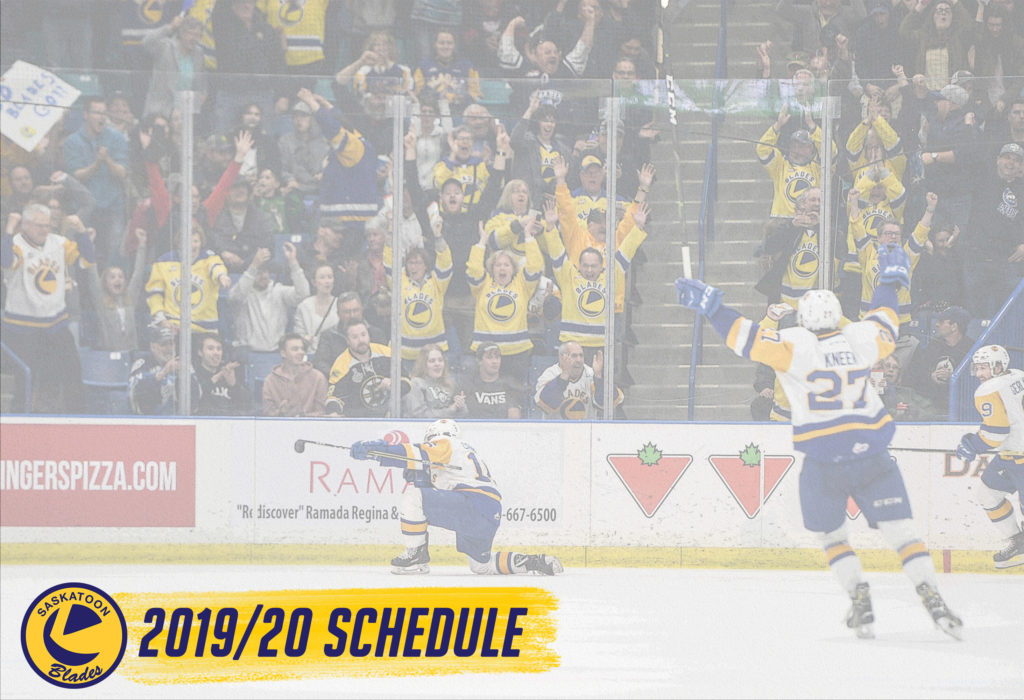 Saskatoon, Sask. — The Western Hockey League has unveiled the full schedule for the 2019-2020 regular season. The Saskatoon Blades will open on the road in Prince Albert on Friday, September 20th, and close out the season against the Raiders on home ice on Saturday, March 21st. Saskatoon will host Prince Albert on Saturday, September 21st for the Blades’ home opener.

A notable change to this year’s schedule is the divisional matchups. The Saskatoon Blades will play the Prince Albert Raiders ten times in the regular season and all other East Division opponents six times. The East Division will also have a different look this season with the Winnipeg ICE joining the East and the Swift Current Broncos shifting to the Central.

This season is the Blades’ turn to visit the U.S. Division which begins on November 20th in Spokane and wraps up on November 27th in Tri-City. The journey will also have a couple extra stops on the way home in Lethbridge on November 29th and Medicine Hat on November 30th.

This also means teams from the B.C. Division will be visiting Saskatoon this season beginning with the Vancouver Giants on October 9th, the Kelowna Rockets on December 7th, the Kamloops Blazers on December 13th, Prince George on January 11th, and the Victoria Royals on January 28th.

Saskatoon will play on two holidays during the season; on the road in Calgary on Thanksgiving Monday on October 14th and at home to the Winnipeg ICE on Wednesday, January 1st at 2:00pm.

The busiest day of the week for the Blades is Friday night with 22 games; Saturday is a close second with 21. Games are divided into days of the week below:

Stay tuned for details on Blades training camp and the 2019-20 promotional schedule which will be released in August. For ticket information or to inquire about becoming a Saskatoon Blades Season Member please contact the Blades’ office at 306-975-8844 or email info@saskatoonblades.com