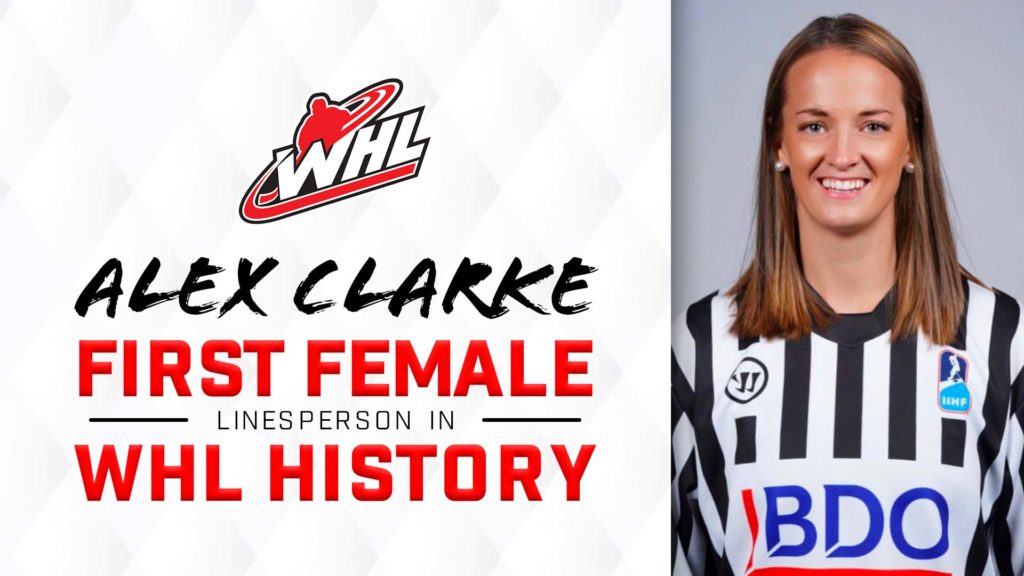 Calgary, Alta. – The Western Hockey League announced today that Alex Clarke will become the first female linesperson in WHL and Canadian Hockey League history when she takes to the ice tonight for the WHL Pre-Season game between the Regina Pats and Moose Jaw Warriors.

Clarke, a native of Weyburn, Sask., is set to become a member of the WHL Officiating team for the 2021-22 season after officiating at the 2021 IIHF Women’s World Championship in Calgary, Alta.

“I am extremely excited for the opportunity to join the WHL as a linesperson,” Clarke said. “I have been working towards this for several years now and I believe my development has reached the level required to perform in the WHL. I’m looking forward to the challenges and growth the WHL will bring to my officiating journey, and I’m excited about the potential for other female officials to enjoy similar opportunities in high-level male hockey.”

“For the past several years we have been monitoring Alex’s development and progression as an official,” said Kevin Muench, WHL Senior Director, Officiating. “She has been highly successful in Junior A and her recent performance at the IIHF Women’s World Championship was highlighted by her assignment to the Bronze Medal game. She has proven she is ready to take the next step in her career by earning the opportunity to be on the ice in the WHL.”

“On behalf of the WHL and all our member Clubs, we wish to extend a warm welcome to Alex Clarke as she joins our WHL Officiating program,” commented WHL Commissioner Ron Robison. “Alex has proven herself to be a world-class linesperson and we look forward to her continuing her development as an official in the WHL.”

Aside from her experience on the international stage, Clarke has skated in nearly 300 games in Saskatchewan since the 2017-18 season, including in the:

Prior to donning her officiating stripes, Clarke played four years at College of St. Scholastica (NCAA – Division III) in Duluth, Minn., captaining her team during her final season (2014-15). Through 107 career regular season games, Clarke tallied 63 points (12G-51A) as a defender.

Following her college career, Clarke was drafted by the Calgary Inferno of the Canadian Women’s Hockey League (CWHL) but was forced into retirement due to a knee injury. Since retiring in 2015, Clarke has been officiating as a member of Hockey Saskatchewan.

Clarke’s first official assignment in the WHL is scheduled for tonight at Mosaic Place in Moose Jaw when the Warriors welcome the Regina Pats (7 p.m. MT).

The 2021-22 WHL Regular Season is scheduled to begin Friday, October 1, with seven games on the schedule, each of which is available to watch on WHL Live on CHL TV. 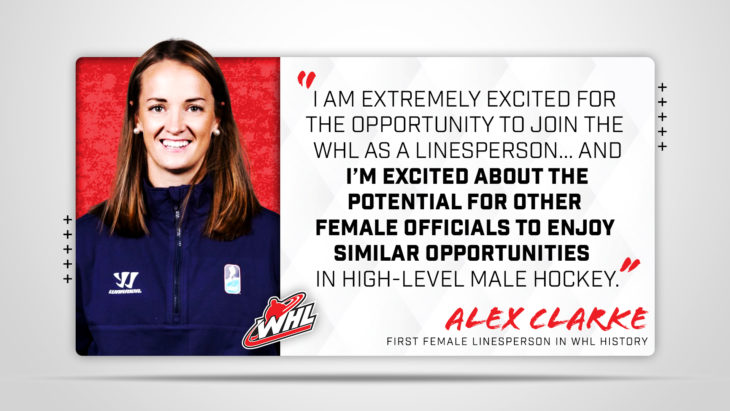