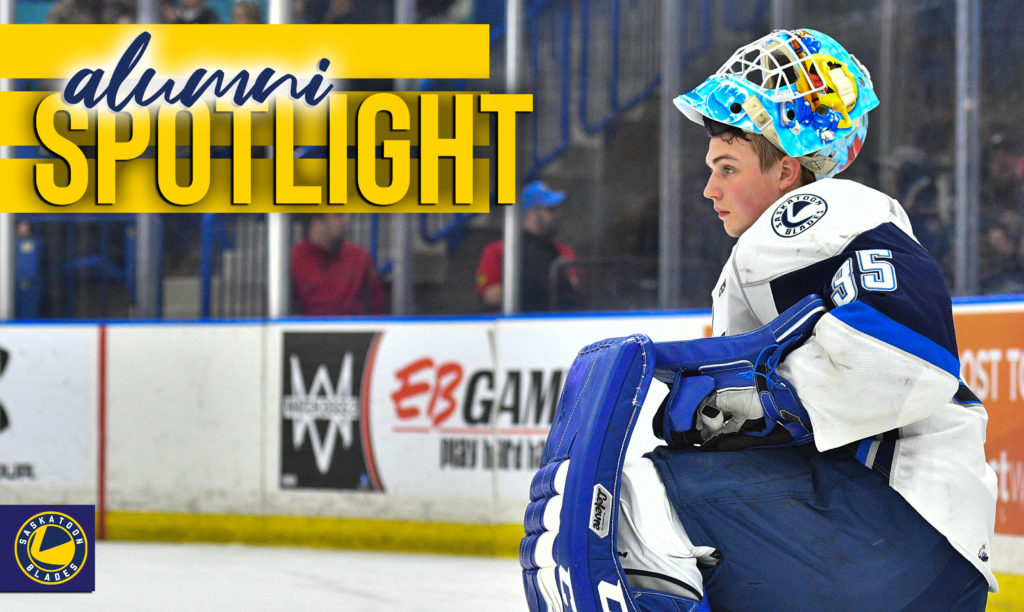 For decades, the Western Hockey League has been a stepping stone for talented, young hockey players to move on and have successful careers in University athletics. The Saskatoon Blades have played a key part in that process, helping many former players earn an affordable, quality education while continuing to compete at a high level.

In this version of “Alumni Spotlight”, we’ll dive into the careers of eight former players who donned the Blue & Gold in their careers, and are now representing their U-Sports squads (and beyond) for the 2021-22 campaign.

Since signing off on his long-standing WHL career following the 2017-18 season, Logan Flodell has become a placeholder at Acadia University in Nova Scotia. The Regina, SK native is entering his third campaign with the Axemen, and his strong play and work ethic has earned him a place with Team Canada’s U-Sports squad to compete 2021 FISU Winter Universiade. Flodell is one of three goaltenders who will wear the maple leaf in Lucerne, Switzerland from Dec. 11-21. Flodell isn’t the only local connection on the roster, as he’ll join Saskatoon product Connor Hobbs on the team as well.

It’s hard to forget a guy like Scott Walford, considering the amount of respect he had from his teammates and fans through the course of the 2019-20 season. The former assistant captain repped the Pacman for one season, which was halted suddenly due to the COVID-19 pandemic, notching 54 points in 61 games.

Despite the circumstances of cutting his final WHL season short, the Coquitlam, BC product stayed positive and signed on with McGill University in the off-season of 2020. Despite having to wait a full calendar year before making his McGill debut, the reliable defender never lost sight of a promising university career in Montreal. In 12 games with the Red Men, Walford has one goal and four assists.

Walford suited up alongside Quebec’s top university players for an exhibition game against the Montreal Canadian’s rookies in September. Read up on the match HERE.

A new addition to McGill University, former assistant captain Caiden Daley is taking a similar path to former teammate Wyatt McLeod. The two-year Blade opted to pursue U-Sports following the 2021 Hub Season, and has been red-hot to start his freshman campaign. Daley sits tied for second in team scoring with eight points in 11 games, and leads the Red Men with six assists.

Daley chatted with us following his final game in the WHL, opening up about his five-year career and some of his greatest memories from his days touring through Western Canada. Click here to read up.

There was chatter about Wyatt McLeod jumping straight into a long-standing professional career following his final year in the WHL, but the burly, two-way defender opted to sign with the University of Alberta Golden Bears for the 2021-22 campaign instead. But that’s not to say pro hockey isn’t in the cards further down the road, considering the eyes he’s catching from NHL brass across North America.

McLeod spent one season with the Blades, wearing blue and gold for 24 games in Regina’s Hub last spring. Following his final game, the Dawson Creek, BC native signed with the Colorado Eagles of the AHL, and linked up with their farm squad, the Utah Grizzlies, for the rest of the 2020-21 season.

🎥 Wyatt McLeod spent the bulk of his WHL career with the @EdmOilKings, before playing the 2020-21 campaign with @BladesHockey.

Join us for another installment in our continuing Class of 2021 series! pic.twitter.com/RqDu544cSr

McLeod’s four points over the course of 15 games earned him an invite to Tampa Bay Lightning training camp in the tail end of the 2021 off-season. Although he was released from camp without a contract, his exit opened the door for him to ink his name onto the Golden Bears championship-winning roster.

McLeod is far from the only former Blade to make waves in Alberta’s capital. Former assistant captain Dawson Davidson is entering his second year competing with the U of A Golden Bears, and has already notched four points in 10 games.

The Moosomin, SK product has found tremendous success competing among U-Sports finest, and earned a spot on Canada West’s All-Rookie team in his freshman 2019-20 campaign after leading the team in scoring.

While we’re on the topic of the U of A Golden Bears, check out this filthy tally from former Blade Gary Haden.

GARY HADEN! TIE GAME!! Haden finds the top corner, and we are tied at 2-2! pic.twitter.com/Kj1LHzD2BR

Formerly referred to as ‘Uncle Gary’ in the Blades universe, Haden is entering his first official season wearing green and gold. The Airdrie, AB product suited up in 55 games for the Blades during the 2018-19 campaign, notching 30 goals and 32 assists.

Redirecting our attention back on Saskatoon soil, former captain Evan Fiala continues to leave a good impression at his hometown University of Saskatchewan, entering his third campaign with the Huskies. The defenceman’s picked up two assists this season, helping the pups earn five victories in six suit-ups.

Fiala was one of the most well-versed defenders in Blades recent history. A rare member of the 500 PIM club, the Clavet, SK product racked up 17 goals and 53 assists over his illustrious five-year WHL career. Mitch Bach and Les Lazaruk caught up with the former Blade in an episode of Blades Uncut previously to hear more about his career in the WHL, and what it’s like competing in one of U-Sports most well-established programs. 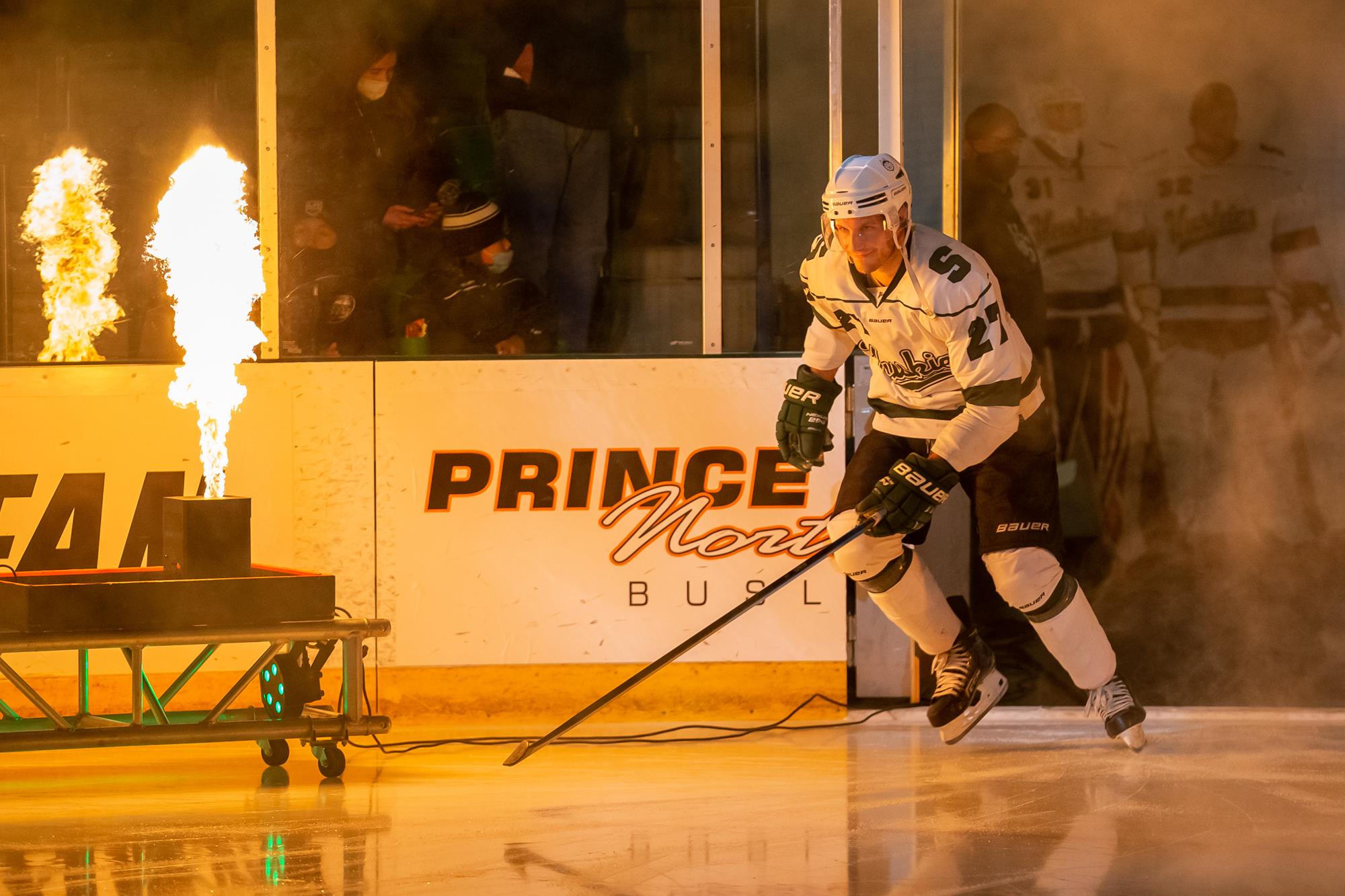 From player to coach, Derek Hulak is beginning a new chapter in his hockey career. The Saskatoon product is linking up with his former team, the University of Saskatchewan Huskies, as an assistant coach under head bench boss Mike Babcock. A four-year member of the Saskatoon Blades from 2006-07 to 2009-10, this is Hulak’s first coaching gig after wrapping up his days as a professional with HC Thurgau in Switzerland.

“I always wanted to find a way to give back and help develop hockey (in Saskatoon),” Hulak told The Star Pheonix after he was hired. “I had some amazing influences in my life and so many people who helped me to be able to live out my dreams, so it’s a pretty unique opportunity. Not everyone gets approached to help coach a team they played for and a program they feel passionate about.”