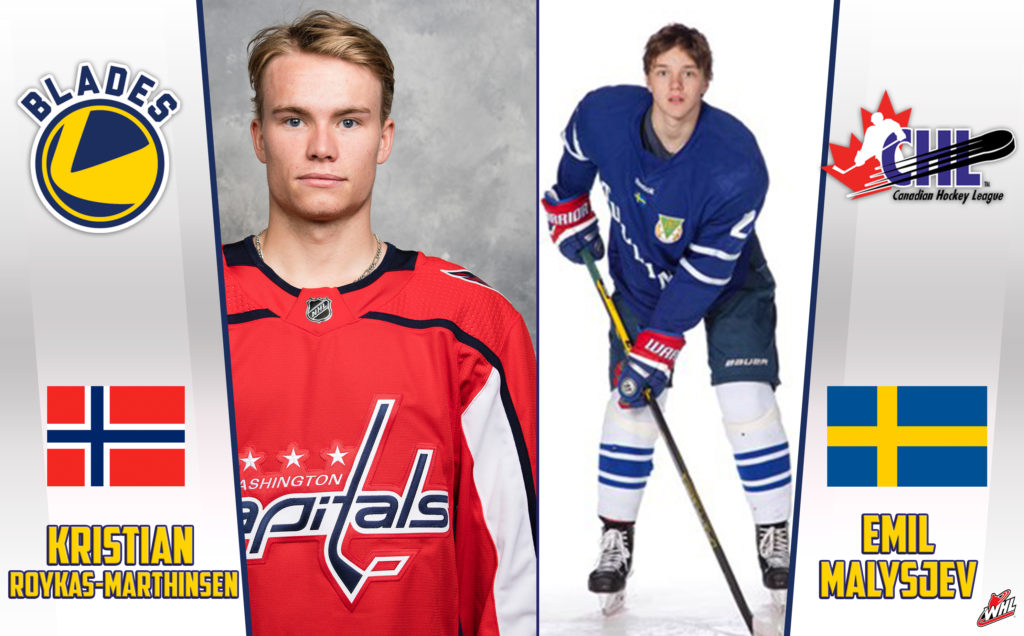 Saskatoon, SK – The Saskatoon Blades made two selections in the 2018 CHL Import Draft on Thursday morning.

The first player taken was 2001 born left-shot defenseman Emil Malysjev from Sweden. Malysjev is a dual citizen as his family is from Russia. Standing at 6’3″ and 187lbs, Malysjev played last season with HV71 in the top Swedish junior league as a 16-year-old. Emil turned 17 in May and is already on the radar for the 2019 NHL Entry Draft.

With our first pick in the 2018 #CHLImportDraft we are proud to select Emil Malysjev from Sweden 🇸🇪 pic.twitter.com/DIbP457m73

“Emil is a big, mobile defender who played on a championship team with HV71 in the top Swedish junior league last season,” said Blades General Manager Colin Priestner following the draft. “We spoke to several NHL teams about him and they all felt he was an excellent prospect for the 2019 NHL draft. He’s a got a great first pass and is a strong, responsible defender.”

With our second pick in today's #CHLImportDraft we are proud to select Kristian Røykås Marthinsen from Lørenskog, Norway. 🇳🇴 pic.twitter.com/LgxzIBUTm9

In the second round the Blades selected 1999 born forward Kristian Roykas-Marthinsen from Norway. Roykas-Marthinsen, who stands at 6’0″ tall and 186lbs, was drafted in the 7th round of the 2017 NHL Entry Draft by the Washington Capitals. The speedy Norwegian put up 23 goals in 23 games last season in Sweden’s top junior league and has represented his home country on the international stage for the past two seasons; once in the World U18 Championships where he posted eight points in five games, and then again this past season at the World Junior Division 1B tournament.

“Kristian is a bit under the radar because he’s a Norwegian playing in Sweden, but he was drafted by Washington last year and speaking with their management they feel he is a great candidate to come to the CHL to continue his development,” explained Priestner. “He is very quick, has an excellent shot, and he led his league in goal scoring this past season.”

Roykas-Marthinsen is currently attending his second NHL development camp with the Washington Capitals where he will get an early introduction to one of his Blades’ teammates, Eric Florchuk. Kristian will turn 19 in August.

Both Emil and Kristian are expected to report to Saskatoon for training camp which is scheduled for the end of August.

Welcome to the @BladesHockey family fellas. See you both at training camp https://t.co/zLvkenFMNZ

Recent import picks from the Blades: