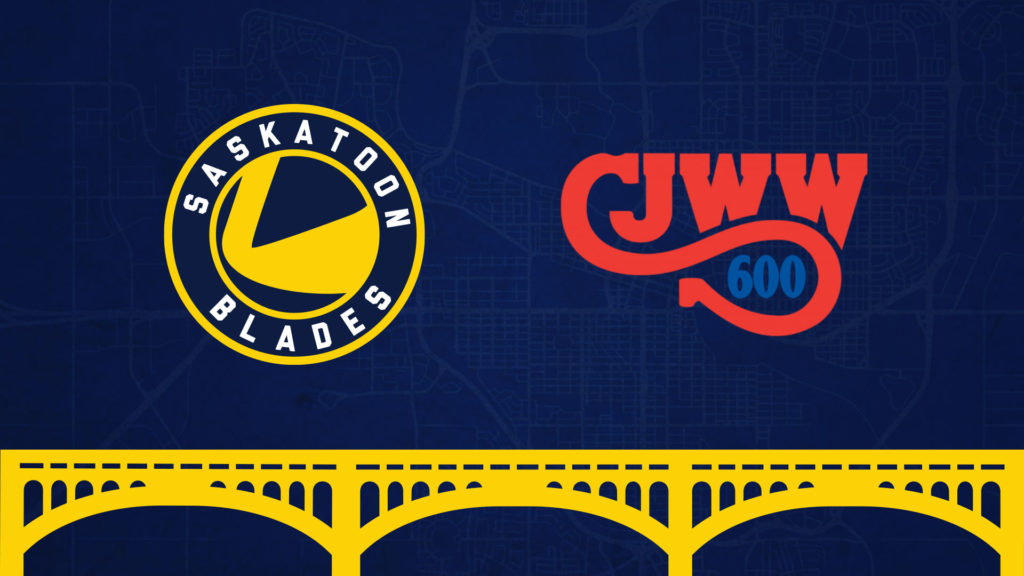 SASKATOON, SK — The Saskatoon Blades Hockey Club and Saskatoon Media Group (SMG) have agreed to new terms on its existing partnership which will make 600 CJWW AM radio the home for Blades hockey broadcasts from 2022-2025.

“Making the move over to CJWW last season was important for us to create some consistency coming back over to the AM dial,” commented Blades Director of Business Operations Tyler Wawryk. “We wanted to create the new home for Blades hockey last season so getting some term on the contract was important to us and for our fans as well.”

Wawryk believes moving back to AM radio was successful last year, which is why the organization found it important to strike a new long-term deal.

“We’ve appreciated being on some of the different stations at Saskatoon Media Group, but moving back over to 600, which was the original home of Blades hockey on the radio, just has a wider range to cover.”

The new agreement continues the longest-running broadcast partnership for the hockey club in its 58-year history. Les Lazaruk, the team’s long-time play-by-play broadcaster, will return as the voice of the Blades for his 29th season his year. Lazaruk surpassed the 2000 games called mark last season in early February. CJWW Radio will continue to carry broadcasts of every Blades playoff game, following the regular season.

“It’s with great enthusiasm and energy that I return for seasons 29, 30 and 31 as the play-by-play announcer for Saskatoon Blades’ hockey on CJWW,” expressed Les Lazaruk, the voice of Blades hockey.

“Doing Blades’ radio broadcasts is what makes me want to wake up and greet each day, especially when one considers all we have gone through in the last 30 months! However, as the late, great broadcast legend Vin Scully used to say, “I need you more than you need me.” I look forward to bringing you Saskatoon Blades’ action with all the professionalism and excitement I can muster.”

The Blades agreement last season to switch back to 600CJWW airwaves was the first season since 1999 that a Blades game was broadcast on AM radio. In 1999, the team moved to the FM side starting with Hot 93 before switching to 92.9 The Bull in 2008. FM station 98 Cool FM took over the broadcasting rights in 2018, before switching back to AM in 2021.

“Saskatoon Media Group is very pleased to renew our long-term broadcast partnership with the Saskatoon Blades as we look forward to the 2022-2023 WHL season,” stated General Manager Vic Dubois.

“Blades hockey was first heard on CJWW Radio 28 years ago in 1994, and play-by-play of all games home and away with the Voice of the Saskatoon Blades, Les Lazaruk, will once again be heard on CJWW, 600 on your AM dial. We wish the Blades the best of luck in the upcoming season.”

Every gameday broadcast will feature an in-depth 15-minute pregame show for all regular season and playoff games, hosted by Lazaruk, along with a post-game recap featuring live interviews, analysis, and behind-the-scenes content.

Fans can catch all games, home and away, live on 600 CJWW radio, on CJWWRadio.com, and on the Saskatoon Blades Official App. All game broadcasts will also be available on WHL Live broadcasts all season long.