Blades And T-Birds Swing Deal Ahead Of Import Draft 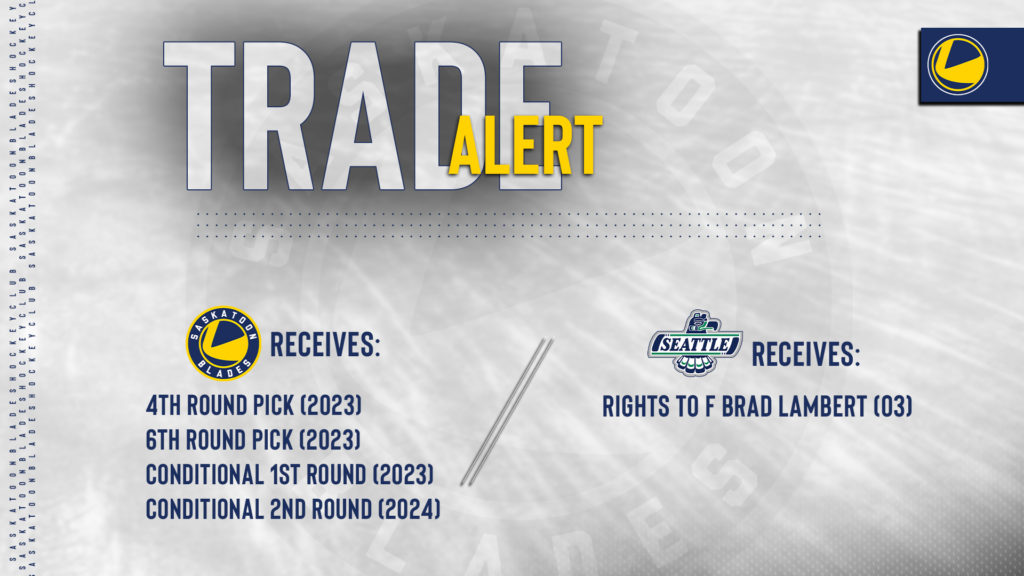 “The timing of our CHL Import draft being held before the NHL Draft made it very difficult to predict since we needed to declare a decision by today if we wanted to use the 37th import draft pick and the NHL Draft is still a week away,” said Blades general manager, Colin Priestner.

The Blades were required to submit their CHL Import Draft declaration by today and had to either trade or drop Lambert in order to use their import pick tomorrow as their other import spot will be occupied by breakout 2004-born Belarusian forward Egor Sidorov.

“This was definitely a unique situation all around given he’s a high profile player with family connections to Saskatoon but we’ve had his rights for over two full years and we felt the odds of him ever playing junior hockey in Canada were quite low and this way we get three good assets guaranteed up front plus two more really high picks if he ever plays in Seattle,” explained Priestner. “We felt after two years of communications we’d exhausted all our options in recruiting him since he’s been playing pro hockey in Finland since he was 16-years-old. His agency also estimated to us they felt it was around a 95% chance he would remain in pro next year so this made the most sense to us to get some good assets now and be able to use the import pick”.

The conditional picks will be sent to Saskatoon if Brad Lambert signs a WHL Standard Player Agreement with Seattle. The 2023 4th round draft pick originally belonged to the Kelowna Rockets. This will allow the Blades to make one selection in Friday’s 2022 CHL Import Draft, selecting 37th overall.

Lambert is also eligible to play in the AHL this coming season, unlike CHL players at his age. The Blades originally selected Lambert in the 2020 CHL Import Draft and have retained his rights up until today.

The 2022 CHL Import Draft will commence at 9:00am Friday, July 1st. Follow along the Blades twitter feed for live updates.