Blades edged by Wheaties in overtime 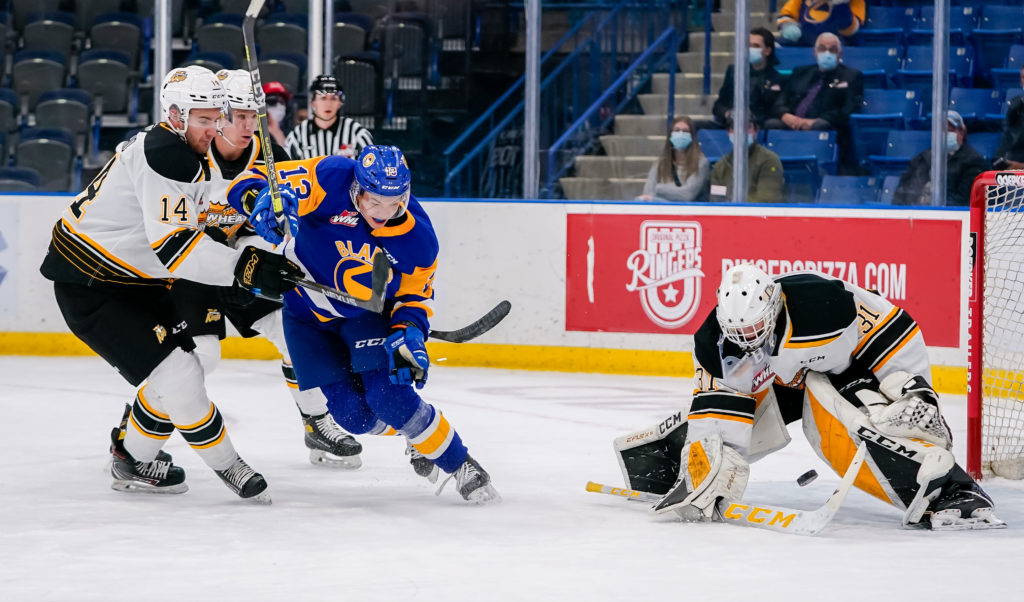 SASKATOON, SK — The Saskatoon Blades took three out of a possible four points in a home and home series with the Brandon Wheat Kings, falling 5-4 in overtime on Wednesday night at SaskTel Centre.

Rookie forward Tyler Parr scored his first career goal, Brandon Lisowsky netted a pair and Tristen Robins picked up a goal and two assists in the setback. Saskatoon falls to 2-1-1-0 on the campaign, and will attempt to return to the win column on Friday night hosting the Medicine Hat Tigers.

Nolan Maier took his first loss in four games, stopping 19 of 24 shots. 16-year-old Carson Bjarnason got the win between the Wheat Kings pipes and stopped 30 of 34.

The Blades started strong in the first, firing the first eight shots on goal before Brandon recorded its first. Moritz Elias had Saskatoon’s best early chance in the slot but was turned away by the Wheaties rookie.

The Blades found the back of the net 8:51 into the game as Kyle Crnkovic was able to pull the puck out of the corner and find Robins for a one-timer. Saskatoon took a 1-0 lead into the second frame.

An eventful second period saw Brandon crack the scoreboard at the 3:01 mark. Captain Ridly Greig was stopped by Maier on a breakaway, but the Wheat Kings found the net moments later as Chad Nychuk buried one shorthanded to tie the game 1-1.

Minutes later, Brandon was awarded a powerplay of their own and took the lead on a play that looked to be offside. After a Blades challenge and lengthy review, the goal stood and Ben Thornton was given credit.

Saskatoon would quickly respond as Robins was able to blow by the Wheat Kings defender in the neutral zone and go in on a 2-on-0 with Brandon Lisowsky. Robins deked to the backhand and set up Lisowsky for a wide-open shot and he made no mistake netting his third goal of the season.

Brandon took the lead yet again as Rylen Roersma was able to pot a rebound to regain the Wheaties lead.

Saskatoon would respond yet again on a powerplay after Spencer Shugrue got cut from a high stick, giving the Blades a four minute man-advantage. On the ensuing powerplay, Crnkovic setup Lisowsky in the slot and it was Tyler Parr who was there to clean up and get his first career WHL goal.

Nolan Maier kept the game tied late in the frame as he was able to make a nice cross-crease save on a Wheat Kings odd man rush. The period would end with five goals split between the two clubs, making the score 3-3.

In the third, both teams played back and forth hockey but nothing came until 7:57 to go.

Vincent Iorio beat his man and found Nolan Ritchie back door to give the Wheat Kings a 4-3 lead.

Nolan Maier would head to the bench for the extra attacker with time winding down and the Blades capitalized with six skaters on the ice. De La Gorgendiere set up Robins for the one-timer and Lisowsky was there with the rebound to tie the game 4-4 with just 49 seconds to play.

In overtime, Ritchie found a streaking Chad Nychuk who spoiled the 2298 in the stands, riffling it over the shoulder of Maier to give the Wheat Kings the win.

Saskatoon struggled on the powerplay going 1/7 while the Wheat Kings were 1/4.

The Blades are back home on Friday night when the Medicine Hat Tigers come to town.