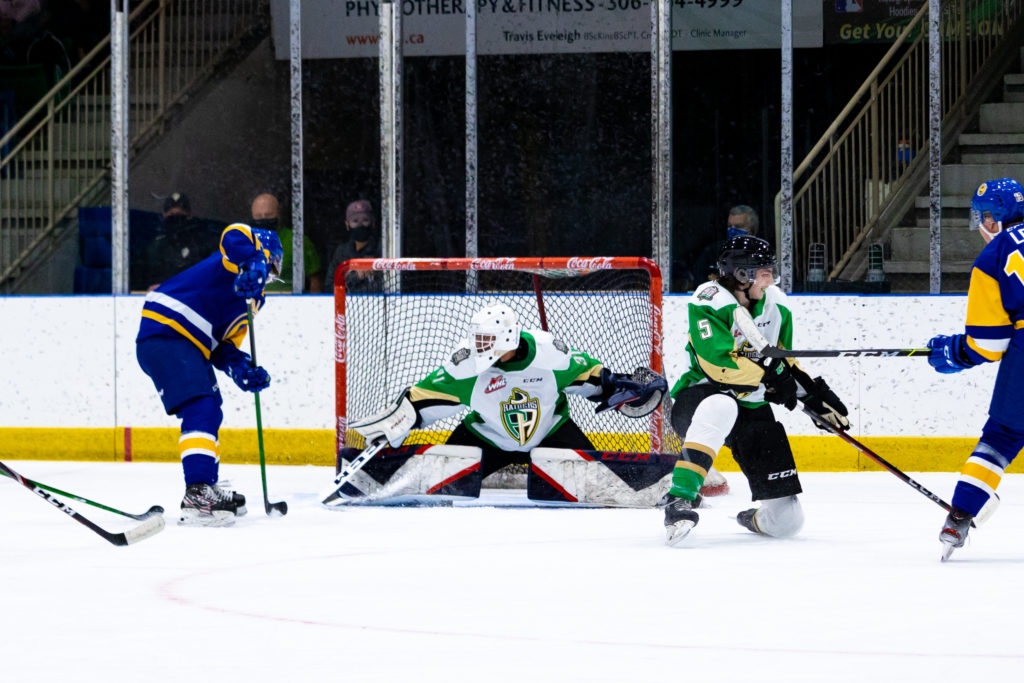 PRINCE ALBERT, SK — Brendan Lee made it happen once again.

The speedy forward notched the game-winning goal off a beautiful play to his backhand, leading the Saskatoon Blades to a 4-2 victory over the Prince Albert Raiders at the Art Hauser Centre on Friday night.

Saskatoon is now 2-1-0-0 in pre-season play, casting last Saturday’s blunder against Edmonton to the side. Prince Albert falls to 1-2-0-0 in exhibition play.

The two Highway 11 Rivals will battle once more on Saturday in front of what’s anticipated to be a packed Legends Centre in Warman (7:00pm).

Lee stretches his goal-scoring streak to three games, having notched a tally in all three Blades preseason contests. Saskatoon also added markers from Brandon Lisowsky and Pavel Bocharov, both of which were in the second period. Last year’s team-leading scorer Kyle Crnkovic iced the game with an empty netter with 27 seconds to go. Crnkovic added a pair of assists to earn the game’s second star, while Lee took first star honours.

Veteran netminder Nolan Maier made 18 saves in the victory, while Ronin Geraghty stopped 29 of 32 shots in the loss.

Prince Albert struck first with a pair of quick goals nearing the end of the opening period. Eric Pearce notched his second of the preseason on the powerplay with 2:01 to play, and Keaton Sorenson followed up 60 seconds later by cashing in on a short-side rebound.

Saskatoon fired 16 shots on Geraghty, most of which over the course of five powerplay opportunities, but couldn’t solve the former Tri-City American. Geraghty, acquired by the Raiders earlier this month, stopped several key scoring chances, including a point-blank one-timer from Blades forward Brendan Lee on a two-man advantage.

Pasha Bocharov stunted Geraghty’s lofty bid for a shutout just 1:06 into the second period after his point shot rebounded off a Raiders defender and in. Import forward Moritz Elias, making his Blades preseason debut, collected the primary assist and Kyle Crnkovic took the secondary helper.

Saskatoon completely erased the deficit off a broken play in the attacking end with less than a minute to go in the second. Lee snapped a low shot that banged the left post before Brandon Lisowsky cashed in on the rebound, squaring the game 2-2.

Lee’s team-leading third of the preseason came off a beautiful one-man effort early in the third. The former Everett Silvertip stripped the puck free of a Raiders defender, undressed Geraghty in tight, and lifted home the eventual game winner.

Prince Albert pressed nearing the later stages of the period, but Maier held his own with several key stops. Crnkovic took advantage of a loose puck in the neutral zone with the Raiders net empty and skated in his third point of the game.