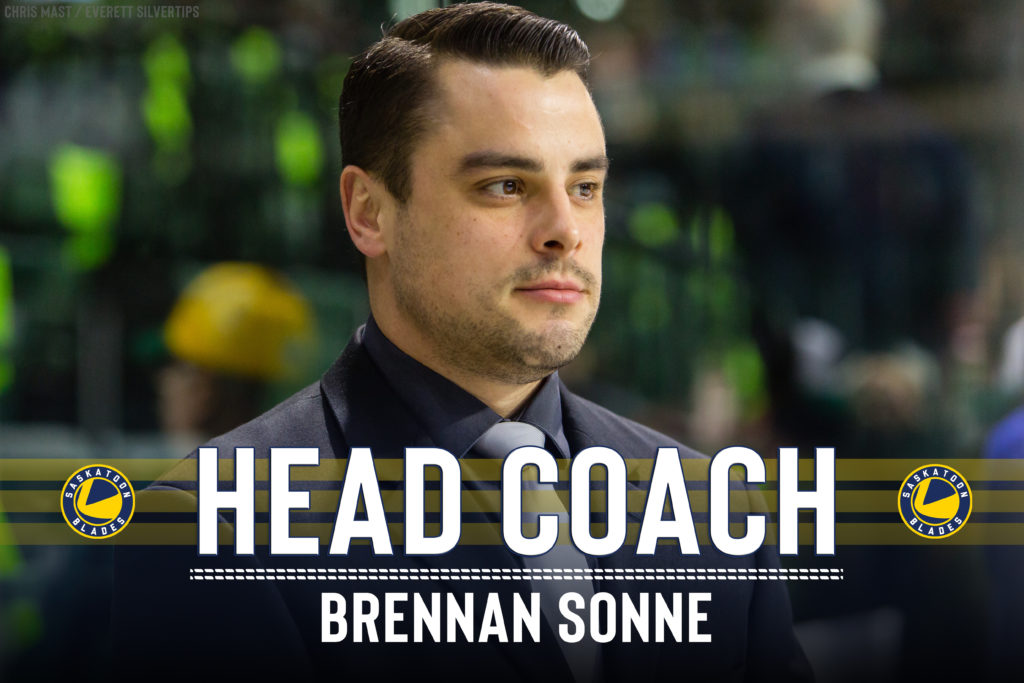 SASKATOON, SK — Colin Priestner, general manager & president of the Saskatoon Blades, announced today Brennan Sonne has been hired as the 18th head coach in the club’s 57-year franchise history. Sonne joins the Blades after spending the last four years as the head coach for the Ducs d’Angers of the Ligue Magnes, the top professional league in France.

Sonne, a 34-year-old product of Maple Ridge, BC, began his WHL career as a left-winger for the Everett Silvertips in 2005-06. Sonne appeared in 149 WHL games spanning across three seasons primarily with the Everett Silvertips, before graduating from junior hockey as an Edmonton Oil King in 2008.

“Today is a truly exciting day for our players, fans and our organization,” stated Priestner. “From the first conversation I had with Brennan I knew he was the perfect person to take the mantle from Mitch and lead our club to our goal of winning a league championship.”

Following his major junior career, Sonne played for the University of British Columbia in the CIS for three seasons before spending one year in China lacing up for the Hong Kong Tycoons.

In 2014, Sonne retired from playing and accepted a position with his former junior club in Everett as an assistant coach. In three seasons on the Silvertips bench, Sonne helped capture two division pennants, boasting an impressive 123-62-29 combined record. Brennan then travelled overseas accepting the head coaching role in Angers, France in the off-season of 2017.

“Firstly, he is just an absolutely outstanding human being, and that’s the first thing everyone who he’s coached, coached alongside or spent time with has said unwaveringly,” continued Priestner. “I wanted someone who has achieved success by paving their own unique path and thinking outside the box — someone who was dogged in his pursuit of being the absolute best coach he can be.”

Sonne has consistently created a winning culture in every organization he’s been a part of. Priding himself as a passionate, competitive coach, Sonne believes a complete buy-in from every player is a key component in creating a championship team. In each of the last four seasons, he’s brought in winning records in Angers despite being one of the youngest coaches in the league and guiding several players older than him. The 34-year-old most recently led his French squad to a 17-5-2-1 record in a COVID-shortened 2020-21 campaign, finishing 2nd in league standings and ending the year on an 11-game winning streak.

“I am just extremely grateful, humbled, and honoured for this opportunity,” said Sonne. “It’s truly an honour to be a part of such a high-class organization.”

“His intelligence, attention to detail, work ethic, and empathy for his players and staff come across instantly when you meet him and I feel every bit as strongly about him as I did about Mitch (Love) three years ago,” added Priestner. “Even though they are very different personalities, they have come from a similar path of sustained winning and they both believe in team success and accountability for all players above everything else. I can’t wait for him to meet our players and get started.”

Sonne and his wife, Kaleigh Storer, will officially make their transition to Saskatoon in the coming weeks and aim to be settled on Canadian soil ahead of training camp this fall.

“My wife and I are thrilled to call Saskatoon home, and can’t wait to get to work with an already well-established hockey operations group, and continue to build upon the solid foundation that is already in place,” added Sonne.

The Saskatoon Blades would like to kindly welcome Brennan and Kaleigh into the organization and the community.