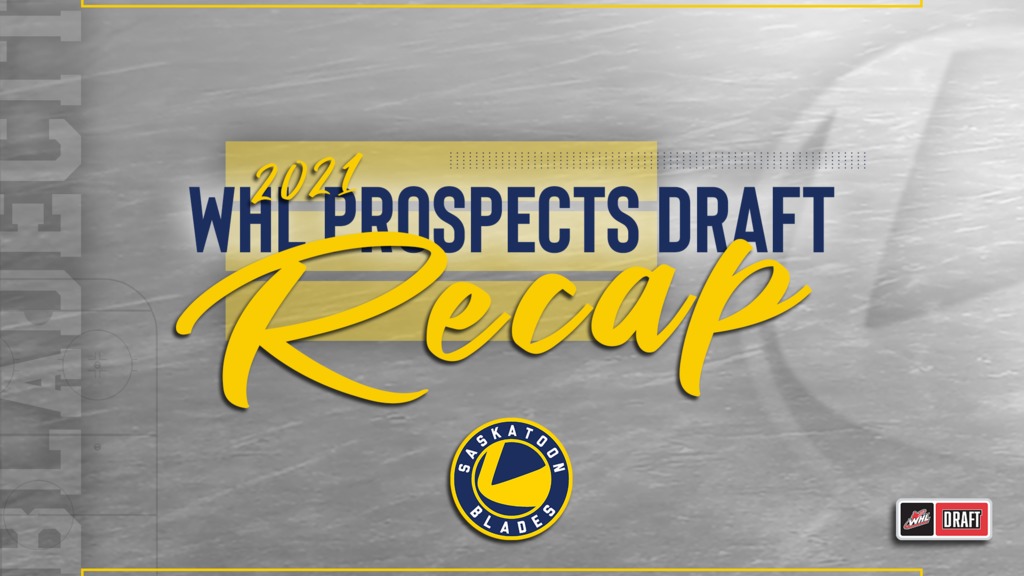 SASKATOON, SK — The Saskatoon Blades are proud to announce 10 selections have been made in the 2021 WHL Prospects Draft.

Hometown product Zachary Moore was the team’s first selection, coming in the second round, 34th overall. The versatile right-winger was the first of two Saskatoon Contacts to be chosen by the Blue & Gold, with defenceman Morgan Tastad hearing his name called in ninth round.

The picks are comprised of four forwards, five defenceman, and one goaltender. Of the 10 selections, three are from Saskatchewan, four are home to British Columbia, two are Alberta-based, and one is from Manitoba.

For a complete recap of the day’s selections, continue reading below.

Saskatoon’s first selection of the draft came early in the second round, taking Saskatoon’s very own Zachary Moore 34th overall. The right-winger for the Saskatoon Contacts U18 squad is off to a flying start to the 2021-22 campaign, notching 10 goals and seven assists for 17 points in 21 games.

The multi-dimensional forward excels at both ends of the ice, and isn’t afraid to play aggressively, chalking up 16 penalty minutes this season. 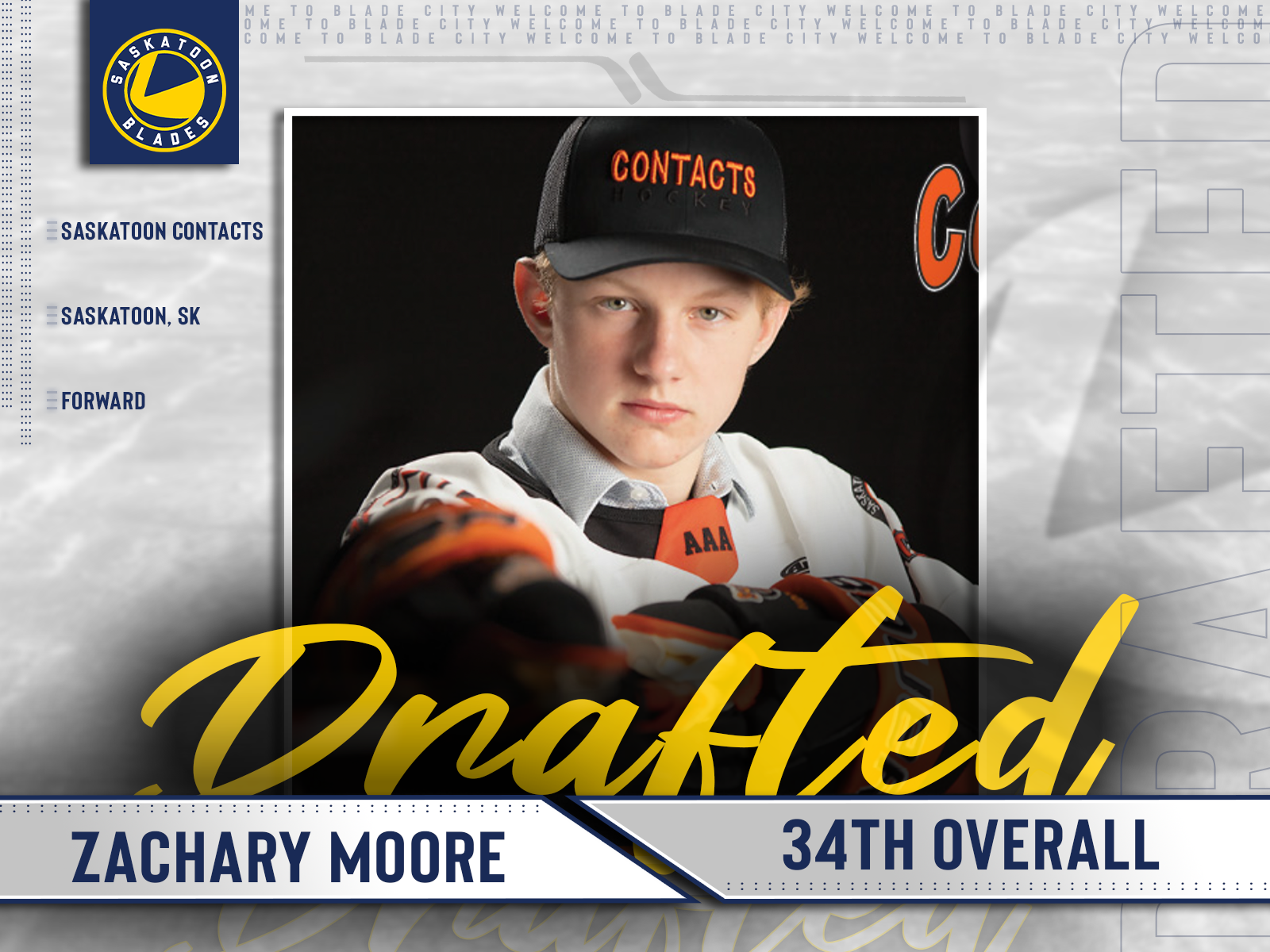 “It’s a great feeling, getting drafted by the Saskatoon Blades,” said Moore moments after he heard his name called. “I grew up watching the Blades and I know it’s a great organization so I’m just excited to be a part of it. Just growing up as a kid, wanting to play in the WHL, you see some amazing hockey players who come out of the organization so it’s just a dream come true.”

A product of Lake Country, BC, Gardner is working on a terrific second season with the Rink Hockey Academy program in Kelowna. The 6-foot-2, 162-pound netminder has started seven games in the U18 ranks, donning a 3.40 goals-against average and 0.909 save percentage. The reliable ‘tender was put to test against his own age group in the WHL Cup earlier this fall, and rose to the challenge tremendously, winning both games for Team BC with a 1.00 goals-against average and 0.953 save percentage. 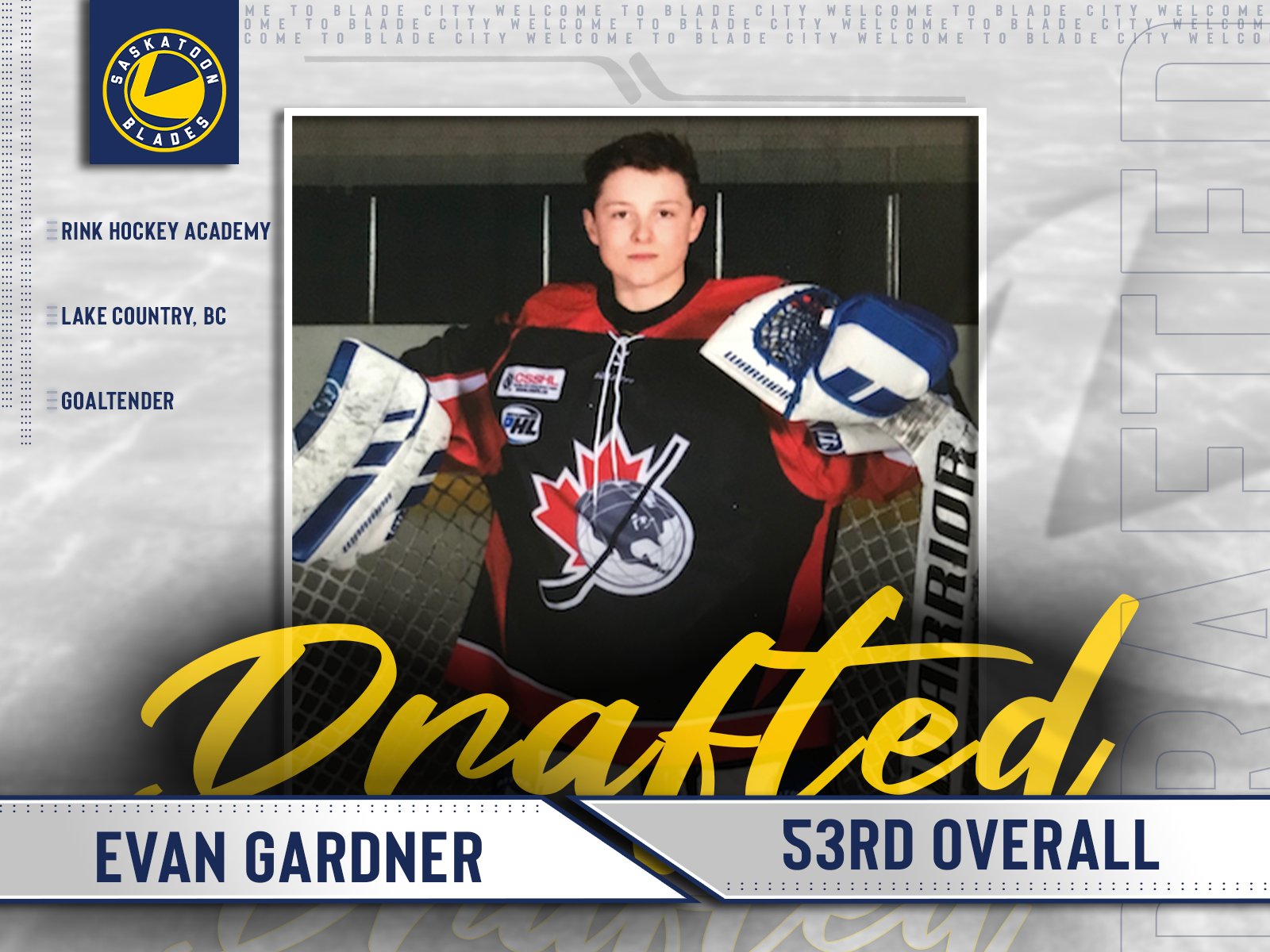 The second of three selections in the third round, Saskatoon stocked up on scoring touch with the selection of Smyth Rebman at 62nd overall. Playing predominantly with Rink Hockey Academy out of Kelowna, the 5-foot-10, 165-pound forward is averaging a point-per-game this season with eight goals and five assists in 13 games. The Prince George, BC centreman has also been called up to the Kelowna Chiefs junior hockey squad for two games, tacking on 12 penalty minutes. 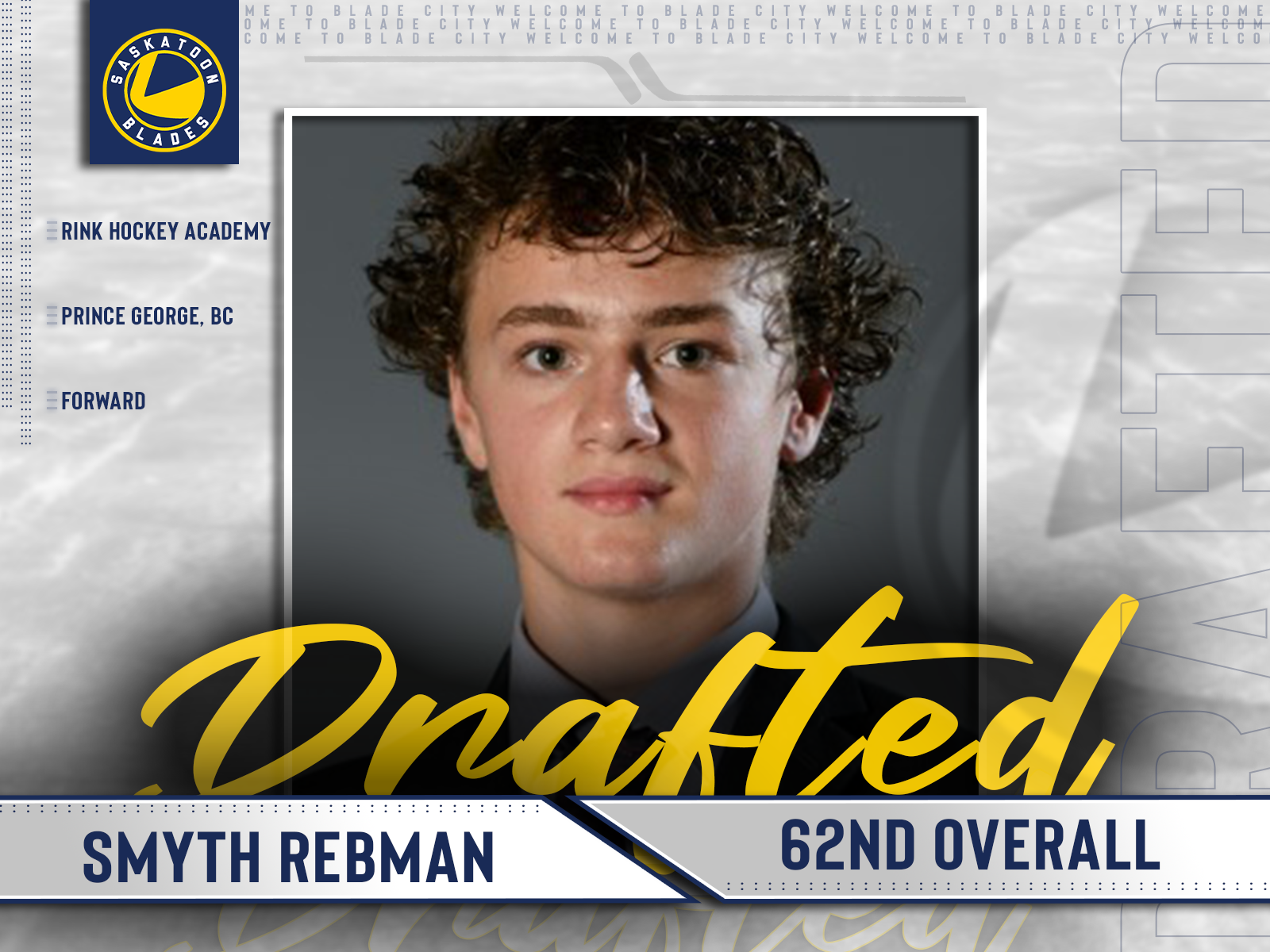 A trusted defenceman for Yale Hockey Academy, EJ Emery is regarded as one of BC’s top-rising defensive talents. After earning the CSSHL’s Top Defensive Award following the 2019-20 campaign, the 6-foot-4 blue-liner has continued to excel at the U17 and U18 level, scoring 10 points in 15 games combined. The product of Surrey, BC also represented Team BC at the 2021 WHL Cup earlier this fall, picking up two assists in five games. 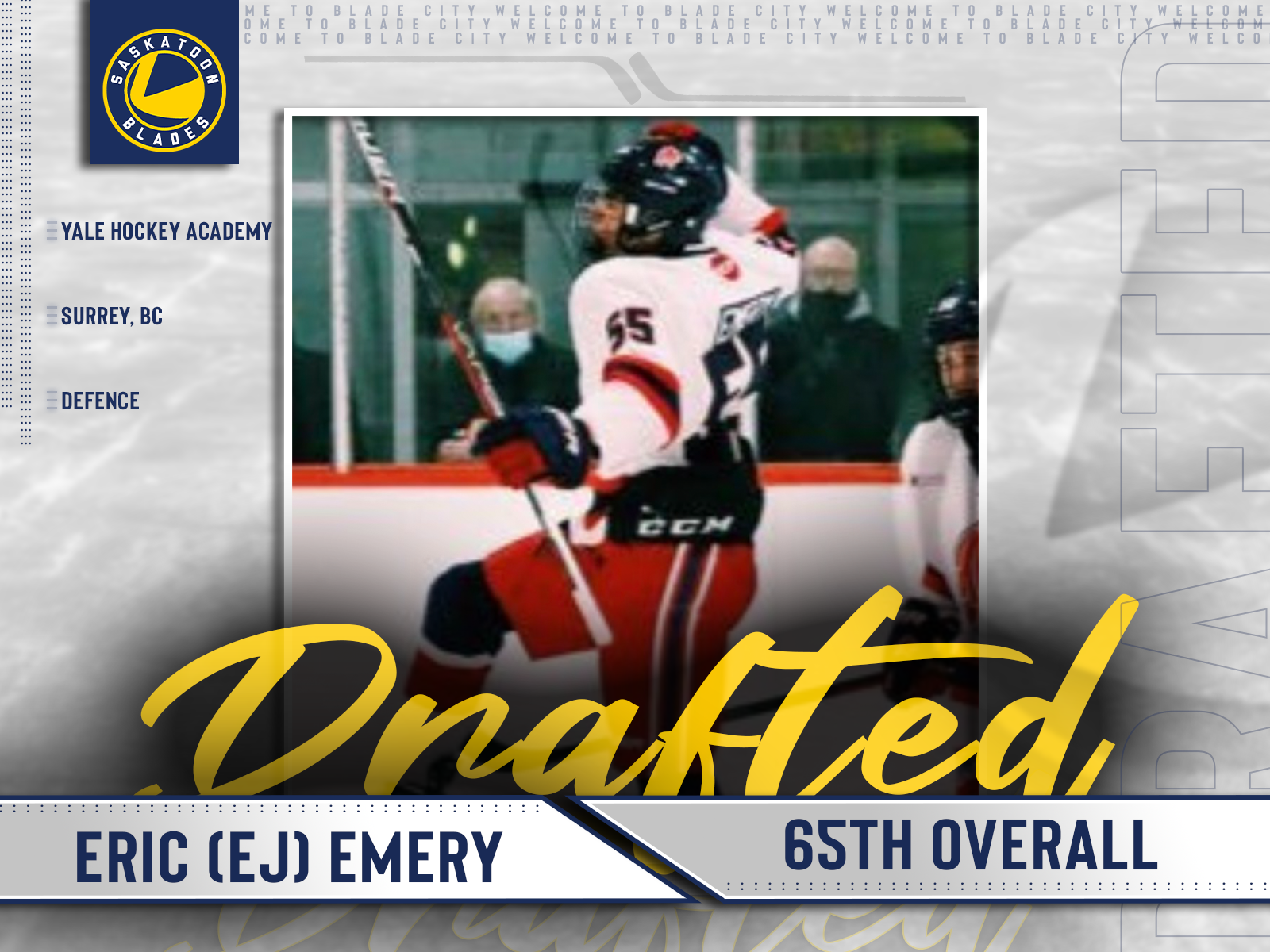 Saskatoon’s second defensive selection of the draft comes out of Cochrane, AB, taking Fraser Leonard at 68th overall. The 5-foot-11, 150-pound blue-liner made the transition from the Airdrie Xtreme U15 squad to Calgary’s Edge Prep School for the start of the 2021-22 season. In 12 games with the U16 squad, Leonard has 13 points — 12 of which assists — on top of 14 points. The reliable defender has also been called up to the U18 ranks, dressing in six games and earning two penalty minutes. 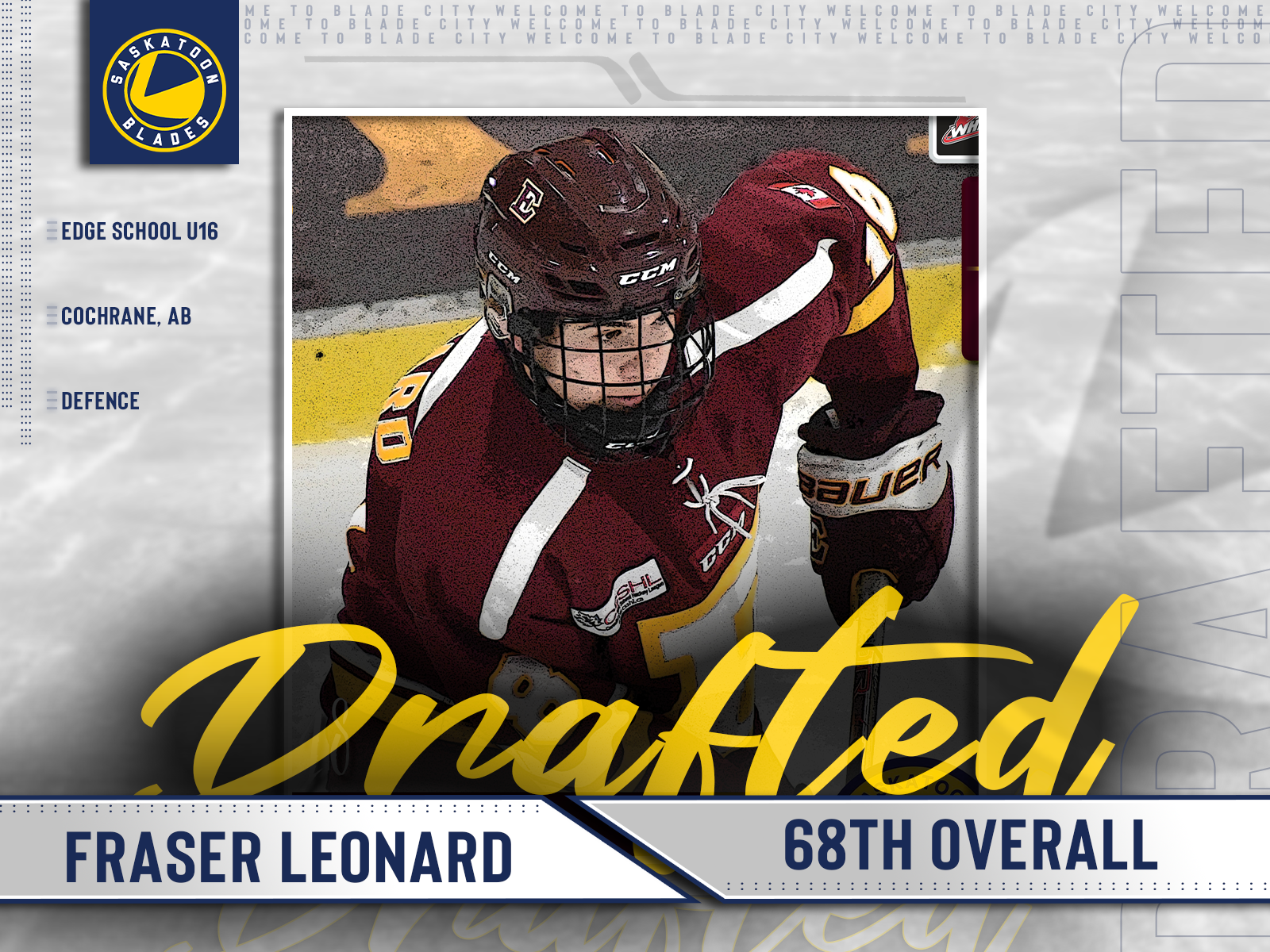 Saskatoon stuck with a young man close to home with their sixth selection of the draft, taking White City, SK’s Ryan Zaremba of the Regina Pat Canadians. The veritile forward has chalked up seven goals and 10 assists in 25 games competing as a rookie in the SMAAAHL. Prior to his days in Regina, the 5-foot-7, 154-pound left-winger piled up 14 points, including five goals, in just four games with the Prairie Storm U15 AA squad. 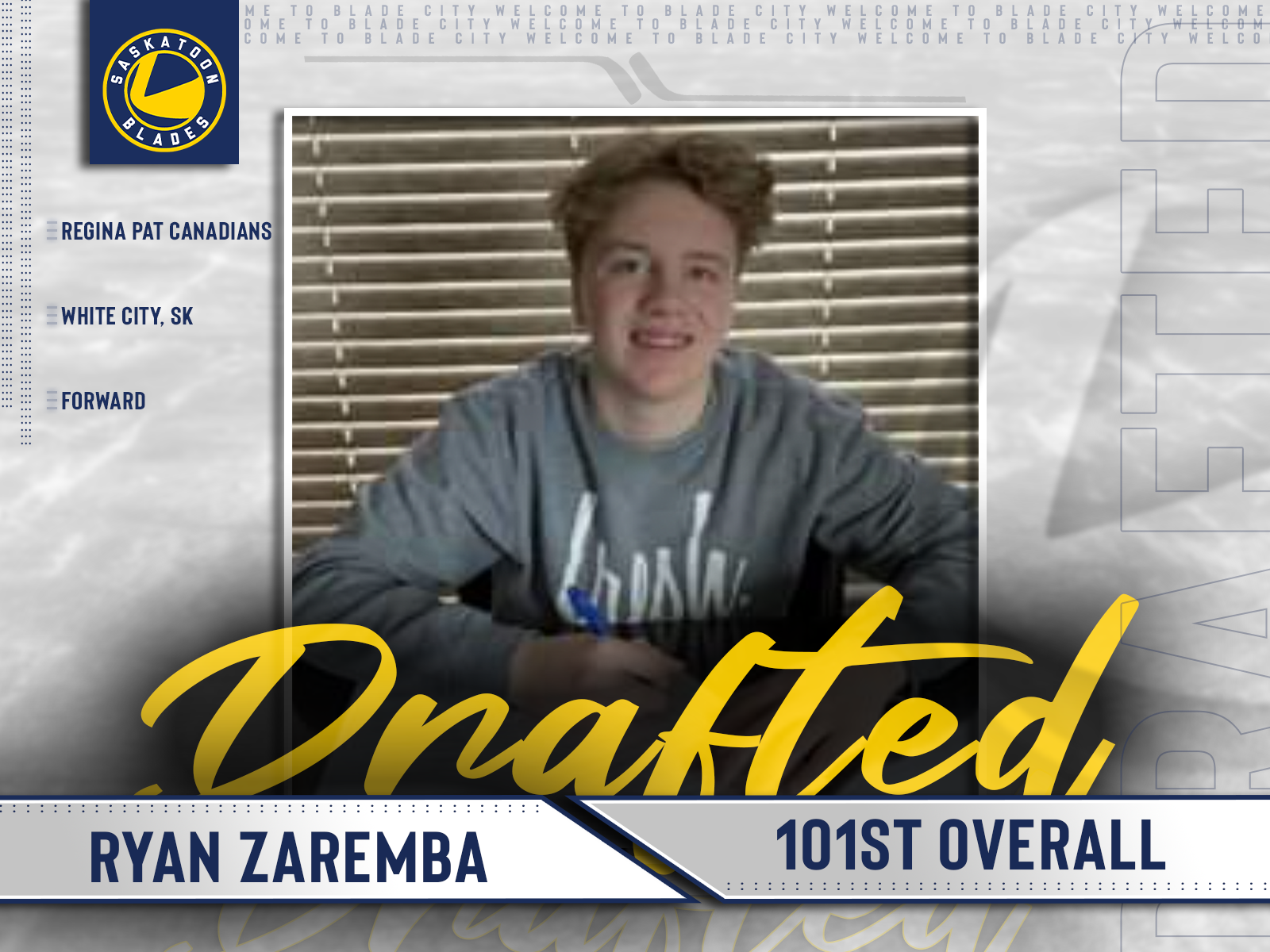 Five picks after taking forward Ryan Zaremba, the Blades added more depth on the back-end in selecting Michael Gallant from Delta Hockey Academy. The Langley, BC product, which is also the home of Blades captain Aidan De La Gorgendiere, has 12 points in 17 games competing in the U17 ranks. Gallant’s impressive play has also earned him the opportunity to play with the U18 squad as an underage defenceman.

Following his selection, Gallant’s father took to social media to express his own excitement.

I am so proud of my son. Great accomplishment, but lots of work now, and thanks to the Blades for their confidence in Michael. Thanks to @DeltaWildHockey and all those who have worked with Michael. https://t.co/lgTbv54Toa

Saskatoon dipped into Canadian talent playing south of the border in the eighth round, selecting defenceman Finn McLaughlin 175th overall. Proven to be a force for the Windy City Storm U15s out of Chicago, IL, the two-way defenceman has piled up 22 points in 28 games — 16 of which assists. The 5-foot-10, 154-pound blueliner is the only player on Windy City to hail from Canada, having been born and raised in Canmore, AB and playing minor hockey in Canmore Minor Hockey until the beginning of this season. 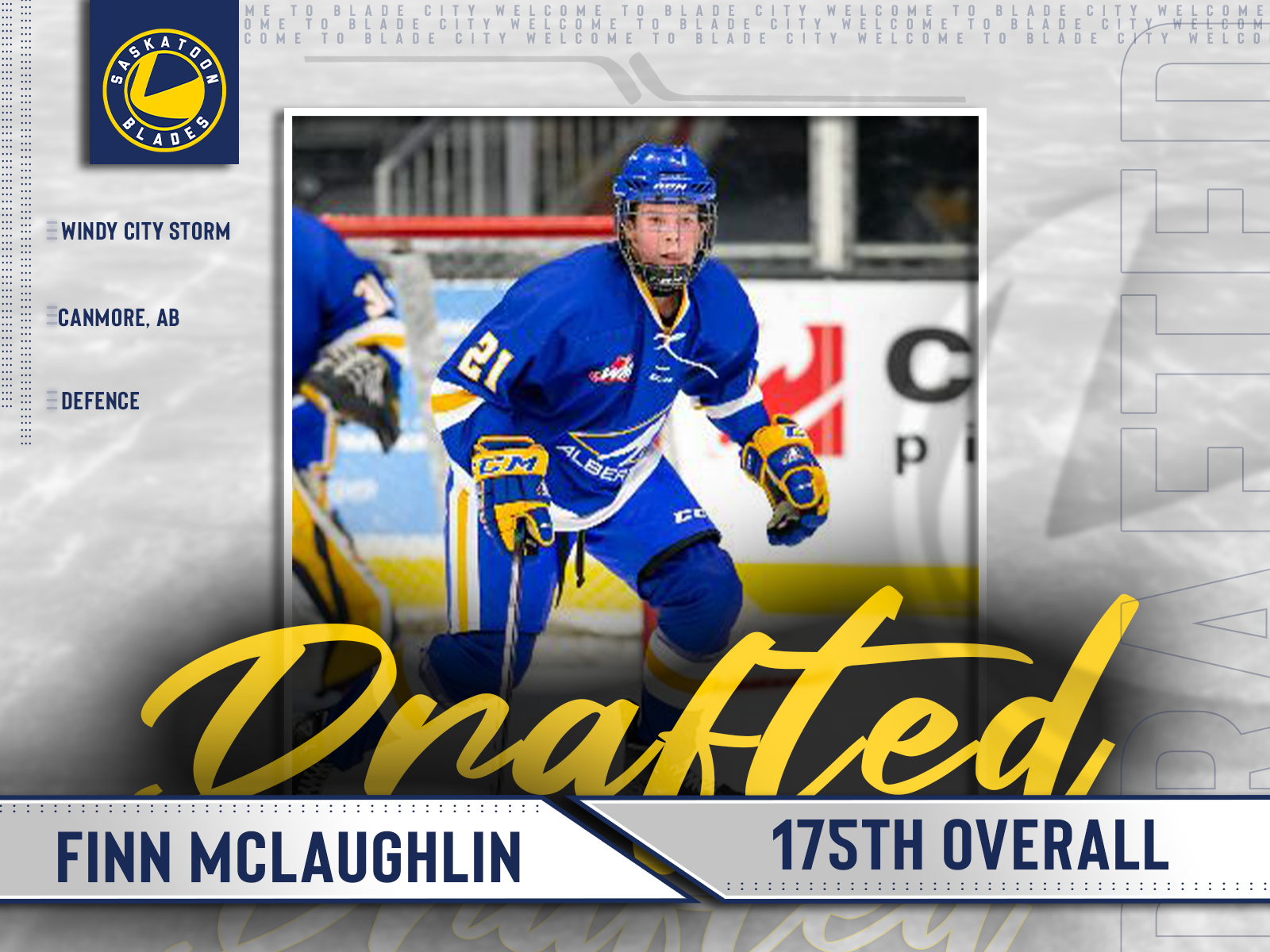 The pride of Loreburn, SK, Morgan Tastad is teammates with second-round pick Zachary Moore. As one of the Saskatoon Contacts’ most reliable defenders, the 6-foot-2, 165-pound left-hand shot has eight points (1G-7A) in 20 games this season, and has proven himself as a reliable two-way defender. Tastad was the fifth and final defenceman selected by the Blades in this year’s draft. 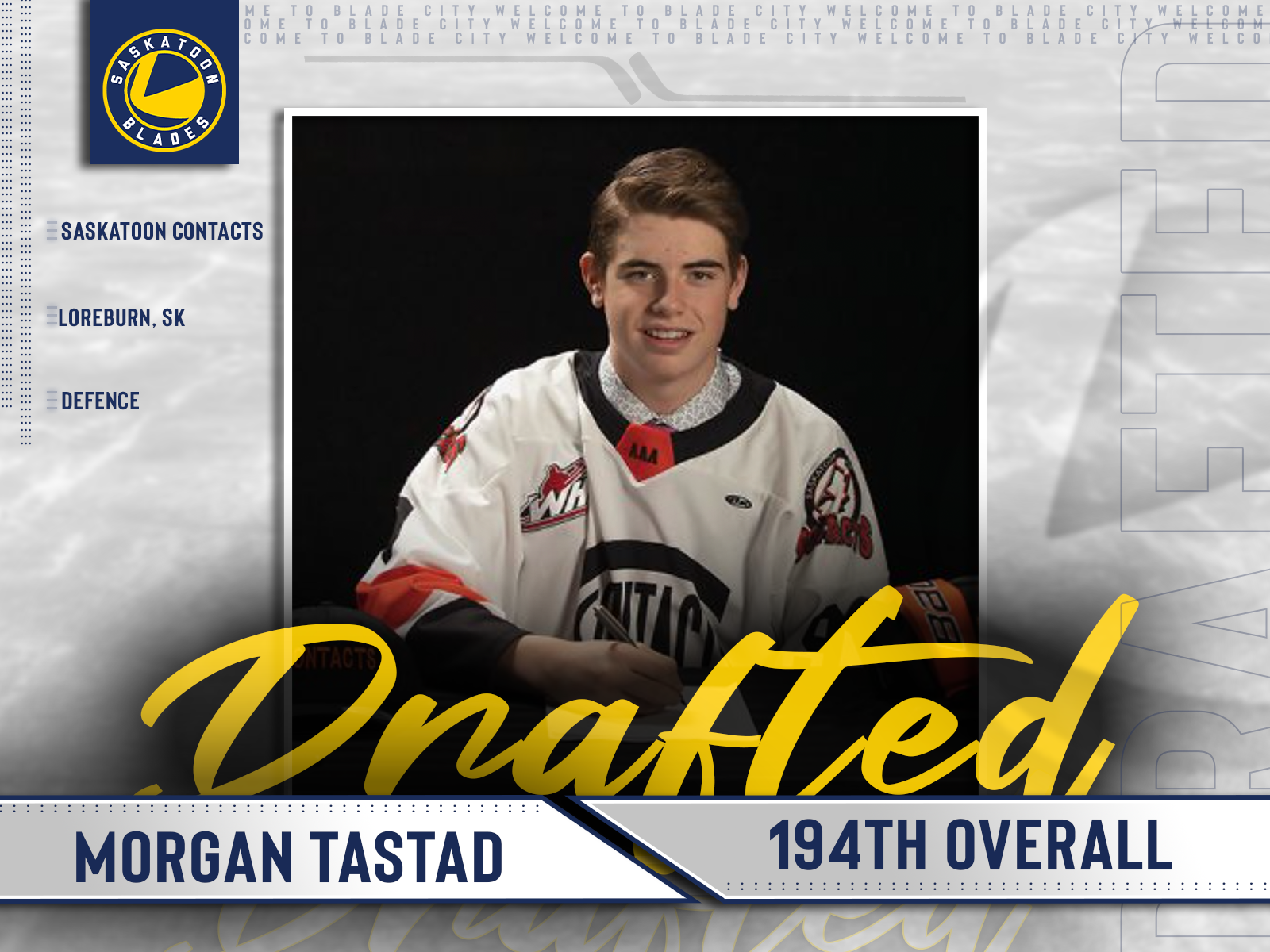 With the final selection of the 2021 WHL Prospects Draft, Saskatoon went east in selecting forward Jackson Kostiuk out of Rink Hockey Academy in Winnipeg, MB. A multi-dimensional player that can play the wing or centre, Kostiuk averages more than a point-per-game, notching six goals and 15 assists in 20 games. The East St. Paul, MB native also recently competed in the coveted WHL Cup, representing Team Manitoba with one assist in five games. 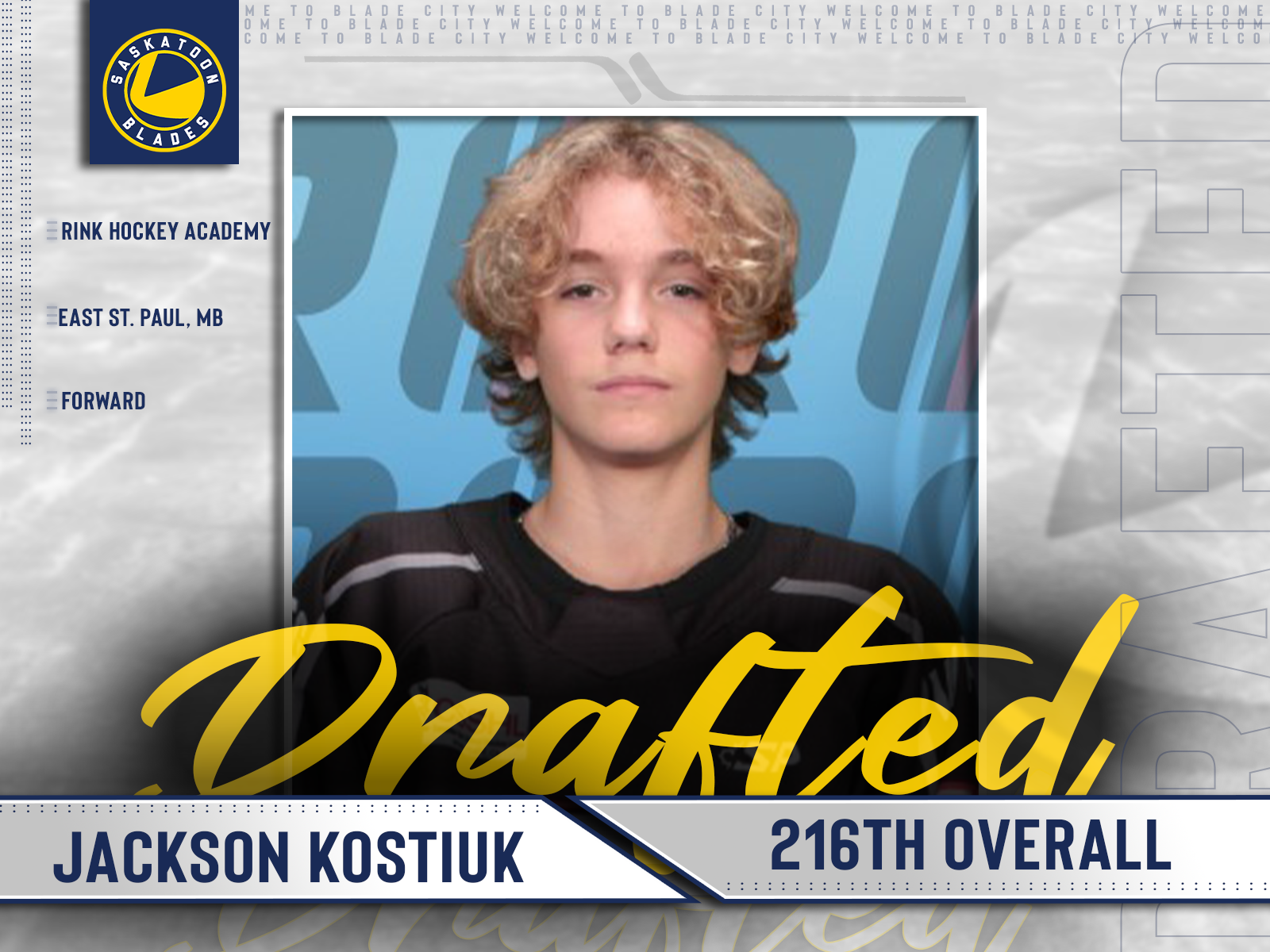