Blades return to action at home Saturday for Western Night 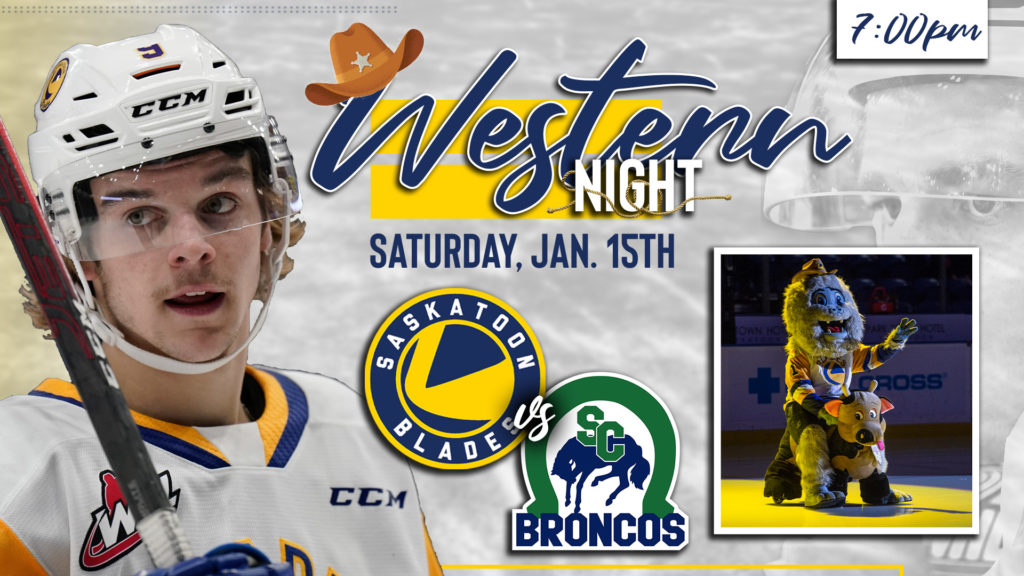 Don’t miss out on “Western Night” at Sasktel Centre on Saturday, for a chance to win some cool prizes! The person dressed in the best western outfit may lasso some free concert tickets to Chris Stapleton in May courtesy of our friends at the 92.9 The Bull.

DJ Kush will be fulfilling all your country music needs, with a special playlist running all night long, and Pokecheck has a few plans up his sleeve as well.

Cowboys and cowgirls need to be quick on the draw, just like the Blades netminders have been all season. It’s “Goalie Appreciation Night,” and the Blades netminders have been nothing short of outstanding. We’re inviting minor hockey goalies for a special presentation featuring several notable goaltenders, who will share their own unique stories ahead of the game. They’ll also discuss what it means to be a goaltender, and what inspired them to strap on the pads when they were young.

Saturday’s contest wraps up a home-and-home series against the Swift Current Broncos, with the two squads meeting Friday night at Innovation Credit Union iPlex. The posse will be taking some extra motivation with them, as four players were just ranked inside the top 140 in the NHL Central Scouting midterm rankings. Starting goalie, Nolan Maier, is heading into the weekend with a .904 save percentage, and 14 wins on the year. Saskatoon took the first meeting this season 4-3 in the shootout, but will look to exact revenge as the Broncos got the better of them last time out 3-0.

Also, don’t forget this is the first of three Raincheck Nights where season ticket members will be able to get full value for their unused tickets, and take in a fantastic night of action!