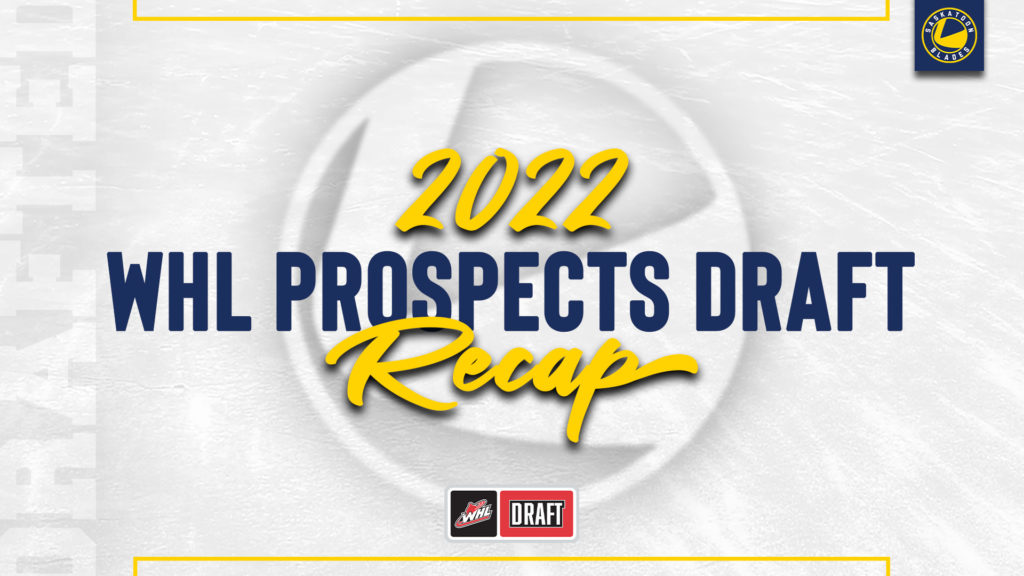 Saskatoon, SK – The Saskatoon Blades added twelve new prospects to the organization during the 2022 WHL Prospects Draft on Thursday. The Blades also made four trades on the day to acquire additional draft picks while also saying goodbye to an impending overage forward.

Albertan born players take up the bulk of the 2022 draft class with four players from Wild Rose Country, three from Saskatchewan including two from right here in Saskatoon, three from British Columbia, and two from Manitoba. By position, the Blades added six forwards, five defensemen, and one goaltender. 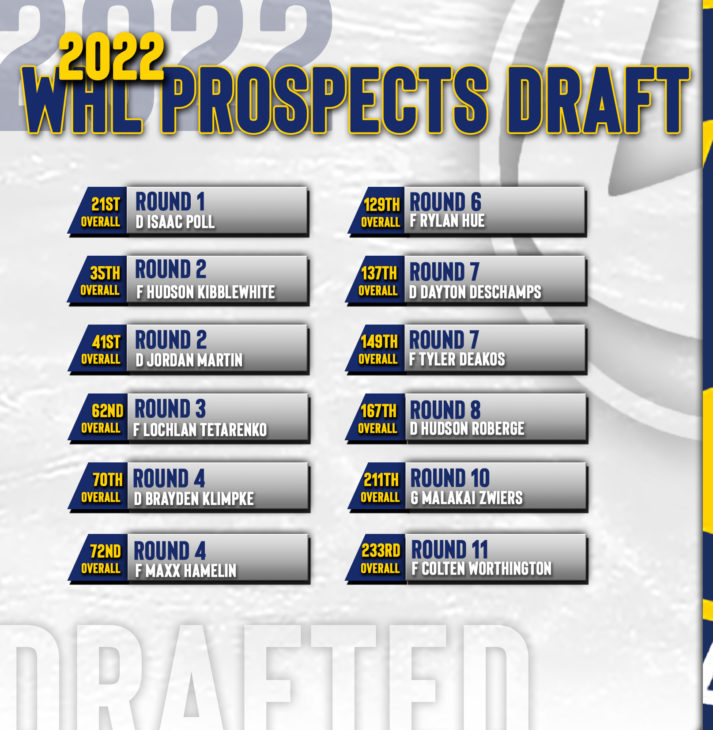 The Blades began the day holding nine picks inside the top 11 rounds of the draft and sitting in the 13th overall position in the first round. The first trade of the day saw Saskatoon give the 13th overall pick to the Kamloops Blazers in exchange for 19th overall, a 3rd round pick, and 129th overall in the 6th round. 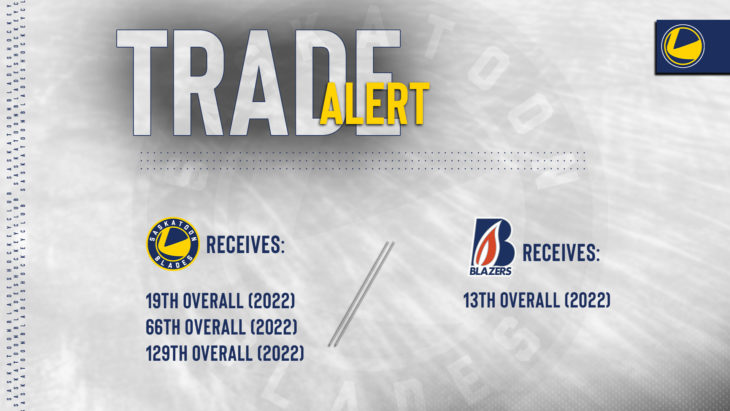 The Blades then made another move with a BC division team, moving down two spots from 19th overall to 21st overall, while also acquiring the 70th overall pick in the fourth round from Vancouver. 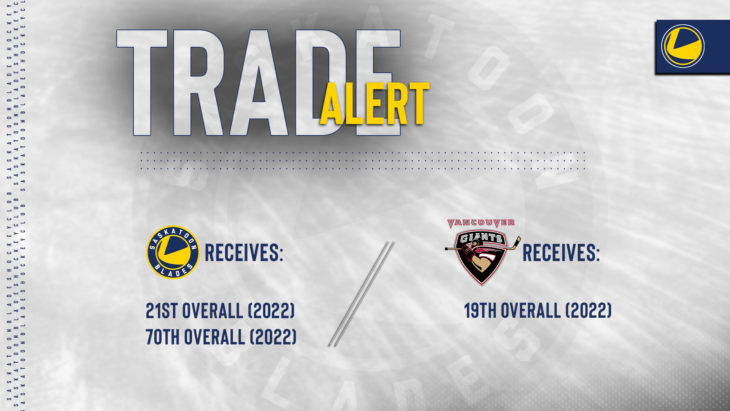 Finally at 21st overall Blades director of scouting, Dan Tencer, announced Saskatoon’s first pick in the draft. Right-shot defensemen Isaac Poll from White City, Saskatchewan, was called. The 6’1″ defender who recently turned 15 earlier this month spent this past season with the U15 Prairie Storm of the SAAHL where he posted 10 goals and 38 points in 26 games. Poll also racked up 31 minutes in the sin bin before added another eight points in seven playoff contests.

“Isaac is a big, rangy, and mobile defender on an excellent development trajectory that we think is just starting to scratch the surface. You don’t often find players with this combination of size, awareness and coordination. He’s a very strong defender who also has very good stick skills and offensive vision and we think he projects to be a high end 2-way player with excellent size and leadership at our level.” – Dan Tencer, Director of Scouting 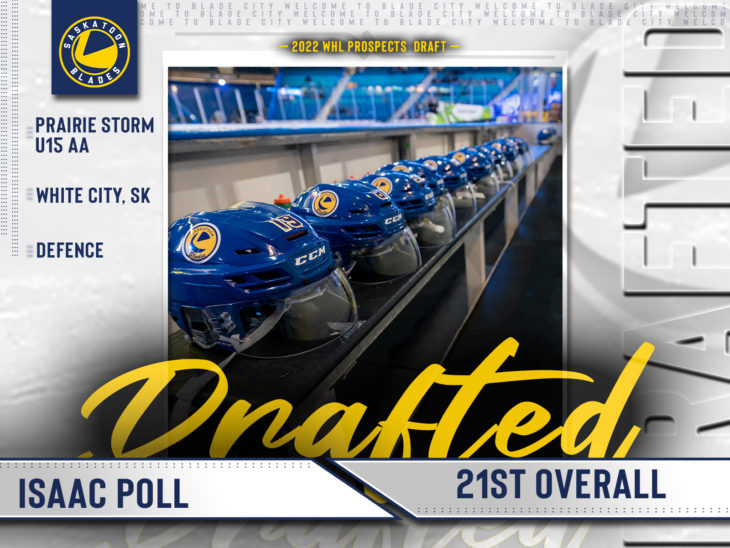 Saskatoon didn’t have much time to reset entering the second round with two picks on the table in short order at 35th and 41st overall. Forward Hudson Kibblewhite from Vernon, British Columbia, was selected with the 35th overall pick. A 5’10” right-shooting centre that spent last season with the Rink Hockey Academy in Kelowna where he posted 19 goals and 61 points in 30 regular season games.

“Hudson is the epitome of consistency and reliability. He’s a player that all of his teammates want to play with because of his ability to drive the energy of a line and his willingness to compete every shift. He’s in all the right areas all over the ice and has the skill to distribute the puck smartly. He’ll be a great leader for us and a player who can play the game in all situations.” – Dan Tencer, Director of Scouting

With our 35th overall pick, we have selected forward, Hudson Kibblewhite 👏#WHLDraft pic.twitter.com/S1CiMUfdsu

Six picks later the Blades scouting staff went back to the blue line with another right-shot defender in Jordan Martin with the 41st overall pick. Martin, who already stands at 6’0″ tall and 181lbs, hails from Abbotsford, British Columbia. In 24 games this season with the Yale Hockey Academy, Martin had seven goals and 28 assists to go along with his 20 penalty minutes.

“Jordan is an extreme competitor on the back end. His willingness to defend with bite and tenacity is second to none. He’s a player that we’ll be comfortable throwing out against highly skilled opponents for big minutes. He has a strong shot and a smart ability to move pucks quickly and will be a very effective defender for us.” – Dan Tencer, Director of Scouting

From Abbotsford, BC, with our 41st overall pick, we have selected defenceman, Jordan Martin.#WHLDraft pic.twitter.com/FpHZf0MbJb

To kick things off in the third round the Blades struck another deal; this time with the Portland Winterhawks to move up a few spots from 66th overall to 62nd, coming at the cost of the 113th overall pick. 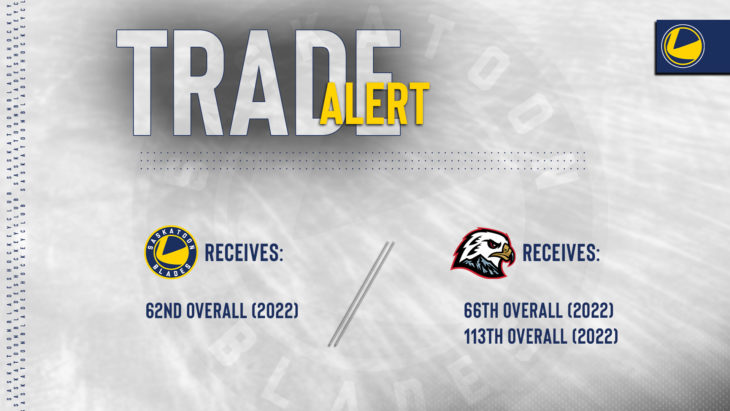 The 62nd overall pick was then used to acquire Lochlan Tetarenko from Bragg Creek, Alberta. If the last name looks familiar, it’s likely because Lochlan’s father is Joey Tetarenko from just up the road in Prince Albert. Joey spent four seasons in the WHL with the Portland Winterhawks where he won a memorial cup before making the jump the NHL. But back to Lochlan. The 5’8″ forward had 26 goals and 50 points this season in 26 games as a member of the Okotoks Oilers of the Alberta U15 AAA League. Lochlan is a dual citizen with a birthplace of Houston, Texas, and is one of the younger players in the Blades draft class, not celebrating his 15th birthday until August.

“Lochlan is going to be a lot of fun to watch in a couple of years as his physical maturity takes place. He’s a super competitive player who brings a real heartbeat to his play on the ice and his energy level with teammates off the ice. He’ll beat you physically and he’ll beat you with his ability to finish, we think he’s a prototypical scoring power forward in the making.” – Dan Tencer, Director of Scouting 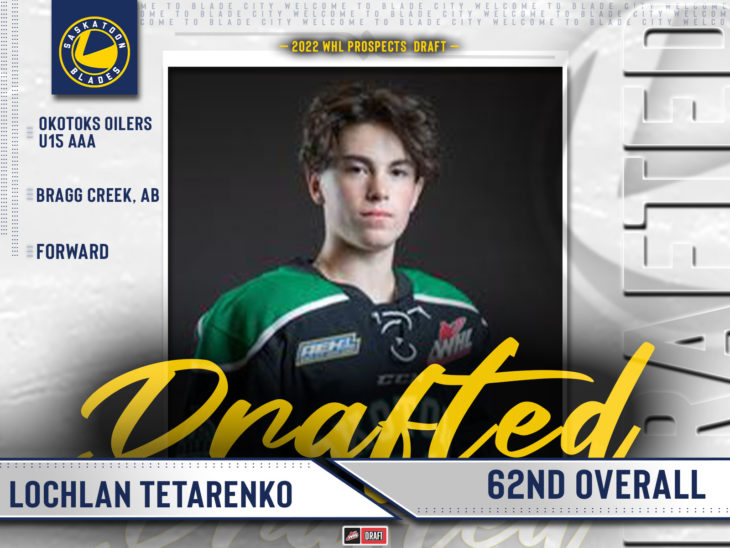 On to the fourth round, the Blades selected Brayden Klimpke from the Northern Alberta Xtreme program. A left-shooting defensemen, Klimpke had 17 assists in 29 games this season. Klimpke, a native of Calgary, stands at 5’5″ and is also a late birthday turning 15 in October.

“Brayden is one of the most intelligent players I’ve seen in my years of doing this. His ability to process the game at speed is truly elite. His reads are effortless and his ability to be elusive with his footwork and make transition plays up the ice gives him immense ceiling. We believe there’s a lot of physical maturity left in him, also, and think that with his intelligence, skill and footwork he’s going to develop into a truly elite player for us.” – Dan Tencer, Director of Scouting

With our 70th overall pick, we have chosen defencemen, Brayden Klimpke#WHLDraft pic.twitter.com/GSa75AiCkl

Saskatoon only sat back for one pick as they were right back on the clock after swinging a deal with the Prince George Cougars. The Blades sent 2002-born forward Noah Boyko to Prince George in exchange for the 72nd overall pick. The pick then used to take Maxx Hamelin. 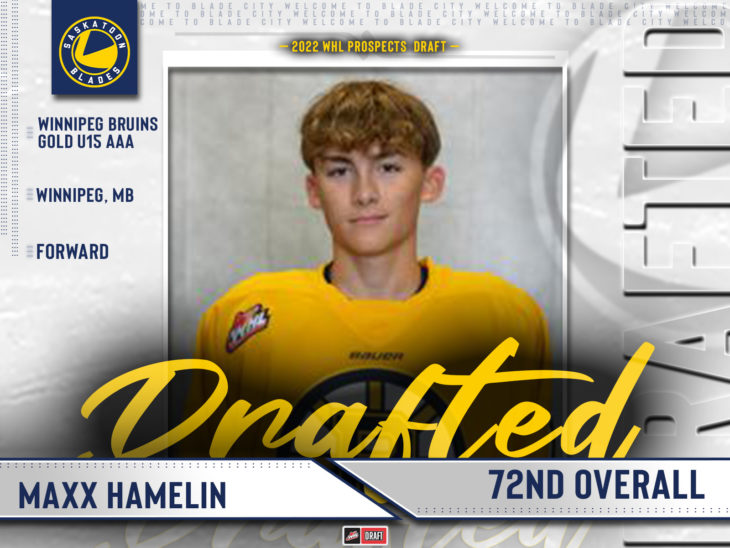 Max Hamelin, a forward from Winnipeg, had a monster year with his hometown Bruins squad. The 5’7″ centre piled up 48 goals and 44 assists in just 32 outings. 11 of those goals came on the man advantage, two were scored short-handed, and Max also received 48 minutes worth of punishment.

“Maxx had a fantastic regular season and an even better playoffs in Manitoba. We see a player that has the skill and compete level to show up at big times in big games and really produce at our level. He plays with great pace and with high end offensive intelligence and skill and think his offensive ability is a great complement to the group of players we drafted in December and today.” – Dan Tencer, Director of Scouting

The Blades sat idle in the fifth round and then stayed close to home for their next pair of selections.

From Saskatoon, SK, with our 129th overall pick, we have selected forward, Rylan Hue 👏#WHLDraft pic.twitter.com/k1qe3NftwO

Saskatoon’s own Rylan Hue was taken next in the sixth round. A 5’10” centre from the Saskatoon Bandits program scored at goal-per-game pace this season with 31 goals, 18 assists, and 52 penalty minutes in 31 bouts.

“Rylan is a local player who you could count on to score every time you went to watch him. He’s got good size, is an elite shooter and quite simply was able to show up when it mattered all throughout the year. He has a strong willingness about him and has the ability to change the game for his team.” – Dan Tencer, Director of Scouting

Another pick from Saskatoon, SK! With our 137th overall pick, we have selected Dayton Deschamps#WHLDraft pic.twitter.com/t5j4FQcefP

Eight picks later the Blades took another hometown product with Dayton Deschamps. A defenseman standing at 5’7″, from Saskatoon, SK played his 2021-22 season with the Saskatoon Outlaws U15 AA. In 30 games, the left-shot defender scored nine goals and 22 assists.

“Dayton is a local defenceman who is a very, very strong defender that we think possesses the ability to impact the game offensively as he grows. He plays far bigger than he is and his details on the ice are excellent. An intelligent, competitive player who has a lot of ceiling left to come as he develops into an exciting 2 way defender.”– Dan Tencer, Director of Scouting

For the final pick in the 7th round, the Blades selected Tyler Deakos of Cochane, AB. The right-winger showed his worth this past season with the Edge School U15 prep putting up eight goals and 10 assists in 18 games, followed by five goals in the post-season.

“Tyler really elevated his game in the 2nd half of the season and into the playoffs and plays with real pace and heart. He was impactful for his team in key moments, bringing his speed to the forefront to create problems for the opposition. He kept making improvements all season long and I think the skill level and pace here are just starting to show signs of the upside that will be there long term.” – Dan Tencer, Director of Scouting 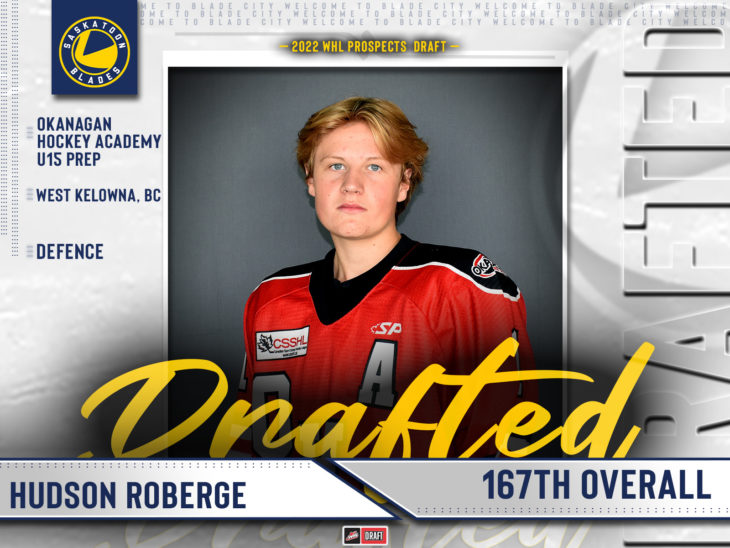 Adding some height to the list, 6’4″ Hudson Roberge was the fifth and final defenceman selected by the Blades in this year’s draft. The British Columbia product earned himself two goals and eight assists, along with 12 penalty minutes, in 10 games with the Okanagan Hockey Academy U15 Prep.

“Hudson had a really tough year on the injury front with a couple of significant injuries, and that limited how much teams were able to see him. This is a young man with elite size and an immense drive to improve as a player. He has a high level of intelligence that will allow him to be a very impactful player as he grows into his body and rounds his game into form. We love the upside here.” – Dan Tencer, Director of Scouting 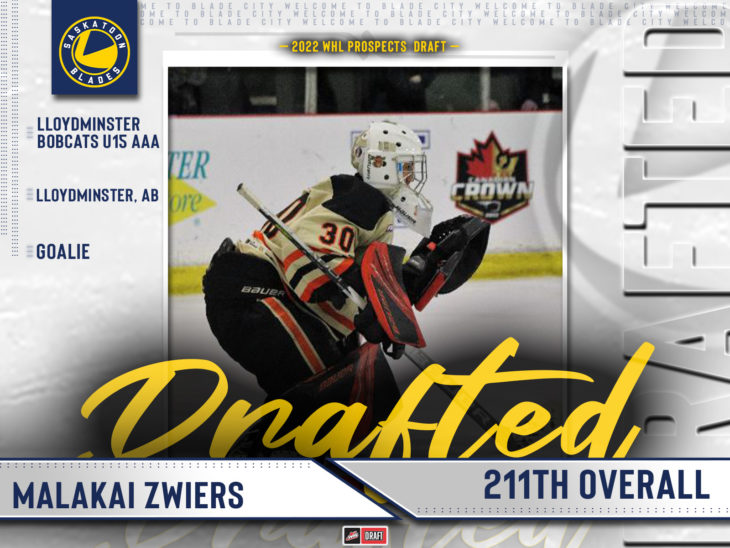 From Lloydminster, AB, Saskatoon selected their first goaltender, Malakai Zwiers. Zwiers played 20 games with the Lloydminster Bobcats U15 AAA, earning 10 wins and eight losses.  The 6’1″ netminder had a 0.916 save percentage, putting him 1oth overall in the AEHL U15 league.

“Malakai is an excellent goalie and a fantastic teammate. His work ethic is high end, he’s got great size and a late birthday with a long runway to develop further. He impressed me every time I watched him play and our goalie coach, Jeff Harvey, thought the game film on him was extremely encouraging. We felt very fortunate to be able to pick him where we did and we’re excited to watch him grow as a player.”– Dan Tencer, Director of Scouting

With our 233rd overall pick, we have selected forward, Colten Worthington 👏#WHLDraft pic.twitter.com/ycOgpyM15T

The 12th and final pick for the Blades was given in the 11th round to forward, Colten Worthington. Worthington showed his strong skills with the Brandon Wheat Kings U15 AAA this past season, finding the scoresheet on numerous occasions, notching 27 goals and 35 assists in 32 games. The left-shot forward was selected 233rd overall.

“Colten is a versatile player with a nice combination of size, skill level, and physical compete. I think he can play the game any way you want and finds a way to make an impact in a variety of ways. I was always impressed by his ability to get to the inside of the ice when it mattered, make plays under pressure and win his battles. He’s got a real chance to be a complete 2 way player as he continues to develop.” – Dan Tencer, Director of Scouting