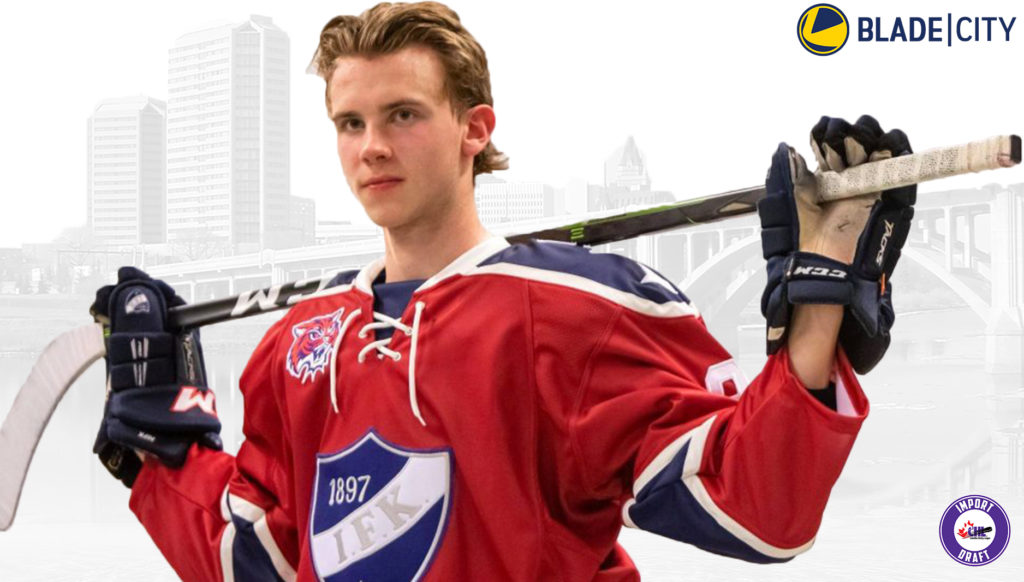 SASKATOON, SK — Brad Lambert could be returning to a familiar place.

With the 33rd overall selection in the 2020 CHL Import Draft, the Saskatoon Blades selected the 16-year-old Finnish product in the first round, forming a gateway back to a city he once played.

Lambert was born in Lahti, Finland, but laced up for the Saskatoon Generals U15 program for one season before returning to his native country for the start of the 2016-17 campaign.

“We were in a unique situation with this year’s draft because we have two returning European players in Martin Fasko-Rudas and Radek Kucerik who are a big part of our team,” said Colin Priestner, GM of the Blades. “We felt using the bonus pick we were afforded, because Fasko-Rudas is a 20-year-old, gave us the chance to swing for the fences and Brad would represent a grand slam home run should we get the opportunity to recruit him.”

The Lambert name also has a familiar ring to the Blades organization. Brad’s father, Ross, wore the Pacman logo for one star-studded season, piling up 106 points in 71 games in 1982-83. Blades fans may also recognize the name Lane Lambert — Brad’s uncle — who played two seasons for the Blades in the early ’80s collecting 233 points.

Lambert is one of the most talked-about prospects eligible for the 2022 NHL Entry Draft, with the potential to go first overall. Playing for HIFK Helsinki-U20 in Finland last season, the speedy centerman scored 18 goals and added 20 assists for 38 points in 42 games. This, despite playing against opponents several years older and more experienced. 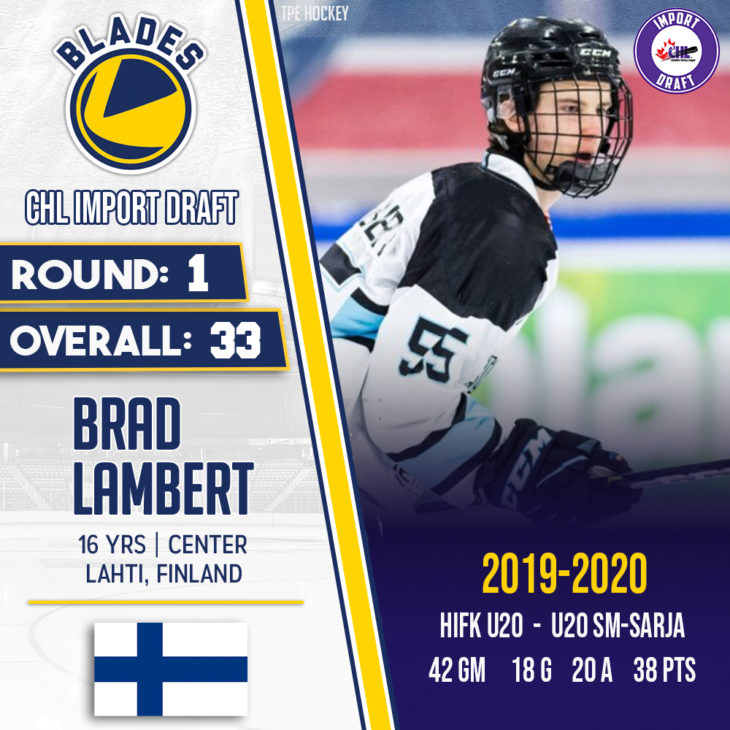 The product of Lahti, Finland has also gained praise on the international stage, wearing Finnish colours at the 2019 Hlinka Gretzky Cup and 2019 World Under-17 Hockey Challenge. At the Hlinka-Gretzky Cup, Lambert notched three goals in five games, and later increased his output with one goal and five assists for six points at the World U17’s.

“He is one of the best 2003-born players in the world and we feel we are a great option for him to develop his game under coach Mitch Love, but we understand that he is committed to his men’s team in Finland and our hope is to get the chance to sell him on the program we have and what playing for the Blades could do for him,” continued Priestner. “We felt, of the 60 teams in the CHL, we had the most unique relationship with him given his family history with Saskatoon and the Blades and we look forward to speaking with him and his family this summer.”

Lambert is currently under contract professionally with JYP in Finland’s Liiga for the upcoming season.

Brad also has a cousin with roots in Saskatoon. Jimmy Lambert, who just finished his second season at the University of Michigan, played three seasons for the Saskatoon Contacts U18 AAA squad before venturing into the BCHL.

This is only the second time the Blades have selected a Finnish-born player in the CHL Import Draft this millennium. Lambert follows Jyri Niemi, who was picked 13th overall in 2007.

The Saskatoon Blades would like to welcome Brad and his family back to Blade City, and look forward to helping him progress his hockey career further in the future.

For the complete results of this year’s CHL Import Draft, click here.