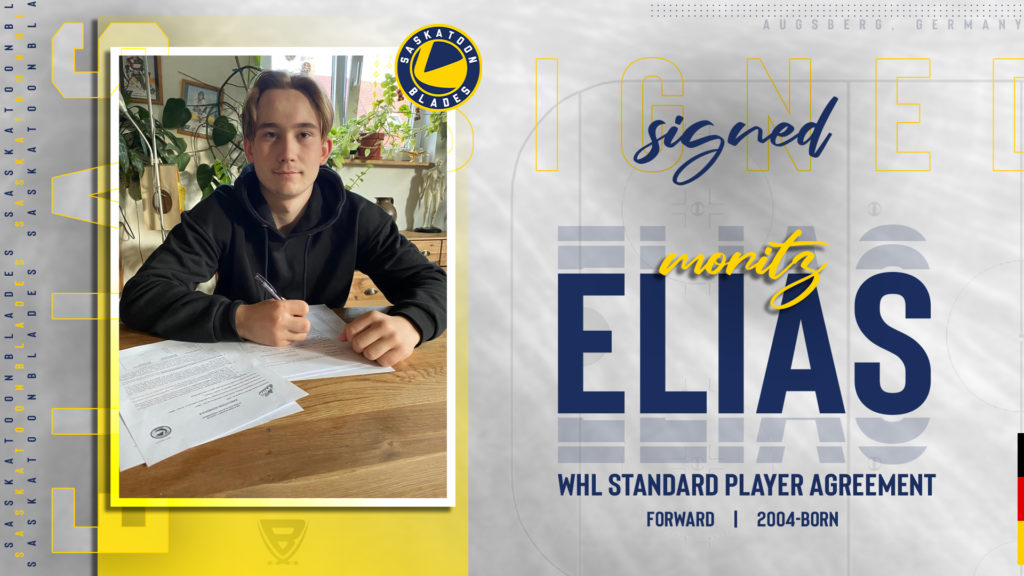 SASKATOON, SK — The Saskatoon Blades are pleased to announce the signing of European forward Moritz Elias to a WHL Standard Player Agreement. The 2004-born centreman from Germany was selected 107th overall in the 2021 CHL Import Draft, and is expected to join the team prior to the start of the 2021-22 WHL regular season.

“Moritz is a highly skilled forward who is widely considered to be one of the very best young hockey players in Germany,” said Blades GM Colin Priestner. “Although he’s small in stature, he brings a big-league presence to the ice regardless of where he plays, and we believe he’ll have a strong chance to be drafted into the NHL after this season.”

The 5-foot-7, 161-pound forward was a key factor for his Team Germany U18 at the 2021 Hlinka Gretzky Cup earlier this month. Elias represented his home country extremely well, finished second in team scoring with one goal and one assist, and leading a young squad to a 7th place finish.

In a COVID-rendered 2020-21 regular season, Elias was loaned to the Nurnberg Ice Tigers of the DEL — Germany’s top professional league — where he tallied two points (1G-1A) in 16 games. He is currently training and skating with Adler Mannheim of the DEL prior to his departure to Saskatoon in the coming weeks.

“He is the third youngest player to ever score in the DEL,” continued Priestner. “The fact he was even playing in that league as a 16-year-old shows he has very high hockey IQ and elite skill. We’re excited to welcome him and his family to the Blades and for trusting us to help assist him in taking the next steps.”

17-year-old Elias is the second selection from the 2021 CHL Import Draft to sign with the Blades, following 1st round pick Yegor Sidorov of Belarus. Elias is eligible to arrive in Canada and join the Blades on September 20th.

Born and raised in Augsburg, Elias is the first German-born player to be selected by the Blades since the CHL Import Draft was introduced in 1992. He is eligible to be selected in the 2022 NHL Entry Draft.

Saskatoon still retains the rights to 2020 import pick Brad Lambert who has already started his season with JYP of the Finnish Liiga.

The Saskatoon Blades are excited to welcome Moritz to the organization and the community, and look forward to continuing his development under the guidance of Brennan Sonne’s coaching staff.