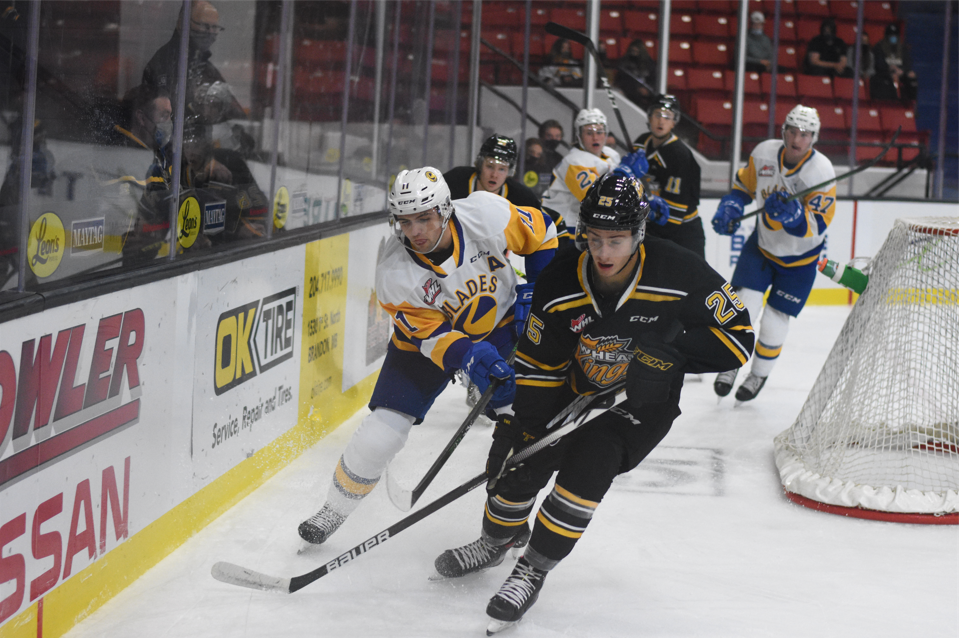 Alternate captain Crnkovic picked up two goals and an assist to earn the game’s first star. Robins collected three primary assists and Rhinehart scored a goal and added a pair of helpers. 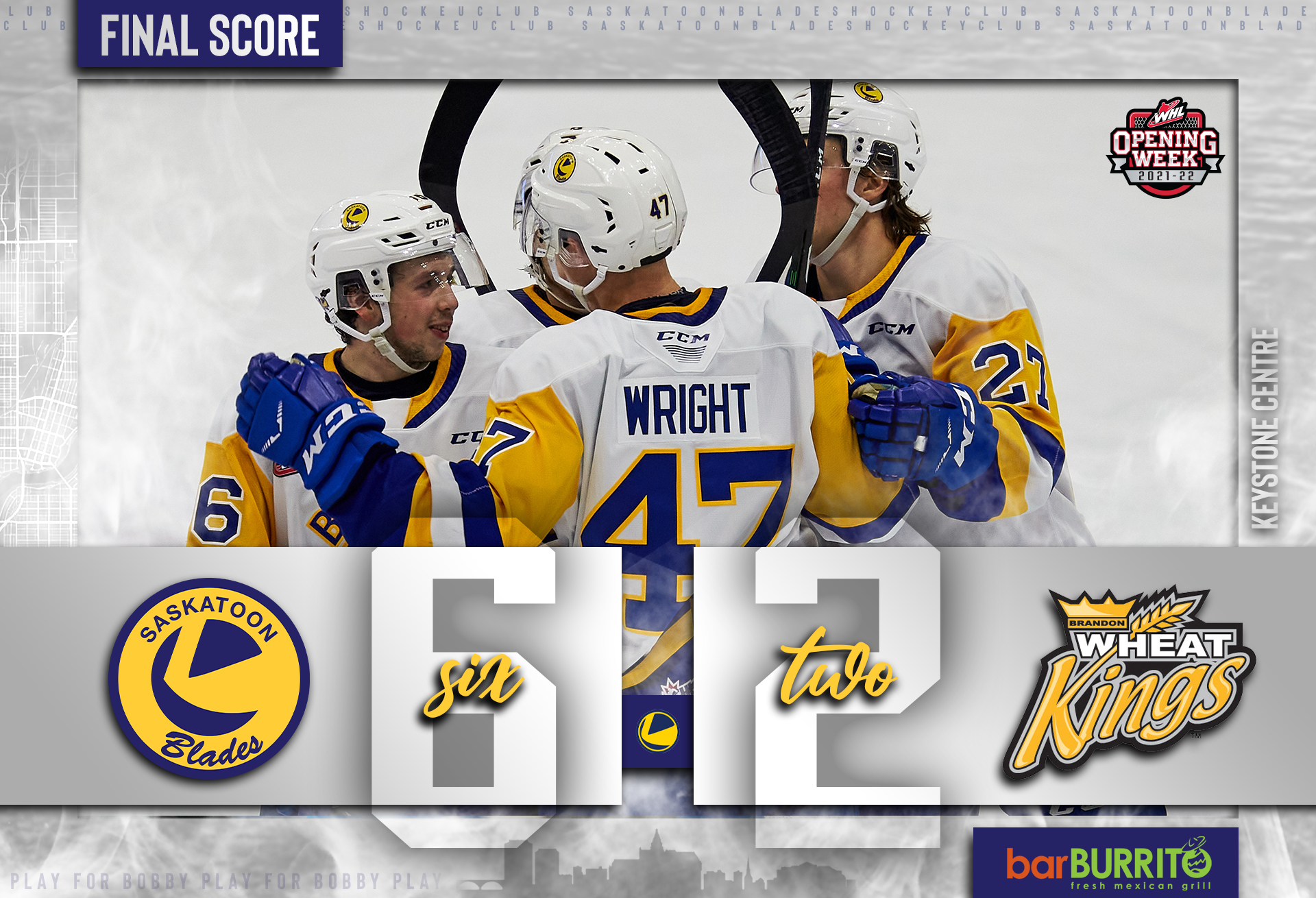 Brandon, who was coming off their first win of the season the previous night, falls to 1-3-0-0. The Wheat Kings collected goals from Ridly Greig and Nate Danielson, while Vincent Iorio notched a pair of assists.

Nolan Maier was once again strong between the pipes for the Blades, stopping 31 of 33 shots to earn his third straight victory. Ethan Kruger and Carson Bjarnason split time between the Wheat Kings pipes and made 21 and 19 saves respectively.

Special teams proved clutch for both teams, with the Blades going an impressive 3-for-4 on the man-advantage with one shorthanded goal. Both of Brandon’s markers came over the course of six powerplay opportunities, including a five-minute man-advantage in the second period.

Blades fifth overall selection Tanner Molendyk opened the scoring 4:56 into the game on the powerplay. The McBride, BC product wired a low snapshot past a partially screened Ethan Kruger to collect the first goal of his junior career.

Special teams continued to excel for the Blades just over three minutes later when Robins and Crnkovic generated a 2-on-0 opportunity while killing a penalty. The San Jose Sharks prospect dished a quick pass to Crnkovic who one-touched his second of the season into an empty net.

Robby and Crnk make it look so easy sometimes 🙂 pic.twitter.com/nk657J5IpG

Nate Danielson drew the Wheat Kings to within one with 49 seconds to go in the frame with his first of the season.

Of Maier’s nine saves in the first period, none were finer than his left leg kick on the Wheaties captain. Ridly Greig split the Blades defence before making a quick move to his forehand in tight, but Maier read the play perfectly and kicked away the opportunity.

Nolan Maier with the left-leg stretch to slam the door on a Ridly Greig rush.@BladesHockey | #WHLOpeningWeek pic.twitter.com/hzqB2aYJwD

As to be expected between these two East Division heavyweights, there was no shortage of physicality. Jayden Wiens and Neithan Salame dropped the gloves right as the buzzer sounded to end the first period. Both players traded several punches before wrestling their way to the ice.

Both teams continued their energetic opening 20 minutes into the second period. Brandon Lisowsky’s second of the campaign came 7:26 into the frame after Robins caught him with a lead pass through the neutral zone. Lisowsky went top-shelf over the shoulder of Kruger, regaining the Blades two-goal lead.

Just over a minute later, Wiens accidentally clipped the heal of Kruger which caused the Wheaties goaltender to tumble awkwardly and twist his leg. The Blades forward was handed a five-minute major for interference on a goaltender and was ejected from the game. Kruger left and did not return.

The Wheat Kings clawed to within one with a 5-on-3 powerplay goal courtesy of Greig, who snapped a hard shot from the slot past Maier.

With just over a minute remaining in the second, Crnkovic let a hard snapshot go while on the powerplay to regain the Blades two-goal lead at 4-2.

Saskatoon held a 29-23 shot advantage through 40 minutes to compliment their two-goal lead.

The Blades collected first goals of the season from forward Brendan Lee and alternate captain Rhett Rhinehart. Lee, who was acquired by the Blades via trade in the off-season, snuck a backhand shot under the right arm of Bjarnason, while Rhinehart ripped a hard slap-shot from the point that found a hole.

Saskatoon outshot Brandon 46-33, including a 17-10 margin in the third period.

These two teams don’t have to wait very long to see each other again — they’ll drop the puck at SaskTel Centre on Wednesday at 7:00pm.