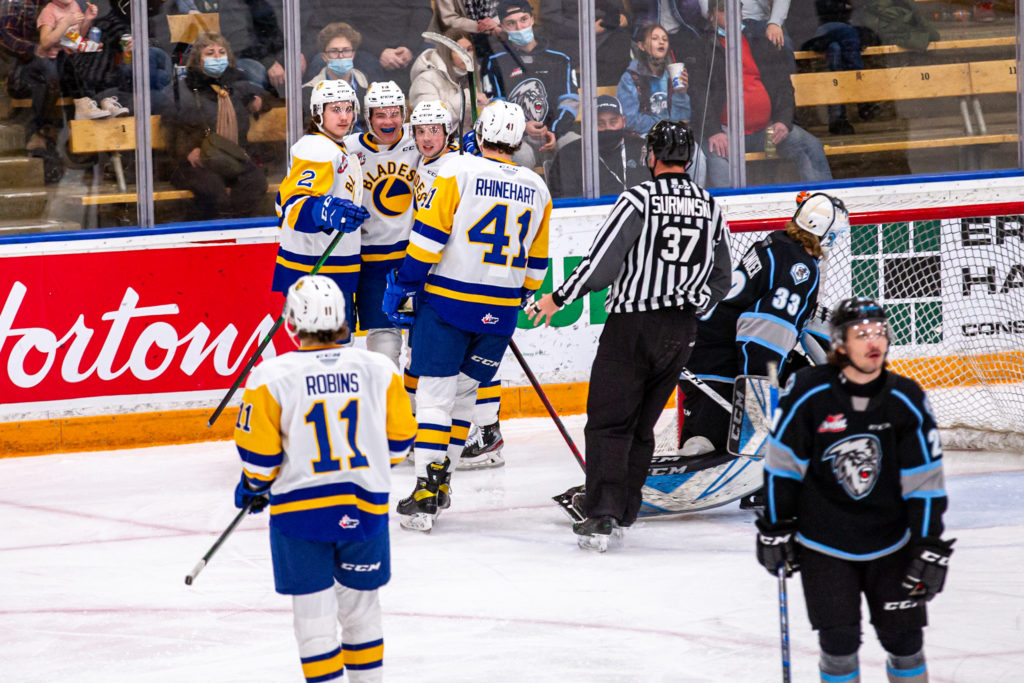 WINNIPEG, MB – The Saskatoon Blades meant business on Saturday, as multiple players found the scoresheet in a dominant 6-2 victory over the Winnipeg ICE at Wayne Fleming Arena.

A total of 11 players recorded points, including rookie Misha Volotovskii who scored his first career goal in WHL.

Blades goaltender Nolan Maier was stellar in net stopping 34 of 36 helping Saskatoon improve to 13-10-1-0 on the campaign. It was a special night for the Yorkton, SK product as well, starting in the pipes for the 177th time in a Blades uniform — a record mark only matched by Stanley Cup champion Braden Holtby.

Nolan Maier was flawless in the first, opening the door for the Blades offence to find the scoresheet first with just over three minutes to go. Crnkovic went bar-down on Alexander— his team-leading 14th of the season and second against Winnipeg in as many nights — after captain Aidan De La Gorgendiere sent him a perfect pass.

Scoring came in waves in the second period, piling up five goals on 12 shots. Brendan Lee took a pass from Rhett Rhinehart and lit the lamp for the fourth time this year.

The Blades struck again less than three minutes later on a Saskatoon 2-on-1 as Rhinehart found Crnkovic for his second of the night and sending Alexander to the bench.

Calgary, AB’s Volotovskii joined the scoring parade less than a minute later, picking up his first in the WHL after a pass from Parr found him all alone in the slot.

That was hardly the end of a dominating second period for Saskatoon. Tristen Robins put the moves on the ICE defenders and had the puck flipped to Lisowsky on the left wing. The draft-eligible forward ripped a slap-shot over the glove of Hauser.

Hungry? How 'bout some top 🧀 pic.twitter.com/rr3FrOsyGC

The ICE would break the shutout mid-way through the third after a shot from Evan Friesen trickled past Maier to cut into the Blades lead, making it 6-1.

Matthew Savoie added another one for the ICE, but the damage was far too great for Winnipeg to overcome. Saskatoon finishes it’s stretch of nine-straight games away from home with a well-earned victory.

Saskatoon will now turn its attention to next Friday, when the Blades pull specially designed jerseys as part of the Superstore Design-A-Jersey Night, in a contest against the Calgary Hitmen.