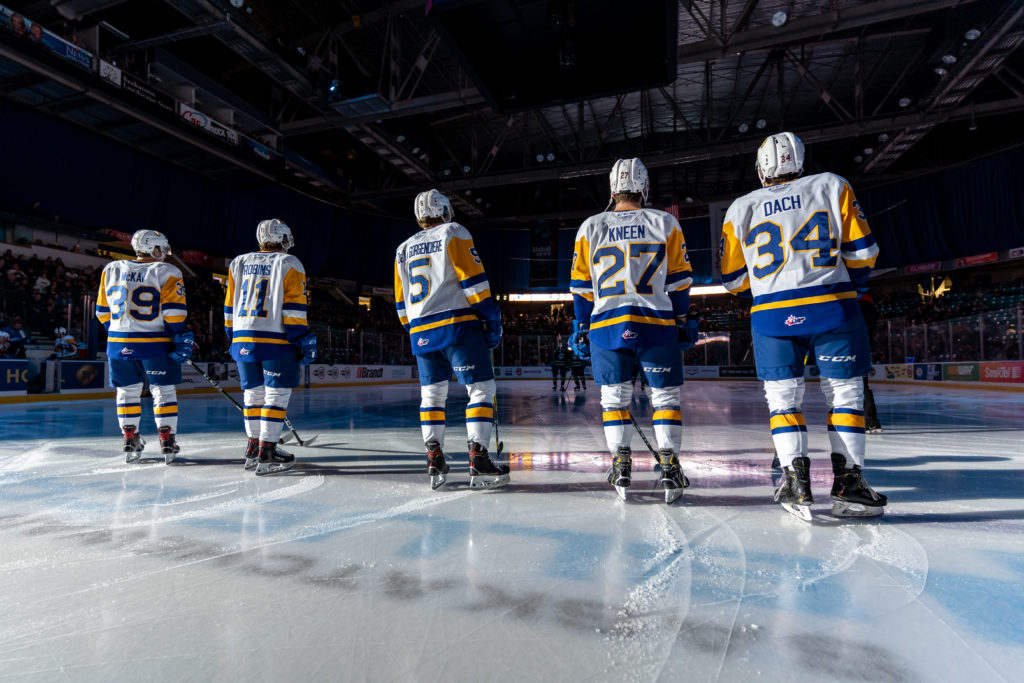 The sudden conclusion of the 2019-20 season due to the COVID-19 pandemic came as a shock to everyone, and it also meant a big change to the way the Saskatoon Blades reveal the winners for its annual individual team awards.

Unfortunately, the Blades were forced to cancel its annual awards banquet — an event that brings players, families, and our most passionate fans together for a special night of celebration and reflection.

But while the team was unable to bring everyone together under one roof, it didn’t stop us from working with our greatest fans to unveil each award winner, one way or another.

Here are the winners of the 2019-20 Individual Team Awards, as presented by those who cheer on the Blue and Gold

Special thanks to Kyla and Nixon Koscielski, who did a tremendous job of unveiling this year's winner! pic.twitter.com/jvWVNM8khU

Next up: the Best Defenceman award.

11-year-old Jaxon Hozack is one of our biggest fans, rarely missing a game, and has the details! pic.twitter.com/xsvzd2DYTl

Moving onto our Defensive Forward award, presented to the player who excels on both ends of the ice.

We asked long-time season ticket holder Wilf Martin to present this award. Thanks Wilf, and hope to see you back at the rink soon! pic.twitter.com/3faxjPF8VO

Rookie of the Year: Colton Dach

Our next award comes thanks to @RFlahertyGlobal of Global Saskatoon.

Ryan is presenting the award for Rookie of the Year… and I think we can all agree on this one 😏 pic.twitter.com/AEHX6VayFW

Up next: the Hardest Hitter award 🤜💥

Our next award is brought to you by long-time season ticket holder and one of our most passionate fans, Brad Hubbard.

He's serving up the Most Gentlemanly award🕺 pic.twitter.com/y3cKCzsxRd

Now for our Most Improved Player award.

Blades Booster Club board member Bailey Urick has the details! Thanks for your help and support, Bailey 🙏 pic.twitter.com/jfCiggVpql

4-year-old Caydence MacLeod, who would live at the rink if she could, presents this year's Best Forward award!

Take it away, Caydence 📹 pic.twitter.com/pKiY0Qlk8T

Next up, we invited two of our most committed fans, Randy and Karen Wapple, to help us with the Bentley Memorial Academic award.

Huge thanks, Randy and Karen, for your unwavering support last season! pic.twitter.com/IiQi6pd0nu

Next up: the Community Minded award.

This year's winner worked closely with @yxeFoodBank & Learning Centre all season. We invited Laurie O'Connor from the Food Bank to make the announcement! pic.twitter.com/nI2UcQCHwQ

Fan of the Year: Ryan Collinge

At this time, we would like to announce and congratulate Ryan Collinge as our Fan of the Year for 2019-20.

Ryan represented #BladeCity in tremendous fashion, showing support at all costs, and bringing a smile to every game. Thank you for your passion, Ryan! pic.twitter.com/z4M5iGASmo

Moving to our Fan's Choice Award for the 2019-20 season, brought to you by the Bryksa Family!

Thank you to all who took part in our online poll 🙏 you might recognize the winner this year…😉 pic.twitter.com/yEpl0XIuC0

We called upon the one and only @Bladesvoice to deliver our most prestigious award… pic.twitter.com/CmCwZX6HbP