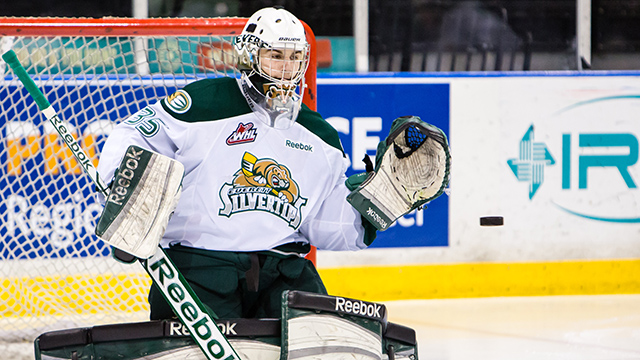 Nikita Scherbak, Troy Trombley out; Nik Amundrud, first and second round picks in

SASKATOON – The Saskatoon Blades announced a blockbuster trade today, dealing forward Nikita Scherbak to the Everett Silvertips in exchange for ’97-born goaltender Nik Amundrud from Melfort, SK, a first round selection in the 2015 Western Hockey League Bantam Draft, and a second round pick in the 2016 draft.

The arrival of Amundrud paved the way for the release of 20-year-old netminder Troy Trombley.

“We certainly thank Nikita for all he did for us,” General Manager and Head Coach Bob Wood said, “but the excellent play of our two new Europeans, Swedish defenceman Amil Krupic and Russian winger Nikita Soshnin, forced us to seriously consider other teams’ proposals. League rules prevent us from trading the Euros we just drafted so we would have to outright release one of them to get down to two imports if we were going to keep Scherbak. The only option we had in terms of realizing any kind of return was trading him.”

Scherbak, a first round pick (26th overall) of the Montreal Canadiens, is still away at the club’s training camp. He is also expected to miss WHL games this season due to his participation in the 2014 Subway Super Series and the 2015 IIHF World Junior Championship.

“The immediate help in net in the form of a high-end like goalie Nik Amundrud, plus first and second round draft picks, is a trade that was too good to pass up,” adds Managing Partner Colin Priestner. “Getting a 1997 goalie is a key piece in our rebuild, as is having Nikita Soshnin for potentially four more years.

“We now possess two first round picks in the upcoming draft, which we feel positions us extremely well in our path to building a championship team.”

Added Woods: “We scouted Nik in a pre-season tournament and he is a big, technically sound goalie. He is going to have every opportunity to play a lot of games here in Saskatoon.”

Amundrud was the top goalie in the pre-season, leading the WHL with a 0.51 goals-against average and a .981 save percentage, allowing only one goal in four appearances.

The 6-foot-1, 165-pound netminder spent most of the 2013-14 campaign with the North East Midget AA team in Saskatchewan’s Centre Four Hockey League, registering a 9-2-1 record and a 2.81 goals-against average in 14 games played.

Amundrud was originally drafted by the Silvertips in the third round – 59th overall – in 2012.

Scherbak, 18, led the Blades in scoring last season and was tops among WHL rookies, recording 28 goals and 50 assists for 78 points in 65 games. The product of Moscow, Russia, was drafted in the second round – 109th overall – by the Blades in the 2013 CHL Import Draft.

The Blades thank  Nikita Scherbak and Troy Trombley for their contributions to the organization and the city of Saskatoon. 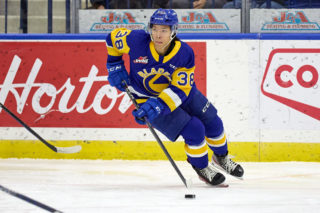 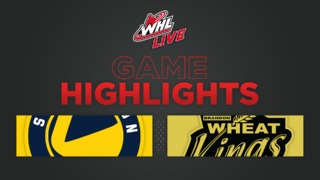 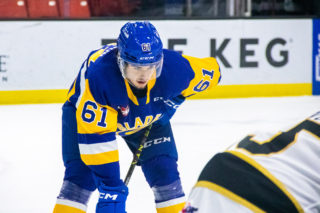 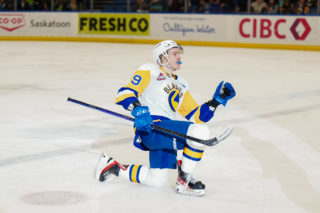