Saskatoon, SK – The Saskatoon Blades were looking sharp on Saturday night hosting the Brandon Wheat Kings for Don Cherry Night. However, the fun was spoiled by the visiting Wheaties who handed the Blades a 4-2 loss, pushing Saskatoon to the brink of elimination from the playoff race.

In an otherwise scoreless opening to the game, the Wheaties took a 1-0 lead with 46 seconds left in the first period as Stelio Mattheos cut into the slot from right wing and scored through Nolan Maier’s five-hole at close-range.

Brandon doubled down on their lead at 10:22 of the second period, taking advantage of a two on one opportunity. Linden McCorrister came streaming in with a passing option but opted to fake the pass and with a smooth release bested Maier effortlessly glove side: 2-0 visitors.

Michael Farren finally got the Blades on the board in the second period, scoring at 7:09. He was set up on the left wing by Mark Rubinchik and classily sniped in his 10th goal of the season past a screen.

Farren's 10th cuts the lead in half!!

Unfortunately, Brandon answered right back, killing Saskatoon’s momentum with a power play and re-taking a two goal lead by scoring at even strength just after Saskatoon’s penalty expired through Luka Burzan. Despite outshooting the Wheat Kings 20-13, the Blades went into the final break trailing 3-1.

Saskatoon’s top line went to work in the third period as Braylon Shmyr chipped the puck ahead to Chase Wouters. The sophomore centre then drove down the right wing taking all the attention of the defenders with him before dishing off to Josh Paterson in the slot for an easy wide-open tally. The goal was Paterson’s 31st of the season and got the Blades within one with over 13 minutes left to play.

Wouters sets up Paterson for his 31st and gets the Blades within one!!

But a late effort with the net empty wasn’t quite enough to solve Brandon’s Dylan Myskiw who made 29 saves and picked up 1st star honours. The Wheat Kings would add an empty net goal to finish the game at 4-2.

Meanwhile in Prince Albert, the Raiders won their 9th straight game to give them a 7 point lead over the Blades with just 4 games remaining on the schedule for each team.

Next up for the Bridge City Bunch is a trip to Brandon on Tuesday to close out the 8-game season series. 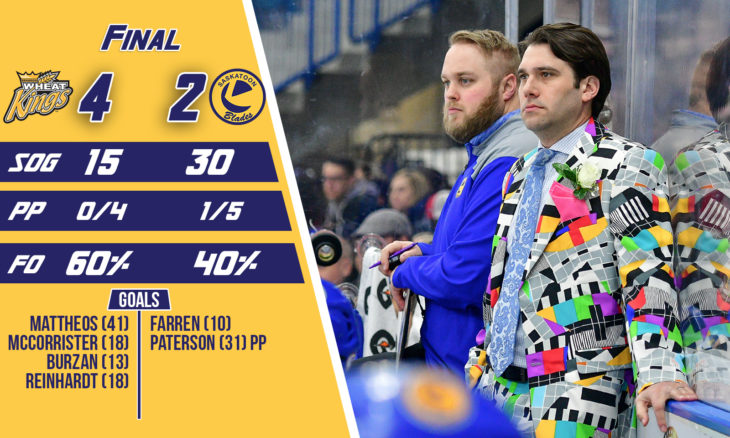