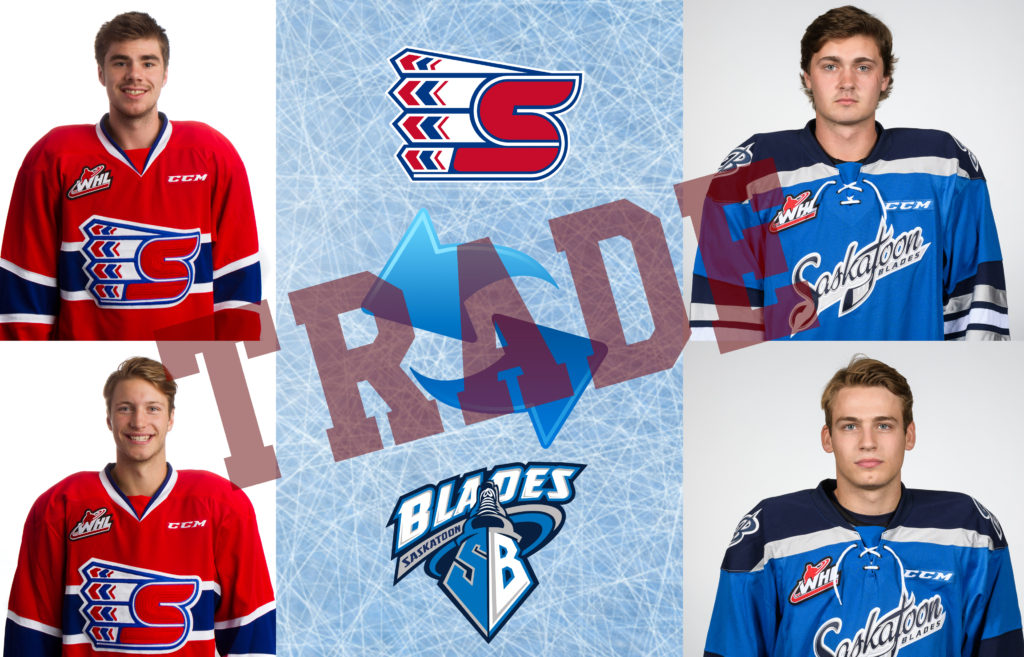 Saskatoon, SK – The Saskatoon Blades have completed a major trade with the Spokane Chiefs today. Saskatoon has acquired ’97 D Evan Fiala and ’96 F Markson Bechtold along with a conditional 6th round draft pick in exchange for ’97 F Wyatt Sloboshan, ’98 D Nolan Reid, and a 2017 3rd round pick.

“This is a significant move for our hockey club. In order to achieve our goals we felt we needed a top-end centre who can play against other team’s best players, and a big, physical defenseman. That’s what we got, and both of these players provide playoff experience and leadership to our group.”

Evan Fiala, who is from Clavet, is a sturdy 6’4″ defenseman who has dressed for all 32 games this season with the Chiefs. Fiala has 2 goals, 7 assists, and 54 penalty minutes this season, to go along with an impressive team leading +12 rating. The former 1st round pick of the Chiefs brings a wealth of experience, having 157 WHL regular season games under his belt. Over his career Evan has collected 40 points, 264 penalty minutes, and a +24 rating.

“Evan brings exceptional leadership skills and he’s a top end defender who plays night in, night out against the oppositions best players,” said Blades General Manager, Colin Priestner. “He plays a tough brand of hockey and he’s definitely going to help us going into the back half of the season, which is always the hardest stretch.”

Markson Bechtold, much like Fiala, brings size, skill, and experience to the Blades roster. Bechtold is a top end centre who is effective on both sides of the puck. The 20 year old Strathmore, Alberta product, has 8 points including 5 goals in just 13 outings this year with Spokane. He recently returned from injury and in his first five games back Bechtold has 3 goals, 1 assist, 9 PIM, and a +4 rating. Last season Bechtold appeared in all 72 games with the Chiefs, posting 48 points, 94 penalty minutes, and a +3 rating. Markson was selected 63rd overall by the Chiefs in 2011, and over the course of his career has played 211 regular season games and 14 playoff contests.

“Markson is a mature player we’ve coveted for a long time,” explained Priestner following the announcement of the trade. “He’s a strong two-way centre and we feel he’ll be able to help us in all situations whether that’s even strength, killing penalties, or the power play.”

“Wyatt and Nolan were great ambassadors for the Blades and it’s tough to send out quality kids like them, but at the end of the day we feel this improves our club. We are thankful for their contributions over the past two and a half years, and wish them all the best moving forward.”

As a result of the trade, the Blades have placed ’96 forward Kolten Olynek on WHL waivers. Priestner also added his thanks to Olynek for his two months of service with the team after being claimed off waivers in October from the Prince Albert Raiders.

“Kolten came in and did everything we could have asked of him and more. He’s a great teammate and we sincerely thank him for his work with us.”

Both Fiala and Bechtold are expected to join the Blades in Brandon on Friday against the Wheat Kings. The new Blades will then make their hometown debut on Saturday to finish off the back half of a home and home with the Wheat Kings, and the first half of the season.