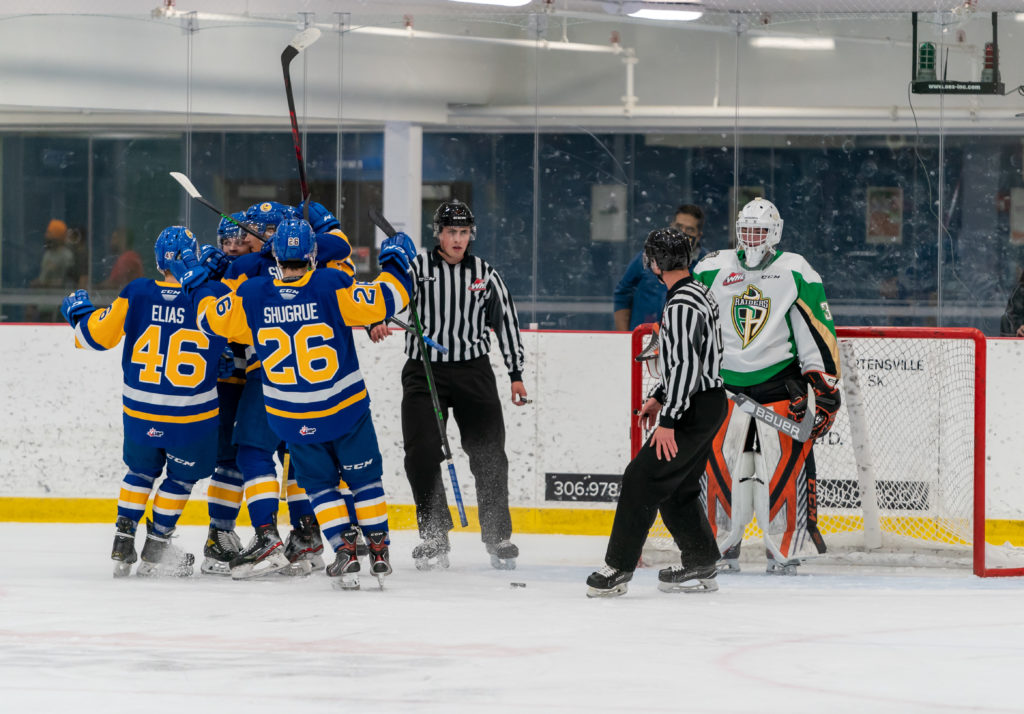 WARMAN, SK — It was a night of firsts for the Saskatoon Blades.

Moritz Elias notched his first WHL goal, Ethan Chadwick earned his first WHL shutout, and the Blades knocked off the Prince Albert Raiders 2-0 in Warman to close out preseason play on Saturday.

Max Hildebrand was calm and cool in the P.A. crease with 25 saves, taking the game’s 2nd star.

Saskatoon closes out preseason play with a 3-1-0-0 record, including back-to-back victories over their closest rival. This win comes one night after the crew scored four unanswered goals to defeat the Raiders 4-2 at the Art Hauser Centre.

In front of nearly 1000 fans packing into The Legends Centre, Wiens gave the home crowd reason to cheer just 3:55 in. The speedy centreman took advantage of a weak clearing attempt by the Raiders and he made easy work for his first of the pre-season, giving the Blades a 1-0 lead.

Carrying on from the previous night, tempers flared early and often. Ben Saunderson was pinned into the end boards from behind by Bryce Warkentine, resulting in several players tying up one another. Moments later, Brandon Lisowsky was handed a boarding penalty for a similar play. Both teams routinely traded slashes, punches, and elbows at various points in the game.

Playing in his first Western Hockey League game, Yegor Sidorov made a name for himself. Known as a quick stick-handling goal-scorer, the Blades import pick dropped the gloves against Tayem Gislason early in the second, but the fight lasted mere seconds before the linesmen stepped in. Sidorov arrived in Saskatoon just two nights ago, and showed off his speed on several plays up-ice, skating on a line with Elias and Evan Patrician.

Elias found the scoresheet for the first time midway through the third. The German winger found a small hole under the blocker of Hildebrand on the powerplay, and lifted both hands into the air towards the stands in celebration. The goal gave Saskatoon enough breathing room to skate to victory unscathed.

With just over one minute left, Pasha Bocharov came to Brendan Lee’s defence after Lee was caught with a suspicious hit in the attacking end by Ethan Ironside. Bocharov immediately ejected his gloves and began throwing punches after pinning Ironside to the ice. Both players were handed fighting majors with Ironside handed two extra minors.

Saskatoon’s attention now turns to next weekend’s home-and-home against the Moose Jaw Warriors — ringing the opening bell on the 2021-22 regular season. The Blue & Gold crack into the campaign on Friday in Moose Jaw, before rolling out the red carpet for their home opener on Saturday.