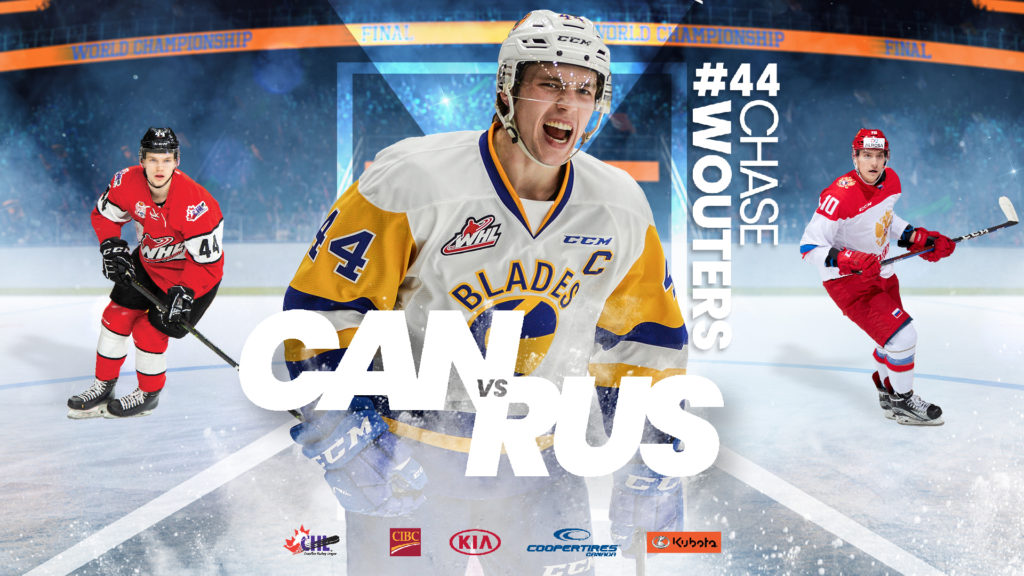 The Saskatoon Blades are proud to announce that Blades’ Captain & forward Chase Wouters has been added by the Western Hockey League, in collaboration with the Canadian Hockey League and Hockey Canada, to Team WHL’s roster ahead of its games against Team Russia at the 2019 CIBC Canada Russia Series on November 13th and 14th in Saskatoon and Prince Albert.

With a strong start to the 2019-20 season, Wouters currently sits second in scoring with the Blades, posting 17 points (10G-7A) in 18 games. As of Tuesday, November 5th, he is also tied for 5th in goal scoring across the entire WHL and ranks 1st in face-offs won with 249.

For his WHL career, the 6-foot-0, 185-pound product of Lloydminster, Alta. has 128 points (49G-79A) in 214 WHL regular season games. In 2018, Wouters was named the WHL Eastern Conference Scholastic Player of the Year. Internationally, the 19-year-old Wouters earned silver with Canada Black at the 2016 World Under-17 Hockey Challenge and represented Canada at the 2018 IIHF Under-18 World Championship. The Blades chose Wouters with the 19th-overall selection in the 2015 WHL Bantam Draft.

In addition, the WHL announced that forwards Kirby Dach of the Saskatoon Blades and Peyton Krebs of the Winnipeg ICE will not participate at the event, while Edmonton Oil Kings’ forward Josh Williams has also been added to Team WHL’s roster alongside Wouters.

The 2019 CIBC Canada Russia Series will represent the event’s return to both Saskatoon and Prince Albert. In 2005 and 2014, the event made an appearance in Saskatoon, while Prince Albert played host in 2008.

The 2019 CIBC Canada Russia Series is supported by title sponsor CIBC, the Official Bank of the CHL, along with associate sponsors Kia Canada, Cooper Tires, and Kubota Canada. All games will be broadcast nationally on Sportsnet and TVA Sports.

Tickets for Games 5 of the 2019 CIBC Canada Russia Series are available now. Complete ticketing options available at the links below.