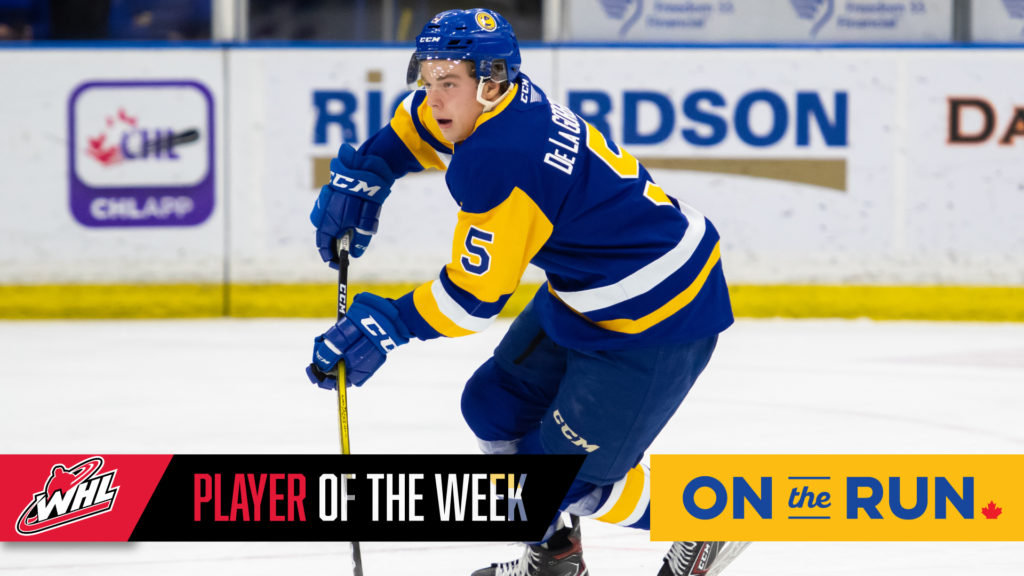 Calgary, Alta. – The Western Hockey League announced today that Saskatoon Blades defenceman Aidan De La Gorgendiere has been named the WHL On the Run Player of the Week for the week ending February 23, 2020.

De La Gorgendiere recorded six points (1G-5A) and a plus-six rating in two games as the Blades recorded a pair of victories over the weekend. The pair of wins have elevated the Blades’ record to 30-22-2-3 through 57 games, putting them on the cusp of clinching a spot in the 2020 WHL Playoffs.

In Friday’s 6-3 road win against the Regina Pats, De La Gorgendiere recorded a goal and an assist. The defenceman assisted on their fifth goal and then scored their sixth goal to help preserve the victory.

De La Gorgendiere celebrated his 18th birthday Saturday with the first four-point game of his WHL career, posting four assists in an 8-1 victory against the Swift Current Broncos. The 6-foot-0, 184-pound product of Langley, B.C. assisted on the game-winning goal midway through the first period before adding helpers on their third, sixth, and eighth goals. He was named the first star of the game and the third star of the night in the WHL for his performance.

Up next for the Blades is a home date at the SaskTel Centre on Friday, February 28 (7 p.m. CT) against the Prince Albert Raiders.

About the Western Hockey League
Regarded as the world’s finest development league for junior hockey players, the Western Hockey League (WHL) head office is based in Calgary, Alberta. The WHL consists of 22 member Clubs with 17 located in Western Canada and five in the U.S. Pacific Northwest. A member of the Canadian Hockey League, the WHL has been a leading supplier of talent for the National Hockey League for over 50 years. The WHL is also the leading provider of hockey scholarships with over 350 graduates each year receiving WHL Scholarships to pursue a post-secondary education of their choice. Each season, WHL players also form the nucleus of Canada’s National Junior Hockey Team.