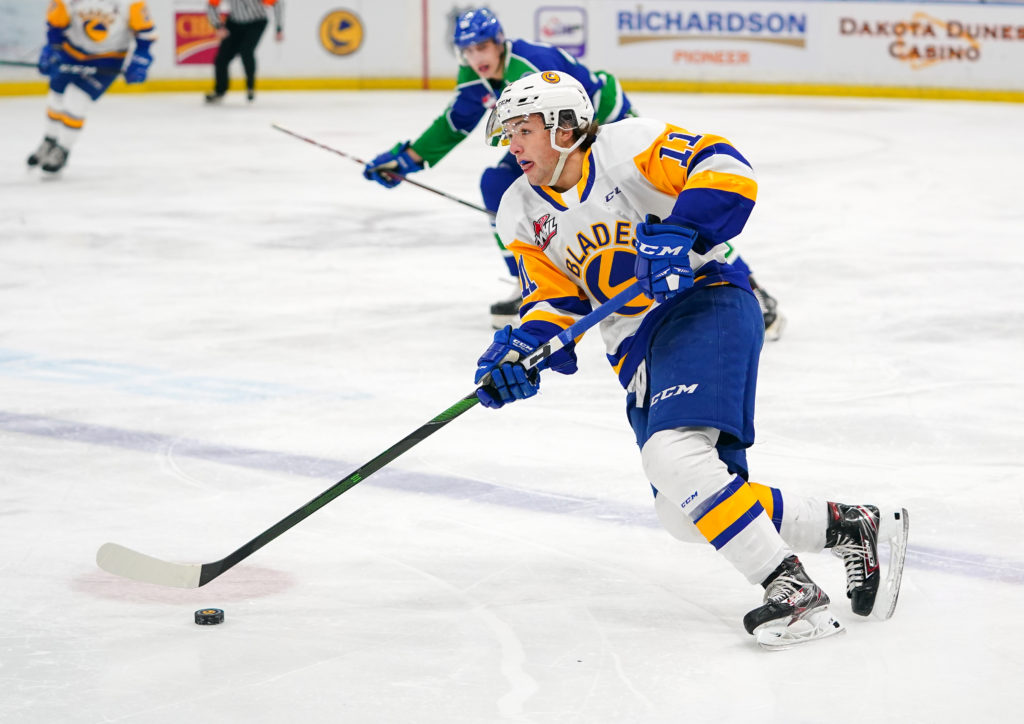 Saskatoon, SK — Five members of the Saskatoon Blades have cracked the end-of-season North American rankings in the NHL’s Central Scouting report. Forwards Tristen Robins and Kyle Crnkovic, along with defencemen Rhett Rhinehart and Aidan De La Gorgendiere, and goaltender Koen MacInnes are all ranked, and are poised to potentially hear their name called at the 2020 NHL Entry Draft this summer.

Tristen Robins exploded offensively in the second half of the campaign, and his ranking improved monumentally as a result. Listed 134th among North American skaters in the mid-term rankings, the speedy centerman ballooned to a final ranking of 86th thanks in large part to his knack for putting the puck in the net. Robins led the Blades in scoring with 33 goals and 40 assists for 73 points in 62 games. Robins won four individual player awards, including MVP, and is the highest-ranked Blades forward in the NHL’s Central Scouting report.

Acquired by the Blades in a deadline deal with the Prince George Cougars, Rhinehart finished the regular season with three goals and 18 points over 57 games. That earned the 6’3″, 203lbs defender a final ranking of 151st. Rhinehart finished 4th in defensive scoring on the Blades, and became a key physical component to the back-end, collecting 44 penalty minutes.

A new addition to the NHL’s Central Scouting rankings, De La Gorgendiere comes in at 197th after piling up 28 points (4G, 24A) in 63 games. This included his first four-point game on February 22nd, all of which assists, in an 8-1 victory over the Swift Current Broncos. Drafted 5th overall by the Blades in 2017, De La Gorgendiere has turned into a reliable, two-way defender, which is now catching the eyes of NHL scouting brass.

Surely considered a dark-horse in the upcoming draft, Crnkovic is coming off a red hot campaign in Blue and Gold. In 63 games, the speedy winger sniped 21 goals and 43 assists, finishing second in team scoring behind Robins. The Chestermere, AB product more than doubled his offensive output from the previous season. Crnkovic also saved his best for last with seven goals, two of which overtime winners, and 14 points in the final 10 games.

Freshman goaltender Koen MacInnes is coming off a strong performance in his back-up role to starter Nolan Maier, which greatly escalated his final scouting ranking. The Burnaby, BC native shot up nine spots to 22nd among North American goaltenders after putting together a 14-5-1-0 record. The 6’2″, 184lbs keeper also recorded an impressive three shutouts, and finished the season with a 2.84 GAA and .901 save percentage.