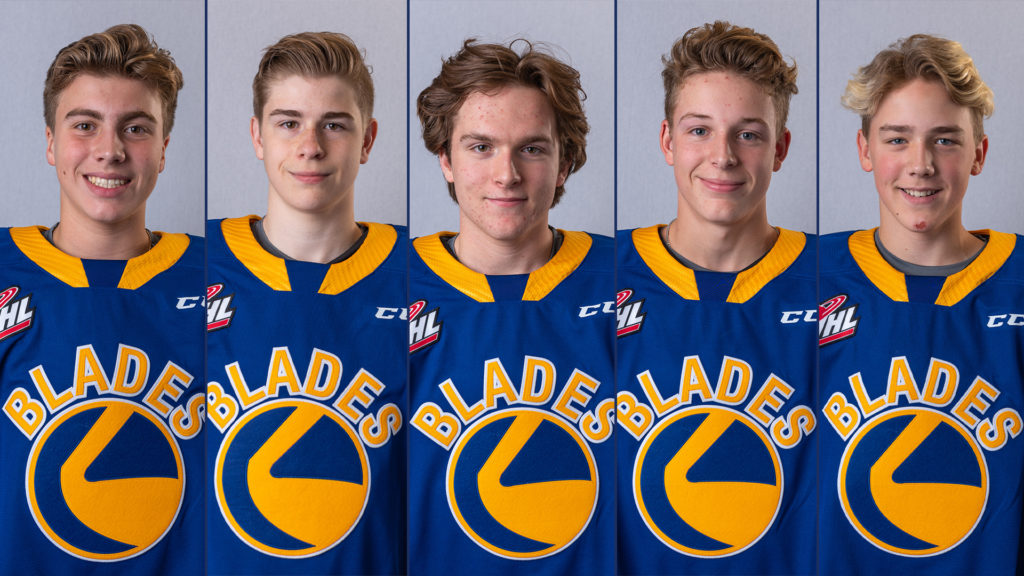 The Saskatoon Blades are proud to announce five prospects have been chosen to represent their province at the 2019 Western Hockey League Cup.

This year’s tournament will pit the top 2004 born hockey players reigning from the provinces of Alberta, British Columbia, Manitoba and Saskatchewan. The majority of the players were selected in the 2019 WHL Bantam Draft, though it is not a requirement to play in the WHL Cup.

Blades’ prospects representing Saskatchewan include a pair of local Saskatoon products. The first is goaltender Ethan Chadwick, who was the Blades’ 3rd round pick at the 2019 WHL Bantam Draft, and Mason Bueckert who was selected in the 9th round.

Chadwick defeated the Prince Albert Raiders in his lone appearance this past Pre-Season, making 39 saves on 42 shots faced. He and Bueckert are both playing in the Saskatchewan Midget AAA League this season, with Bueckert having started his season in hot-form scoring five goals in six games played.

Forwards Brandon Lisowsky and Hayden Smith, the Blades’ 2019 1st and 2nd round selections respectively, will both be suiting up for Team British Columbia. Each enjoyed a successful pre-season with the Blades as Lisowsky notched five points (1G-4A) in fives games played, while Smith tallied two goals in two games played.

Defender Cale Ashcroft of St. Albert, AB, will be the lone Blades’ representative for Team Alberta. Ashcroft was the Blades’ 4th round selection at the 2019 Bantam Draft and is currently playing for the Northern Alberta  Xtreme’s Elite-15 side in the Canadian Sport School Hockey League. This season he has three points (1G-2A) in four games played.

Calgary, Alta. – The Western Hockey League, in partnership with BC Hockey, Hockey Alberta, Saskatchewan Hockey Association, Hockey Manitoba and Hockey Canada, announced today the rosters for the 2019 WHL Cup, which will begin Wednesday, October 23, at the Markin MacPhail Centre in Calgary, Alta.

The WHL Cup features the highest-rated players in the under-16 age category from the provinces of Alberta, British Columbia, Manitoba and Saskatchewan. The tournament will take place from Wednesday, October 23 through Sunday, October 27.

Of the 80 players scheduled to compete, 77 were selected at the 2019 WHL Bantam Draft.

The tournament will be a four-team round-robin format and is the first step in Hockey Canada’s Program of Excellence for players.

About the WHL Cup
The majority of players participating in the event will have been selected in the 2019 WHL Bantam Draft or have since been listed by WHL Clubs. The WHL Cup, formerly known as the Western Canada U16 Challenge Cup, has been sponsored since 2009 by the WHL and has been made possible through financial support provided by the WHL, Hockey Manitoba, BC Hockey, Hockey Alberta, Saskatchewan Hockey Association and Hockey Canada.

About the Western Hockey League
Regarded as the world’s finest development league for junior hockey players, the Western Hockey League (WHL) head office is based in Calgary, Alberta. The WHL consists of 22 member Clubs with 17 located in Western Canada and five in the U.S. Pacific Northwest. A member of the Canadian Hockey League, the WHL has been a leading supplier of talent for the National Hockey League for over 50 years. The WHL is also the leading provider of hockey scholarships with over 350 graduates each year receiving WHL Scholarships to pursue a post-secondary education of their choice. Each season, WHL players also form the nucleus of Canada’s National Junior Hockey Team.