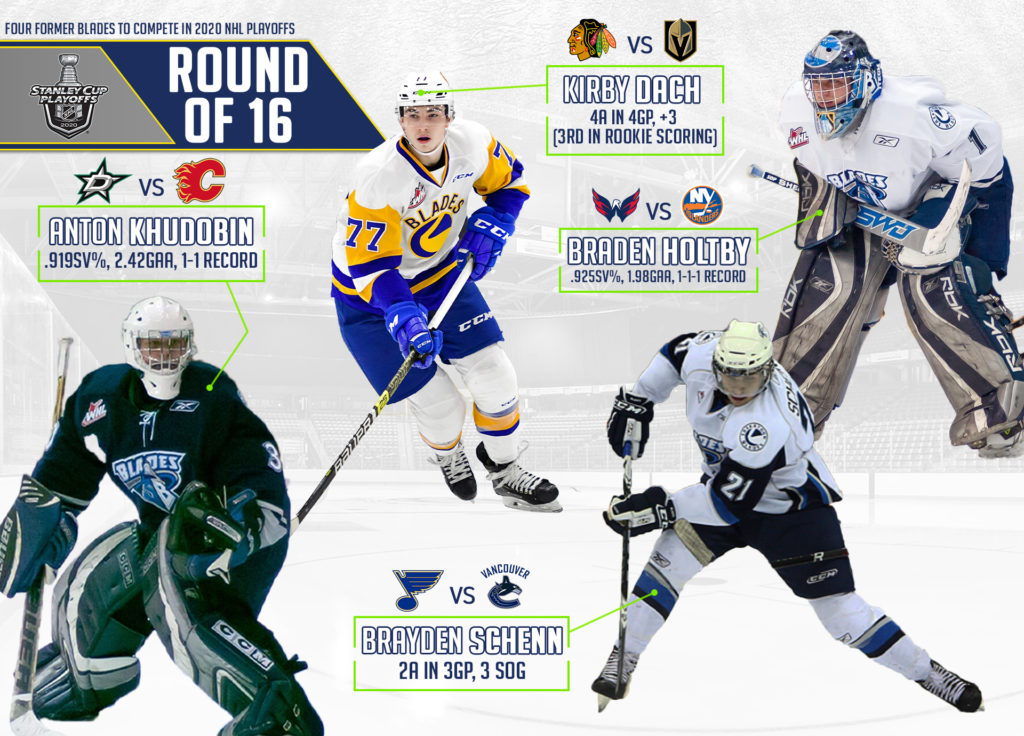 NHL exhibition, play-in, and round-robin matches are officially history, and 16 teams are left fighting for the holy grail of hockey. Among those 16 clubs, are a handful of players who once wore the Pacman logo in Saskatoon.

Let’s take a deeper dive into the four alumni who are set to take the ice in the 2020 Stanley Cup Playoffs.

If you don’t know the name Kirby Dach, where have you been? The budding superstar for the Chicago Blackhawks was uncatchable in their play-in series against Connor McDavid and the Edmonton Oilers. Ousting the Oil in four games, Dach collected four assists, including a pair of helpers in a come-from-behind 4-3 victory in Game 3. That same game, the 19-year-old chalked up the most ice time among forwards at 23:21, topping even that of Jonathon Toews and Patrick Kane. Dach’s long reach, matched with his impressive puck handling and hockey IQ will surely be relied upon in Chicago’s opening-round match-up against the top-seed Vegas Golden Knights.

You don’t get the Washington Capitals without Braden Holtby, and vice versa. The Lloydminster, AB product is a catalyst in the Caps blue-paint, and showed no signs of rust in Washington’s round-robin stint. Although the Caps enter the opening round as the third seed, winning just one of three games, Holtby was a bright light, tabulating a 0.925 save-percentage and 1.98 goals-against-average. He also enters the playoffs coming off his hottest performances — a 2-1 win over the Boston Bruins, stopping 30 of 31 shots. Washington eyes up the New York Islanders in the opening round, who knocked out the Florida Panthers in four games.

Your Player of the Game, presented by @GEICO #ALLCAPS pic.twitter.com/ALMMpy3j9c

No matter the recent history heading into the playoffs, put the moniker ‘defending Stanley Cup champion’ next to a team’s name and they’re immediately a threat. St. Louis enters the opening round as the fourth-seed, going winless in three round-robin games, and are still searching for the magic from last year’s spring fling. Brayden Schenn has yet to find his potential, having only collected two assists in three games to compliment a -2 rating. Once he rekindles his spark from last year’s playoff ride, the Blues could be well on their way to a repeat championship. Schenn collected 12 points (5G-7A) in 26 playoff games to help end the Blues 51-year championship drought, and will begin another march towards Lord Stanley against the Vancouver Canucks in round 1.

It appears ‘Dobby’ may be the Dallas Stars #1 netminder. Anton Khudobin earned the start in the Stars final round-robin game ahead of bonafide number one Ben Bishop, and was nearly unbeatable against the St. Louis Blues. Khudobin gave up one goal on 23 shots in a 2-1 shootout victory, helping Dallas secure the third seed and head into the Round of 16 on winning terms. In two starts, the 34-year-old has a .919 save-percentage and 2.42 goals-against-average — far better numbers than his counter-part Bishop. Don’t be surprised if we see #35 in the crease come Game 1 against the Calgary Flames Tuesday afternoon.