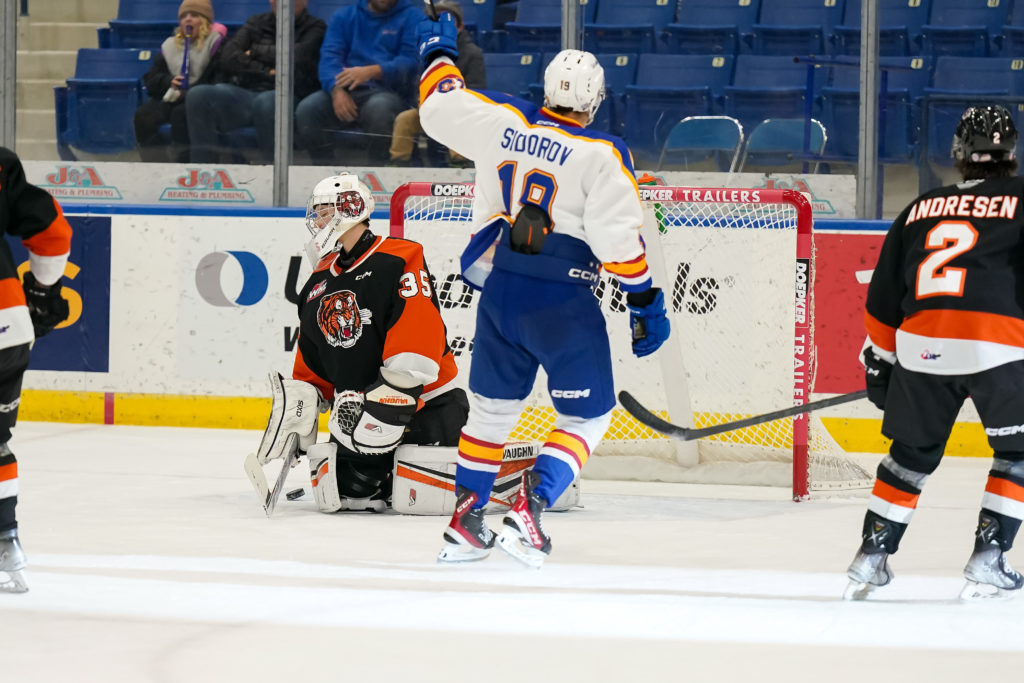 The Blue and Gold beat the Medicine Hat Tigers 4-3 in overtime on Heritage Night, with goals coming from four different Blades. It’s the fourth straight win for the team, improving them to 15-4-0-0 on the season.

Toronto Maple Leafs prospect Brandon Lisowsky notched his ninth goal of the campaign, and tallied an assist to go along with it. He and fellow forward Trevor Wong both extended their point streaks to six games.

Both teams traded chances throughout the first period and early second. The Tigers ultimately struck first, with forward Andrew Basha scoring his sixth of the season to give his team a 1-0 lead.

It took all of 41 seconds for the Blades to respond. Rosetown SK’s Vaughn Watterodt batted the puck down in the slot, before roofing it past Tigers netminder Beckett Langkow. The 18-year-old forward has recorded a goal in his past three games.

Watterodt stops the clearing attempt and sends the puck to the back of the net. pic.twitter.com/H0HcS1E5hQ

Forward Misha Volotovskii kept the good times rolling, fighting for his first of the season on an impressive individual effort. The Blades centre was also effective on the face-off dot, winning 5-of-8 total draws.

Misha Volotovskii's first goal of the season is an absolute beauty 😍 pic.twitter.com/IHtYTAdBl4

Tiger’s forward Brayden Boehm ruined the party, evening the game 2-2 with 2:18 to go in the middle frame.

A roughing call against Medicine Hat’s Dru Krebs late in the period would put the Blades on the man-advantage to start the third.

They didn’t waste the opportunity.

Alternate captain Trevor Wong fed it into the wheelhouse of sniper Brandon Lisowsky, who one-timed a bomb past Langkow for his ninth goal this year. The man known as “Liso” now has four goals and ten points in his last six outings.

Wong tees up Lisowsky and he rips it!

That's his ninth goal of the year 👍 pic.twitter.com/KJ3hAIwYsz

Blades netminder Ethan Chadwick didn’t face a ton of action tonight, but came up with massive stops when called upon. The Warman, SK native stoped 16 of 19 shots against, earning his seventh win on the season. Chadwick rocks a .920 save percentage, and a 2.01 goals against average.

Chadwick comes out and makes the HUGE SAVE! pic.twitter.com/G7nJx8iD2o

Neither team could find the winner in regulation, sending this won to three-on-three overtime.

Just over a minute into the extra frame, Blades sniper Egor Sidorov called game with a wicked shot that blew by Langkow. Sidorov earned first star honours for his performance, and has registered a point in every game he’s played thus far.

The team had some extra swagger to them in the win, sporting their vintage “Bridge” style jerseys. Saskatoon gets a weekend off, before back-to-back games next weekend against the CHL’s top Winnipeg ICE.