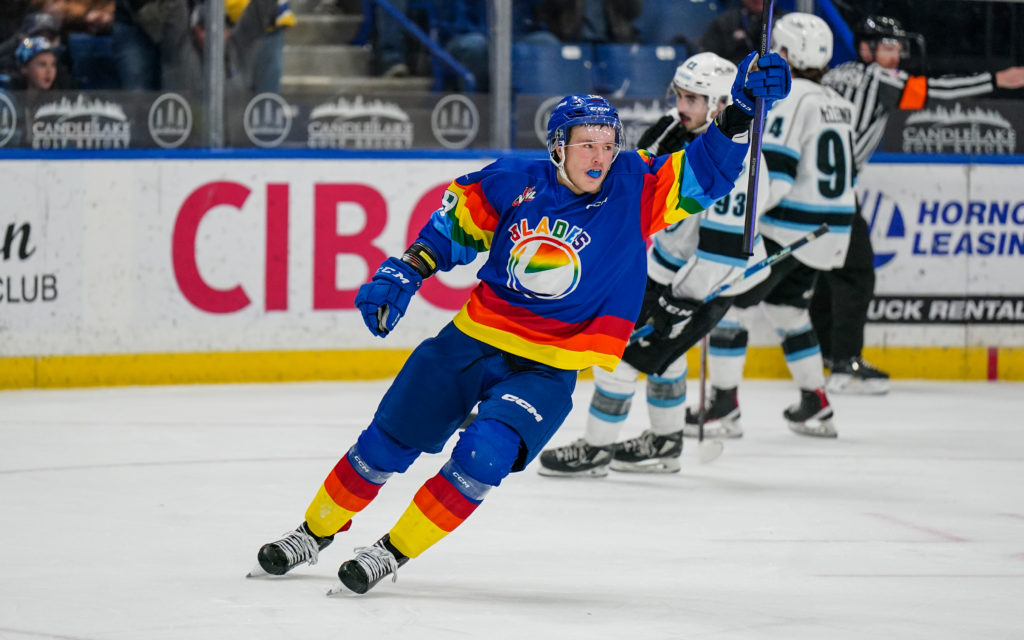 It was a celebration of inclusion and acceptance in the community, as Pride Night sponsored by Discover Saskatoon took over the arena!

The boys sported special Pride-themed jerseys, complete with a unique logo, and rainbow aesthetics on the numbers, socks and sleeve/waist striping. Different words relating to the Pride community replaced the player’s name on the back as well.

Want to own one of these unique jerseys? You can bid on all the game worn jerseys from Pride Night online now up until 12:00pm Dec. 4th.  All proceeds from the auction will go towards OUTSaskatoon.

Winnipeg scored immediately into the game, pouncing on a Blades tripping penalty. Forward Ty Nash one-timed a feed from behind the net in the slot to earn his 12th of the year. It also gives Nash goals in six straight contests.

Penalties became a re-occurring theme the rest of the period. Ten minor penalties handed down and two major’s. Saskatoon came into the game with the best powerplay percentage in the league on home-ice, and kept the trend going halfway through the first.

Carrot River, SK product Jayden Wiens brought the over 5000 fans in attendance to their feet, deflecting an Aidan De La Gorgendiere point shot. It was a bit of a cold start this year for Wiens, but the forward has four goals and an assist in his last five.

Wiens gets his stick on Dela's point shot to tie the game on the power play! pic.twitter.com/KSUlnGIY6i

A whole seven seconds later, Egor Sidorov took everyone’s breathe away. The Belarusian forward scored a gorgeous between-the-legs goal, flicking it past ICE netminder Mason Beaupit. Sidorov’s tally gave Saskatoon the 2-1 lead halfway through the first, and it wasn’t the last he would be seen.

It was an electric first as both teams traded high danger chances. Play was more reserved in the second, but Blades goalie Ethan Chadwick came up big when called upon.

Blades forward Vaughn Watterodt lit the lamp with under five to go in the middle frame for his fifth this season. He found the back of the net in the middle of the slot following a snappy tic-tac-toe play with forwards Tyler Parr and Trevor Wong.

The ICE clawed back early in the third making it 3-2 Blades. Aiden Oiring put away a loose puck in front of Chadwick for his fourth on the campaign.

Sidorov gave the Blades some breathing room with his second of the game, regaining the two-goal lead. The insurance marker was initially under review after a potential ICE goal at the other end, but it ultimately counted.

Winnipeg stepped on the gas as the period began to close, but hats came raining down instead for “Sid’s” hat-trick goal. The Blades sophomore is making it known he’s a serious threat in the league. He has 12 goals and 21 points in only 10 contests.

Sidorov's hat-trick goal is as beautiful as they come 😍 pic.twitter.com/Eg7iYnbg0K

It was a milestone night for alternate captain Trevor Wong who played in his 150th career WHL game. He turned in three assists and is good for the team lead in points at 26. The speedy 5-foot-9 center is closing in on another milestone, one off 100 career WHL points.

The Blades improve to 16-5-0-0, good enough for third in the Eastern Conference. It was an important win for Saskatoon, who have some ground to make in catching the Red Deer Rebels and ICE.

The Blue and Gold ended their five-game homestand on a high-note. They head on the road for three games in Alberta, starting in Edmonton against the Oil Kings, before trespassing in Red Deer and Medicine Hat against the Tigers.