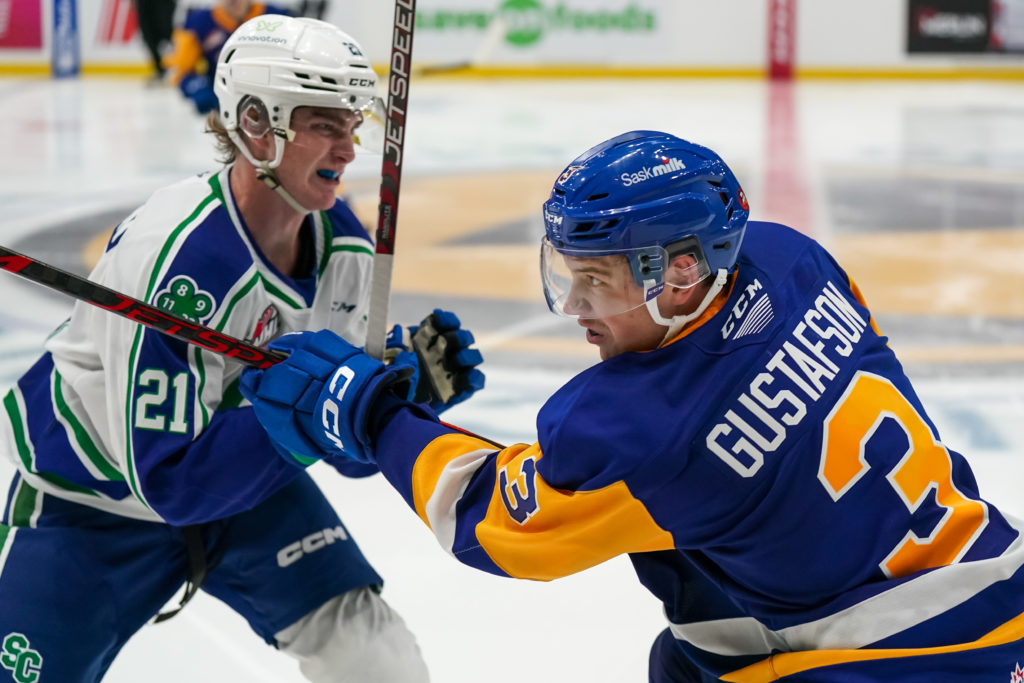 Saskatoon, SK – The Saskatoon Blades continued their hot start to the season, defeating the Swift Current Broncos 8-3 on a night that saw eight different Blades skaters find the back of the net.

That's three in a row to start the season. Not too shabby 😁 pic.twitter.com/7UnFN9L9vE

Conner Roulette and Josh Pillar wasted no time making an impact on their return, when their line opened the scoring five minutes into the game. Egor Sidorov played it in behind the net to an open Roulette, who fed Pillar in the high slot where he buried it top corner. The Broncos responded quickly, equalizing the game two minutes later off a goal by Conner Hvidston. From there it was all Blades. Rowan Calvert and Justin Lies would add two before the first intermission to increase the lead to 3-1.

Josh Pillar quickly gets on the board in his return.#BladeCity pic.twitter.com/SUhWXypBkQ

In the second frame, Sidorov would receive a softly placed from Roulette two minutes in before he put it past Reid Dyck to make it 4-1. The Blades, who weren’t done on the night, found the back of the net on the penalty kill from Trevor Wong, who netted the first short-handed goal of the season. Aidan De La Gorgendiere and Jayden Wiens would add two of their own to make the score 7-1. Swift Current added a goal late in the second period, making the score 72 heading into the third.

In the third period, Marek Schneider would shoot the puck from the point through a screen and find the top corner to extend their lead by six goals. The Broncos would add one more in the third which would be the final goal of the contest.

Marek Schneider is the eighth Blades goal scorer of the night. 👊#BladeCity pic.twitter.com/JIRrfPimVf

On a night where goal scoring over shadowed the goal keeping on the side of the Blades, Ethan Chadwick made three key saves on fast breaks, to keep the lead for the team in front. The goaltender made 24 saves on 27 shots to roundup the night for an excellent performance overall by the team.

Saskatoon takes on Lethbridge Hurricanes next at home Tuesday, October 4th. Puck drop is scheduled for 7:00 pm as the Blades look to remain undefeated.