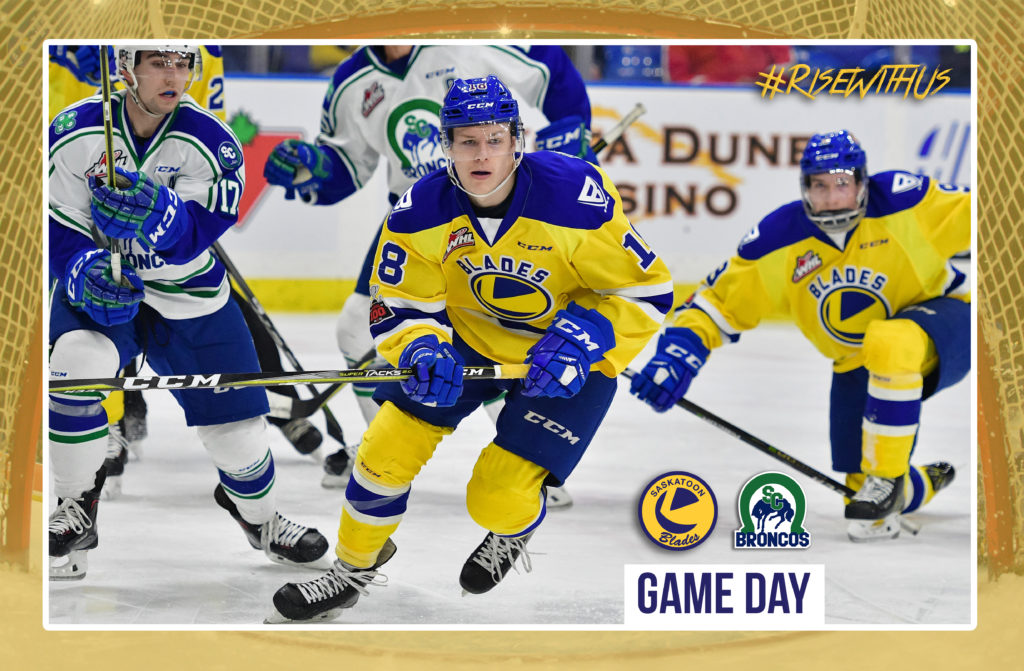 Tonight – The Saskatoon Blades visit their most familiar foe this season in Swift Current for meeting number 5 of the year with the Broncos. Swift leads the 8 game season series 3-1 right now, the last meeting a 6-4 Broncos win on Nov. 10th in Saskatoon. Saskatoon will look to carry the momentum from last night’s game in Moose Jaw as they prepare for another WHL powerhouse in the Broncos.

The opponent – Swift Current comes into tonight’s game after losing 7-3 to the Wheat Kings in Brandon on Sunday. It was the end of a 3 games in 3 nights weekend for the Broncos, so they should be refreshed and ready to go. The Broncos are the 2nd best team in the Eastern Conference behind only Moose Jaw, and the 4th best team in the WHL. Their top line of Aleksi Heponiemi, Glenn Gawdin, and Tyler Steenbergen have taken the league by storm this year. All three forwards sit in the league’s top 5 scoring with Heponiemi leading the way with 54 points in 21 games, and Tyler Steenbergen right behind with 31 goals and 53 points in 21 games. The Broncos have went 6-4 in their last 10 outings.

For Saskatoon – As the old cliché goes, the Blades need to put together a full 60 minute effort. Last night, Saskatoon scored 4 unanswered goals on the top team in the league to comeback from a 6-2 3rd period deficit and force overtime. The Warriors won it in the extra frame but it could have been a different outcome had the Blades showed that sense of desperation from the get go. Tonight, the Blades go up against the best power play in the league, so discipline has to be better and so does the penalty killing unit. Last night Saskatoon gave Moose Jaw 5 power plays and surrendered 3 goals, which makes it awfully tough to win games. Last time the Blades were in speedy creek, Cam Hebig scored a hat-trick. He also had another hat-trick last night. Saskatoon will need Hebig to keep the pedal down and drive the offense once again.

The lineup – Don’t expect too many changes from last night. Again, Kubic and Christensen remain on the IR while Seth Bafaro is still dealing with the flu, so he is unlikely to return. Up front, Brandon Machado and Arjun Atwal were the odd men out last night so if there are changes to be made one, if not both could draw back into the lineup tonight.