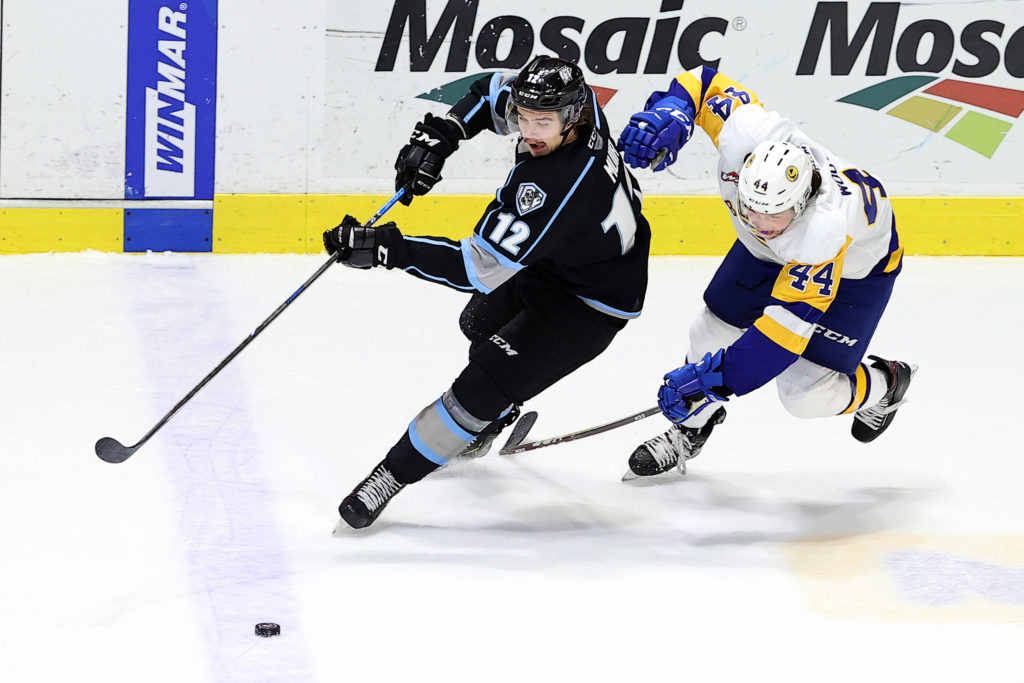 REGINA, SK — Captain Peyton Krebs picked up a goal and an assist, and Owen Pederson scored the overtime winner as the Winnipeg ICE skinned the Saskatoon Blades 3-2 on Tuesday afternoon.

Saskatoon (9-2-2-0) is now winless in three straight and will try to get back on track Thursday night, battling their closest rivals, the Prince Albert Raiders.

Winnipeg (9-4-0-0) also received a goal from Chase Bertholot while Evan Patrician and Tristen Robins notched both markers for the Blades. The ICE have won two out of three against Saskatoon this season, with both victories coming in overtime.

Blades netminder Nolan Maier, whose most recent victory came in historic fashion against the ICE last Wednesday, made 29-saves and was given the game’s third star. Krebs, who scored Winnipeg’s overtime winner against the Blades on March 17th, took first star honours and ICE netminder Carl Stankowski earned the second star. Stankowski stopped 27 of 29 shots fired his way.

A fast-paced opening 20 minutes featured one goal, tallied on the powerplay by Krebs. The Vegas Golden Knights prospect walked into the right-wing faceoff dot and found a hole over the blocker of a screened Maier.

Saskatoon threw 12 shots on goal and went 1-for-2 on the penalty kill in the first period as compared to eight shots against.

Kyle Crnkovic and Tristen Robins tag-teamed to tie the game 8:00 into the second period. Crnkovic, who leads the team in scoring, flew in on the left wing before chipping a pass to Robins in front. Robins, drafted in the 2nd round by the San Jose Sharks last fall, one-timed his seventh goal of the campaign home and giving Crnkovic his 16th point of the season.

Chase Bertholet regained the ICE lead with 3:50 left in the second period. Parked near the left faceoff dot, the right-winger was fed a pass from Skyler Bruce and fired home his second of the season over a sprawling Maier.

Third-year forward Evan Patrician had the answer for Saskatoon early in the third period, whacking home a blocked shot blindly on his backhand that escaped under the pad of Stankowski. Charlie Wright and Brandon Lisowsky collected assists on Patrician’s fifth of the year.

Backhand out of the air? Oh sure, Evan 😮🚨 pic.twitter.com/J2xsA2YNTT

Both teams traded off several chances in the third period to break the 2-2 tie, but Maier and Stankowski weathered the storm from either side. Saskatoon held a narrow 29-28 shot advantage following 60 minutes, but overtime would be required to declare a winner.

In the extra frame, Blades captain Chase Wouters took a two-minute minor for tripping 24 seconds in. On the ensuing powerplay, Krebs took a shot from the left-wing circle which dribbled through the legs of Maier. Pederson was there to poke home the winning goal, giving the ICE a 3-2 victory.

Winnipeg went two-for-three on the man-advantage while Saskatoon was held goalless on two powerplays.

The Blades will try for their first victory since March 31st on Thursday, battling the Prince Albert Raiders at 6:00pm MT.