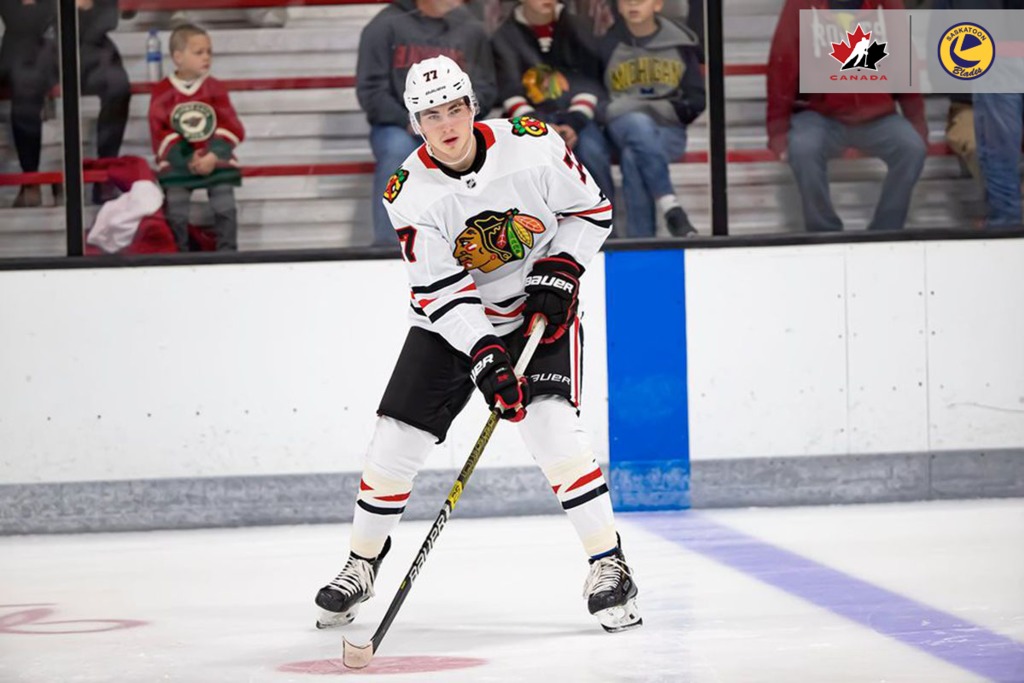 The budding superstar for the Chicago Blackhawks and former member of the Saskatoon Blades has been loaned to Hockey Canada, and is expected to make his World Junior Championship debut in December.

ON LOAN: Forward Kirby Dach has been loaned to the Canadian men’s national junior ice hockey team for the 2021 IIHF World Junior Championship.

The loan is contingent on the start of the 2020-21 NHL season. #Blackhawks pic.twitter.com/zRWqSyl4xN

This news comes mere hours after Hockey Canada released its list of 47 players invited to its annual World Junior Team Selection Camp. Dach will lace up with the rest of the invites at the end of November in Red Deer. AB.

“Obviously as a kid growing up in Canada, I remember watching every World Juniors and dreaming of one day playing,” said Dach. “It’s an incredible opportunity, and I’m honoured to represent my country with the goal of winning a gold medal. To be a part of this is a dream come true.”

The 19-year-old is erupting into the NHL spotlight as one of the game’s most prolific young stars. After being drafted 3rd overall by Chicago in 2019, Dach battled for a full-time roster spot in his first NHL training camp and earned a permanent role — simultaneously ending his career in Saskatoon. The Fort Saskatchewan, AB product piled up 8 goals and 23 points in a shortened regular-season as a rookie.

Dach elevated his game in the 2020 Stanley Cup Playoffs, helping the Blackhawks defeat the Edmonton Oilers in the play-in round and earn a playoff spot. He notched 1 goal and 5 assists in 9 post-season games.

Dach says with the NHL’s regular-season start date still up in the air due to the COVID-19 pandemic, it gave Chicago the ability to let him skate at Team Canada’s selection camp without missing any action with the Blackhawks. Actually playing in the tournament remains dependent on an NHL start date

“I’m not going to let the opportunity squander, I’m going to go there and play my best and represent my country to the best of my abilities,” added Dach. “The goal is to win a gold medal, and I think we have the team to do that. We have a bunch of guys who’ve won gold in the past, either returning from last year, or at the U18’s two years ago. We’re hungry for gold and we’ll do what we can to win.”

In joining Team Canada, Dach is reunited with current Blades head coach Mitch Love, who’ll take a spot on the bench as an assistant coach for a second straight year. Dach spent one year under Love’s guidance in Saskatoon, notching 76 points in 62 games during the 2018-19 season.

Previous to that, the two linked up at the 2018 Hlinka-Gretzky Cup, striking gold.

“I talked to Lover a week ago, we have a pretty good relationship,” continued Dach. “we won gold together at the U18’s. We had a good year with him at the helm and he’s obviously turned the team around with two winning seasons back-to-back. He’s a good coach, he’s smart and he’s really good with the players. He knows how to get the best out of his players individually and as a team.”

“I’m excited to work with Kirby again along with all the other invites who will take part in Hockey Canada’s Selection Camp next month,” said Love.

Dach, Love, and the rest of the Canadian Junior Team will attend selection camp in Red Deer from Nov. 16th to 23rd. Following camp, the roster will be cut down to form the final team, which will compete for World Junior gold from Dec. 25th to Jan. 5th in Edmonton, AB.