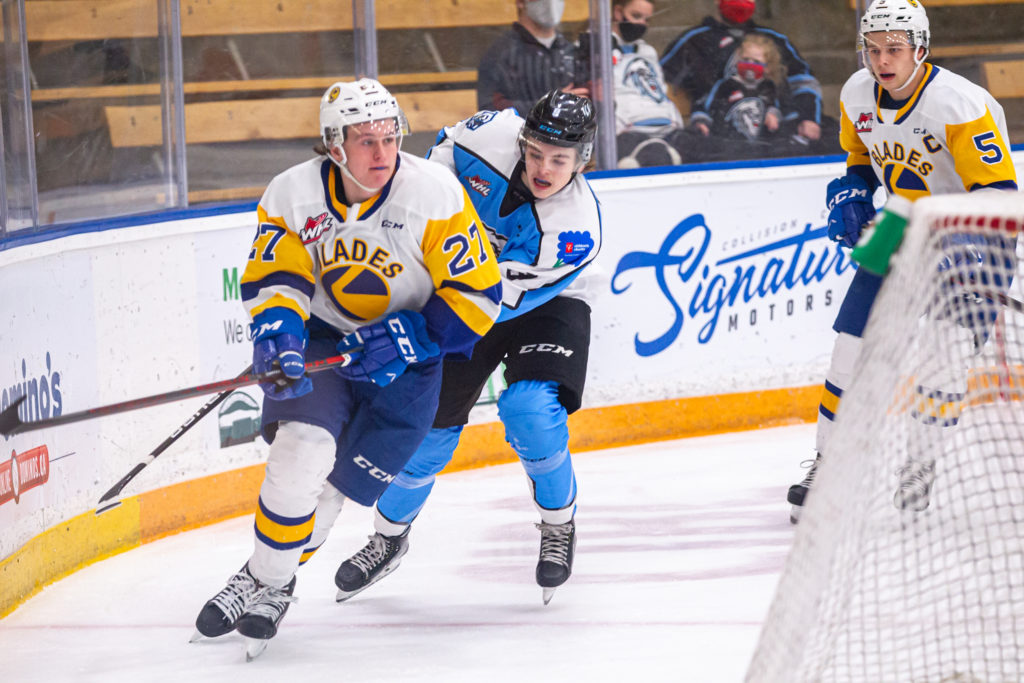 WINNIPEG, MB – Two goals in the final 10 minutes of play wasn’t enough as the Saskatoon Blades were edged by the Winnipeg ICE 4-3 to open a two-game series at Wayne Fleming Arena.

The boys in blue & gold put on monumental pressure as time was winding down, but couldn’t solve Gage Alexander to complete the comeback.

Brandon Lisowsky and Jayden Wiens lit the lamp in the final frame to cut the ICE lead to just one. Kyle Crnkovic also scored his team-leading 13th of the campaign, and added an assist to claim the game’s third star.

The two divisional foes will complete the weekend set on Saturday, concluding Saskatoon’s stretch of nine straight games away from home.

Winnipeg got the hot start on Saskatoon, jumping to a 2-0 lead through 20 minutes of play thanks to goals from Mikey Milne and Jakin Smallwood. Connor Geekie struck 7:56 into the second to give the ICE a seemingly commanding 3-0 lead, but Saskatoon began marching back in the latter half of the game.

Crnkovic got Saskatoon on the board less than two minutes after the ICE picked up their third of the night, cutting the lead to 3-1. After a shot from Lisowsky was stopped by Alexander, Crnkovic slinkied his way behind the ICE defence to put the rebound over the netminder’s right pad.

Rebounds are dangerous when #16 is in front 😏 pic.twitter.com/d6qI2Pj42P

Winnipeg regained its three-goal lead with less than a minute to go in the second. Connor McClennon capitalized on his league-leading 20th of the campaign to make it 4-1 after 40.

But the Blades had the answer in the third, beginning with a bizarre play in front of Alexander. Tristen Robins and Owen Boucher were tied up wrestling with one-another on the left circle. Lisowksy, parked alone in front, took a pass from Crnkovic and made easy work of collecting his 10th of the season.

Keep your eye on the puck, kids. pic.twitter.com/5h3o3jX0bl

Saskatoon would make it a one-goal game just 2:20 later as Tristen Robins powered his way into ICE zone where his shot bobbled onto the stick of Wiens for his fifth.

The Blades pulled Maier with 1:40 remaining in the third and fed all they could towards the goal, but ultimately came up one goal short of a massive comeback, falling 4-3.

Nolan Maier made 25 saves in the loss, while Alexander faced the same number and turned aside 26. Saskatoon’s special team’s was also firing, going 1-for-3 and holding the league’s number one powerplay unit scoreless on one opportunity.

The rematch goes Saturday night from the Wayne Fleming Arena at 7:00pm. As always, you can listen to the action live courtesy of Les Lazaruk on 600 CJWW Radio, or tune into the live stream on WHLLive.com.