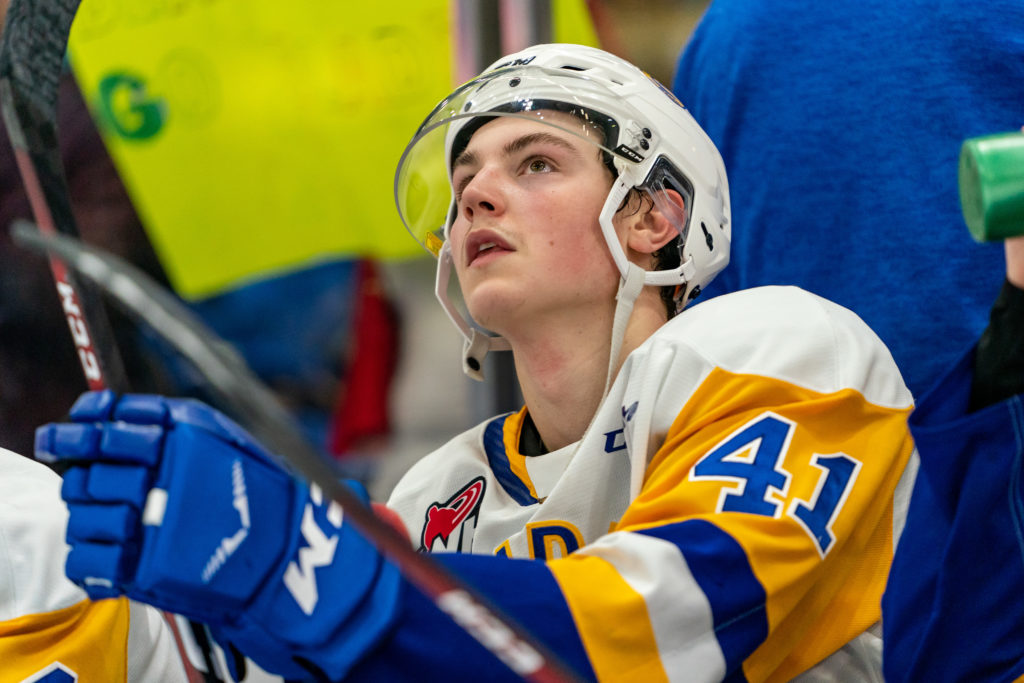 He may have been playing for the Prince George Cougars at the time, but Rhett Rhinehart didn’t have very far to travel after he was traded to the Saskatoon Blades.

“I was actually in Saskatoon when I got the news,” said the 18-year-old defender, noting his team was staying in the Courtyard Marriot near the Saskatoon Airport. “I was on their Sask road trip at the time. I immediately called my dad and told him the news, then texted my old teammates and told them what room I was in.”

That occurred January 9th of this year, marking the second time the burly defender was dealt in the days leading up to the WHL trade deadline. He experienced that same bittersweet feeling when the Prince Albert Raiders, the very team which drafted him 13th overall, sent him to B.C.’s Peace Region in 2018.

“It was many mixed emotions,” continued Rhinehart. “I was ecstatic to be coming to an organization like Saskatoon and being way closer to home, but on the other hand, missing my old teammates and billets and friends in P.G. was tough.”

Rhinehart says Blades Associate GM Steve Hildebrand made the move as seamless as possible, helping pay for his dad to travel to and from Prince George to collect his things.

While it was a complete whirlwind at the time, deep down, the Lloydminster, AB product knew this move would open many more doors of opportunity.

Rhinehart was already well-recognized among pro scouts, having a mid-season rank of 111th in NHL Central Scouting’s charts, and now he was joining the likes of Tristen Robins and Koen MacInnes, who were also listed in the mid-season ranks.

“The trade to Saskatoon allowed me to showcase more than I was in Prince George,” added the 6-foot-4, 205-pound defenceman. “Saskatoon being a big centre and having other players on the team that are draft eligible and also ranked makes it more of a hotspot for scouts to come watch. It allows us to showcase ourselves more.”

As is the case with many changes of scenery, the switch to Blades hockey came with some growing pains. Rhinehart’s playing style changed into more of a shutdown, defense-first mentality, which helped him excel in all areas of the ice. He became a reliable piece to the Blades penalty-kill unit, using his size and physicality to his advantage.

“My defensive play grew a lot this year,” he said. “being put into more important roles to shutdown other teams top players challenged me a lot and helped me progress during that time.”

But while his defensive game began to shine, Rhinehart’s scoring production began to slip, and NHL Central Scouting dropped his final rank by 40 positions to 151st among North American skaters. In 21 games in a Blades uniform, he notched three assists to go with 20 penalty minutes and a +1 rating.

“It’s tough having my rank go down from the mid-season mark,” he continued. “I wasn’t able to keep up the points that I was producing from the first half of the season, but I believe the other parts of my game began to excel, especially my defensive game and physicality.”

Rhinehart signed off on the shortened 2019-20 campaign with 3 goals, all of which scored with the Cougars, and 15 helpers for 18 points over 57 games.

Next stop for Rhett Rhinehart? Potentially the NHL.#BladeCity | @Rhinehart16 pic.twitter.com/lftqQBN35d

Numbers aside, it’s clear Rhinehart is becoming a cornerstone to the Blades blue-line, and will surely be relied upon next season without the help of graduating vets Nolan Kneen and Scott Walford. Until then, he’s working hard to be as prepared as possible for when he returns to the ice, catering an off-season training regime towards speed and agility.

“I’m continuing to work on my foot-speed,” he added. “Me, being a big guy, it’s important for me to be able to stay with the small, quick, and shifty players. I’m also working to keep my conditioning up, while adding muscle.”

And while his path through the WHL has been tumultuous and a little unpredictable, Rhinehart has still been able to gain recognition among the professional ranks, and is excited at potentially hearing his name called in the NHL Draft later this year.

“It’s an awesome feeling for sure,” he said when asked about the recognition he’s received from NHL Central Scouting. “It’s been a goal of mine to be drafted into the NHL for a very long time. I’m close to getting there, but I know there is more work that needs to be done. It’s exciting to see my hard work beginning to pay off.”