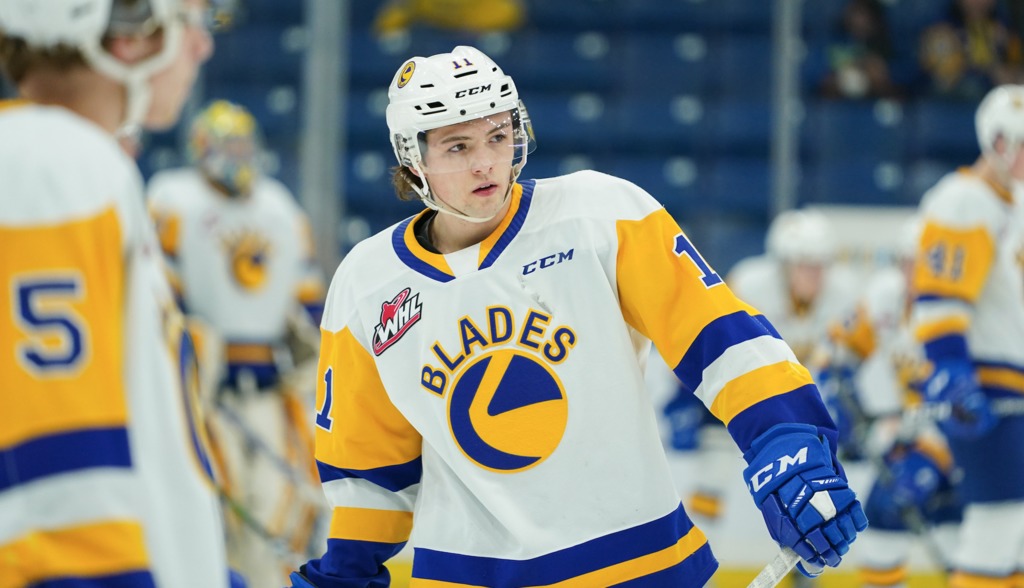 From the fourth-line as a rookie, to the Blades go-to weapon as a sophomore, Tristen Robins has built himself into one of the WHL’s top rising talents. Soon, he could find himself laced in National Hockey League threads.

The speedy centreman for Saskatoon has established a great reputation among scouting brass, and is poised to potentially hear his name called in this year’s NHL Entry Draft.

Except there’s one problem.

The NHL has postponed its annual event, initially scheduled for June 26-27, due to COVID-19 safety precautions. So as it stands, there’s no clear word on when, or if, all teams will gather at the Bell Centre in Montreal for the draft.

Regardless of how this year’s draft class will be chosen, it’s fair to assume Robins will be in attendance, listed in NHL Central Scouting’s final ranks at 86th among North American skaters.

“It would be one of the most, if not the most special day in my life,” said Robins, who’s one of five Blades to make the final list. “It’s a dream of mine, like most young hockey players, to watch the draft in hopes of hearing their name called.”

With five Blades named to NHL Central Scouting's final rankings, we're tied for the most among teams in the WHL.

Robins is coming off a breakout 2019-20 campaign, lighting the lamp a team-high 33 times to compliment his 40 assists. His 73 points put him sixth in the Eastern Conference scoring race, and 14th across the entire WHL.

A large bulk of those digits came in the second half, when the Clear Lake, MB product piled up 24 points over the last 13 games prior to the season’s cancellation. NHL scouts took notice, and propelled Robins 48 positions from his mid-season rank.

“I would credit that surge just from all the training that I did to prepare myself for this year,” added the 18-year-old centerman. “I spent a lot of extra time in the gym and on the ice working on all the little things that in my opinion helped me have the year that I did.”

Robins says COVID-19 safety measures have forced him to use a creative approach to off-season training. Physical distancing requirements have virtually shut down training facilities across the country. This means Robins has taken it upon himself to stay in shape at home, rather than training in a fully-equipped gym. But he says if he gets the call to attend an NHL rookie camp, whenever that may be, he’ll be ready.

“I have been working out with the gym equipment that we have,” he continued, noting his conditioning is what he’s focusing on the most. “Our family just got a new Peloton bike as well, which keeps my heart-rate high while also increasing my endurance.

“Given the circumstances, I am very fortunate, and I know that I have all that I need to maintain my physical strength. I just can’t wait to actually get back on the ice and start skating.”

Robins says he understands it could be a while before the NHL Draft takes place, or before we know how it will be conducted. While he’s not getting too ahead of himself just yet, he says he’s enjoying the anticipation of potentially hearing his name called.

“I don’t really care too much about where I have been ranked, I’ve put all that in the back of my mind and am just looking forward to watching the draft with my family,” he added. “Whether I get drafted or not, I’d just be excited to head to an NHL camp and leave a good impression on the coaching staff, wherever that may be.”