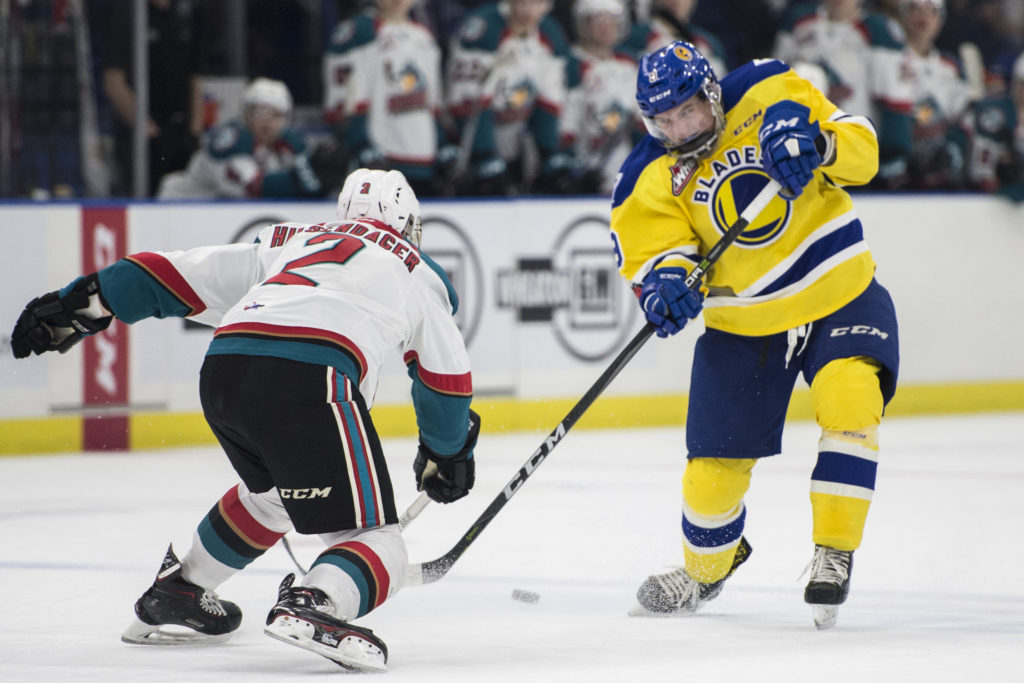 Saskatoon, SK – Saturday night saw the Saskatoon Blades 3 game3 winning streak come to a screeching halt as they were shutout 5-0 by the visiting Kelowna Rockets. The loss leaves the Blades with a 14-17-2-1 record on the season with one more game before the holiday break; tomorrow afternoon playing host to the Regina Pats.

Kelowna opened the scoring at 8:44 in the first period. Passing the biscuit down low, it slipped past the Blades’ last man back giving the Rockets a 2 on none chance right on Ryan Kubic’s front door. With Kubic given no choice but to commit to defending him, Ted Brennan passed the puck back door to Jack Cowell who scored into a wide open net.

With 22 seconds left in the first, the Rockets struck again and held a 2-0 lead going into the first break. On the power play, Carsen Twarynski whacked at a loose puck right against the left post making it bounce up where it slipped in through a small gap between Kubic and the post. Saskatoon finished the period leading in the shot count 11-10 but chasing Kelownas’ 2-0 lead.

Back to back odd man rushes for the Rockets led to two more goals, doubling their lead at the final change to 4-0. Both goals were scored in similar fashion to one another with the Kelowna passing the puck off right across the blue paint to simply take advantage of the out of position Blades. Kyle Topping was the recipient of both goals, scoring the first 4:43 into the second period and the next 7:26 into the period. The remainder of the period was scoreless as the Blades continued to lead in the shot-count 25-19 but were unable to solve Rocket netminder James Porter.

Kelowna would add one more goal in the final minute of the game as Liam Kindree scored a short-handed marker to throw salt in the wound of an abysmal night for the Blades.

The power play struck out going 0/6 and allowing one goal, while the penalty kill was just OK stopping 2/3 Kelowna opportunities.

The Blades will look to end the first half on a winning note against the Regina Pats Sunday afternoon at SaskTel Centre. Game time is 4:00pm, and it’s the annual ‘Sing For Santa’ game at SaskTel Centre. There will also be a family skate with the team following the game, so fans are encouraged to bring their skates.