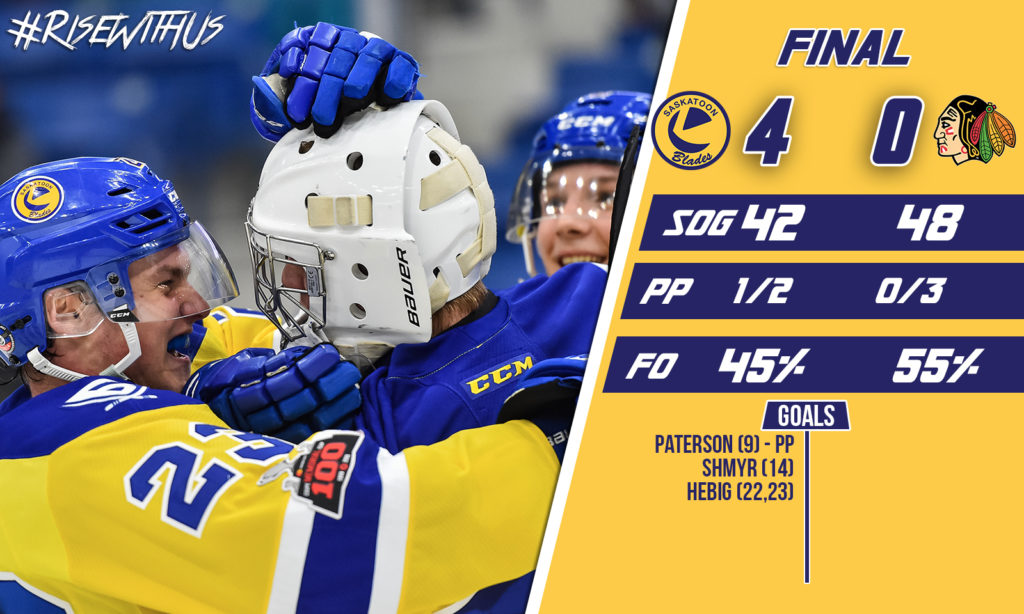 Portland, OR – The Saskatoon Blades went into Portland on Sunday evening and stunned the top team in the Western Conference in front of over 7100 fans with a 4-0 shutout victory. Nolan Maier was the star of the show making 48 saves for his 1st career shutout in the Western Hockey League. Saskatoon will now have Monday off to travel and prepare for their final stop of their US road trip in Kent on Tuesday night versus the Seattle Thunderbirds.

The Blades came out flying outshooting the Winterhawks 11-2 in the opening 10 minutes before running into some penalty trouble. Saskatoon was forced to kill of 3 penalties including a brief 5-on-3. But the Blades weathered the storm against the 2nd best power play unit in the league to get into the first intermission with zeroes on the scoreboard and an even shot count at 12.

In the second period, Josh Paterson shovelled in a greasy goal that was initially waved off. The referees went upstairs and after video review the call was overturned and Saskatoon took a 1-0 lead 6:02 into the middle frame. The go ahead goal came on the power play and was Paterson’s 9th of the season with Kirby Dach and Braylon Shmyr assisting.

Less than a minute after the goal, Mark Rubinchik stepped into Cody Glass causing a melee near centre ice. Skyler McKenzie jumped on Rubinchik’s back before the two got their gloves off for a scrap. Kieffer Bellows also went after Rubinchik but Chase Wouters was quick to come to his teammate’s aid resulting in two fights happening simultaneously. Both Wouters and Bellows were given five minute majors and game misconducts for the second fight. Skyler McKenzie was assessed 2 minutes for instigating, 5 for fighting and a 10 minute misconduct; Mark Rubinchik was also given five for fighting and nothing more due to the hit being deemed clean despite the opinions of the crowd in Portland. In what was already a high intensity game, the brouhaha escalated the energy of both teams and the crowd.

Portland continued to push the pace but the Blades were equal to the challenge. Nolan Maier had fans in disbelief several times throughout the game but his biggest save might have come against Brad Ginnell on a 2-on-1 rush to keep the Blades up 1-0.

ARE YOU SERIOUS NOLAN?! pic.twitter.com/i7sI0UcmDA

Saskatoon doubled up on their lead thanks to Braylon Shmyr collecting a Cam Hebig rebound for his 14th of the season. The 2-0 advantage held up after 40 minutes with the shots tilted 35-30 in favour of the Blades.

The 3rd period was 20 minutes of thrilling hockey in which the referees decided to put away the whistles. No penalties were called and the teams exchange chances off the rush with both goaltenders continuing to slam the door. The Winterhawks threw everything they could at the Blades goal outshooting Saskatoon 18-7 in the final 20, but just couldn’t solve Nolan Maier.

Cameron Hebig added an insurance marker with exactly four minutes to play, and then put the nail in the coffin with an empty netter in the final minute make the 4-0 final.

Braylon Shmyr’s goal and 3 assists earned him 2nd star honours on the night. Portland backstop Shane Farkas made 38 saves as the game’s 3rd star, and with a staggering 48 saves Nolan Maier was named the 1st star of the game receiving a begrudging standing ovation from the Portland faithful for his 1st career shutout in the Western Hockey League.

With 48 saves…. your first star tonight,

Saskatoon will practice in Kent, Washington, on Monday in preparation of their final stop on the US Division road swing on Tuesday night against the Seattle Thunderbirds. Game time is 9:00pm CST and fans can tune in live on the radio at 92.9 The Bull FM or stream the game online at whllive.com.