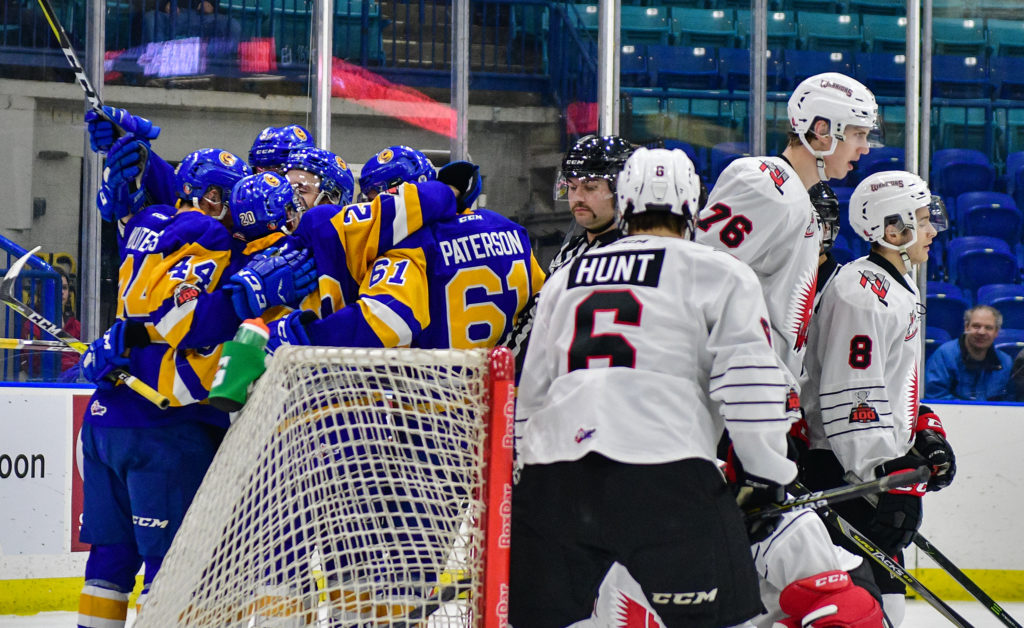 Saskatoon, SK – The Saskatoon Blades ended their two game skid with an exclamation point Wednesday night outscoring the top team in the entire league 5-4 at SaskTel Centre. It was the first of a six game series between the two divisional combatants who will meet next this Saturday in Moose Jaw and then again on Tuesday, also in Moose Jaw. The win improves the Blades record to 8-10-1-0 on the year while snapping a 6 game win streak for the Warriors; just their 5th loss of the season to now sit at 16-5-0-0.

57 seconds into the match and Moose Jaw found their way onto the scoreboard with their first shot of the night. Noah Gregor came in on Ryan Kubic with an odd man rush and opting not to pass, he scored in the top right corner instead over the glove hand of the Blades netmidner who was making his 14th consecutive start. Not a great sign considering the Blades were 2-7-1 when allowing the first goal of the game heading into this one. 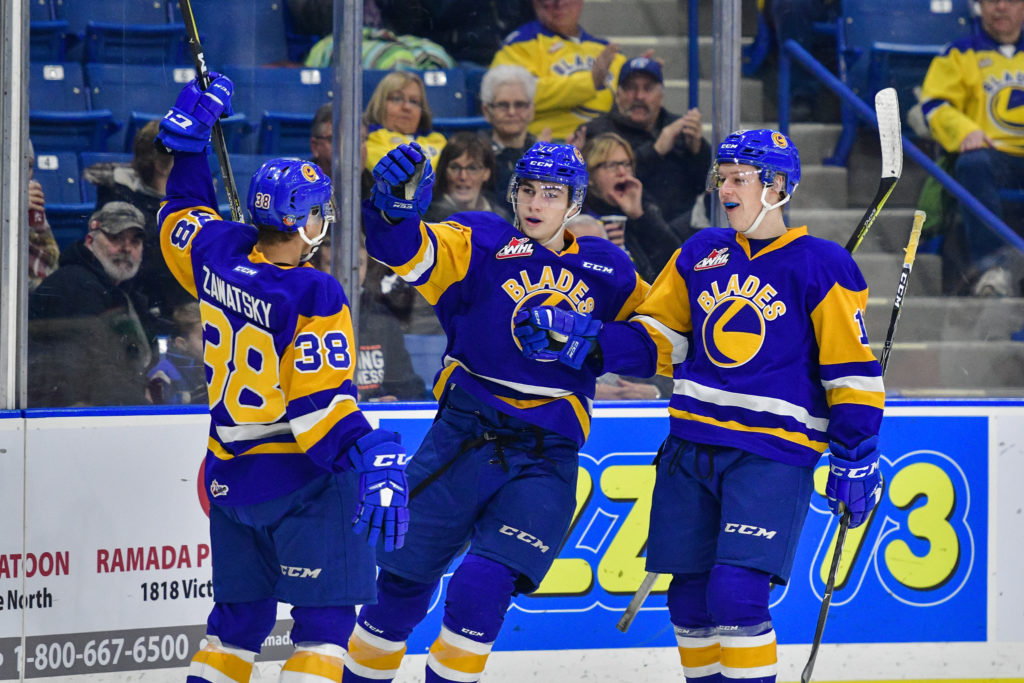 It wouldn’t take the Blades long to respond however, as 50 seconds later with his first ever WHL goal, Alec Zawatsky found the back of the net. He was set up by a beautiful Kirby Dach saucer pass from the deep corner of the zone that found its way through the goal crease and onto Zawatsky’s stick all the way on the other side of the posts. Libor Hájek picked up the secondary assist.

Things then tightened up until a Blades’ power play went wrong. 4:16 left in the period Justin Almeida intercepted a pass on Saskatoon’s offensive blue-line, creating a breakaway opportunity for himself. Going in alone on Kubic, Almeida dangled to open up Kubic and scored through the five-hole.

Having missed the last seven games due to an upper-body injury, Caleb Fantillo made sure his return to the lineup was noticed by notching a redirected goal off a Cam Hebig shot. Libor Hájek helped with his second assist of the night on. The first period ended with the score and shot counts level at 2 and 12 respectively.

After a missed opportunity on the power play early in the second period, Hebig was a man on a mission. Rocketing into the offensive third like a missile, Hebig carried the puck in and drew the attention of the Warriors’ defenders before softly passing it off to his line-mate Braylon Shmyr. Shmyr then fired a laser to score the Blades’ third goal of the evening and more importantly, take their first lead of the night.

Following a chain of successive shifts where the Blades controlled play and had the majority of scoring chances, a timely pinch on the blueline to keep the play onside led to another Blades’ goal. This time Chase Wouters stripped a Moose Jaw Warrior below the goal line and then fed Gage Ramsay in the slot. Ramsay’s initial slot was saved but he managed to score by battling home his own rebound to give the Blades a 4-2 lead with 12:15 left in the second period.

As the second period started to wind down, the Warriors struck again with 2:29 left on the clock. Behind the net, Brayden Burke pivoted around his man and dished the puck off to Tanner Jeannot who one-timed the puck in from the slot. The period finished with the score set at 4-3 in favour of the Blades, as the Bridge City Bunch also claimed the lead on the shot clock 34-20. 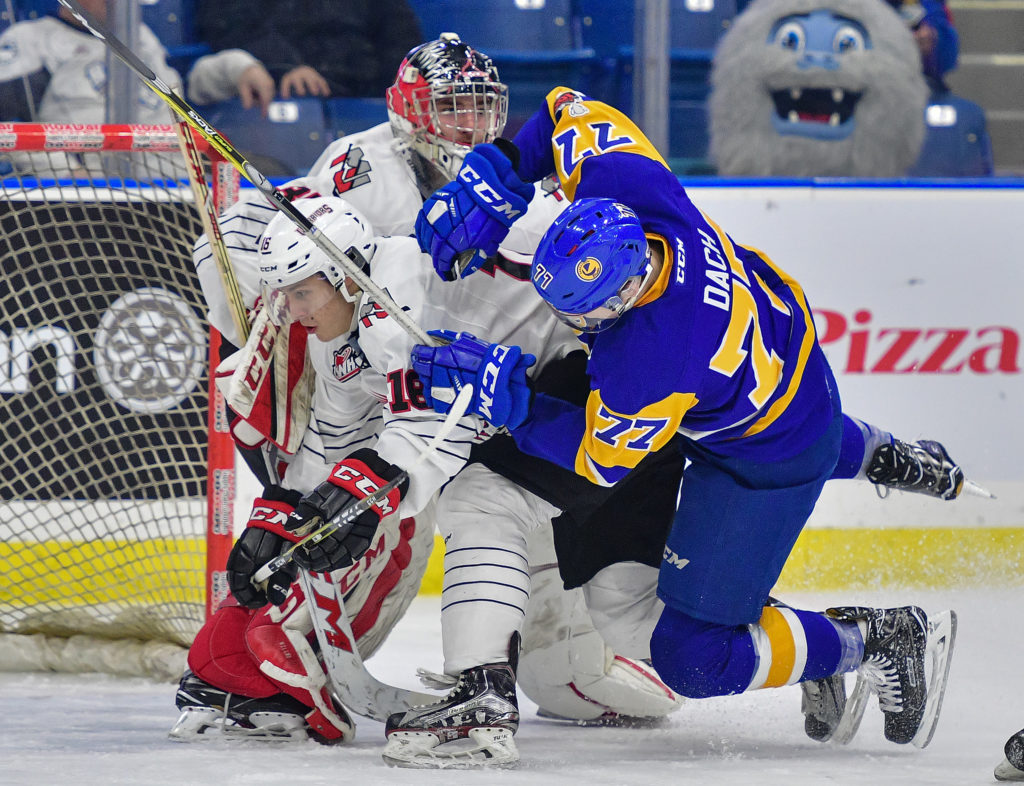 The Blades started the third controlling the play once more, but it would be Moose Jaw who found the back of the net first at 8:39, tying the game up at 4-4. A series of drop passes created an opportunity for the third man in on the rush as Daemon Hunt had lots of clear ice between him and Kubic to pick his spot.

Then with 4:45 left on the clock, the Blades were awarded their 4th power play of the night. A flurry of chances came up short however but the Blades weren’t done. Mark Rubinchik found the puck on the blue line and dished off to Evan Fiala who sidestepped his man before letting a high wrister go… The sweet ping of a bar-down shot set off the goal horn and the hometown captain let out a roar after realizing he scored his first of the season to put the Blades ahead 5-4 with 1:12 left on the clock.

The Warriors poured it all on the Blades goal in the final minute with the net empty, and thought they had evened the game when the puck crossed the line. However, the official had already blew the whistle after losing sight of the puck. Ryan Kubic held on to preserve the win. 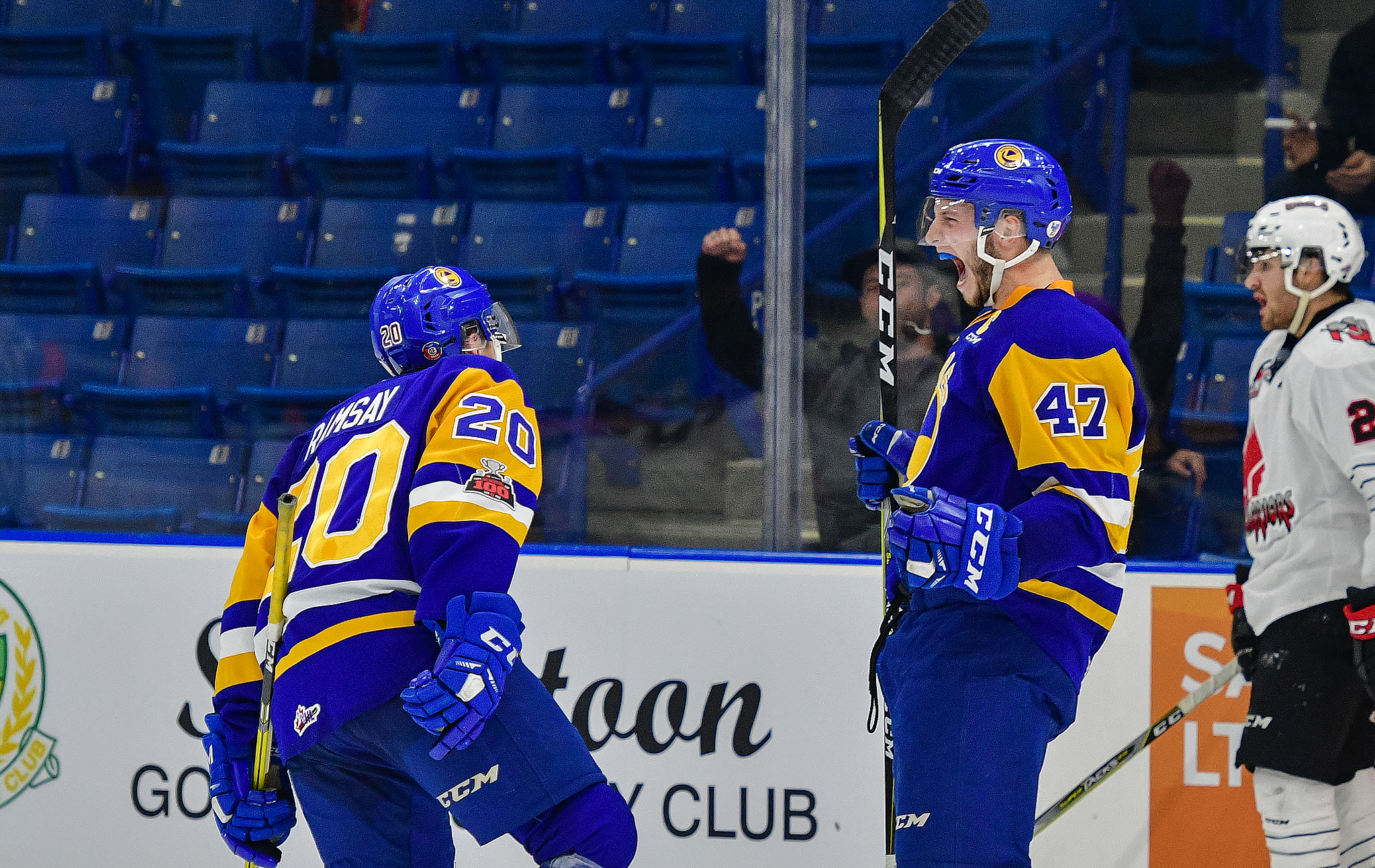 Kubic made 34 saves on 38 shots for his 8th win of the season. Cam Hebig was named the game’s 2nd star with 2 assists and Evan Fiala’s game winner undoubtedly brought the captain back out for his 1st star honour.

Neither team managed a goal on the man advantage; Saskatoon going 0/4 on the night while Moose Jaw struck out on three attempts.

Chase Wouters extended his point streak to three games with an assist and Libor Hajek’s two helpers give the veteran d-man 7 points in his last 6 games. 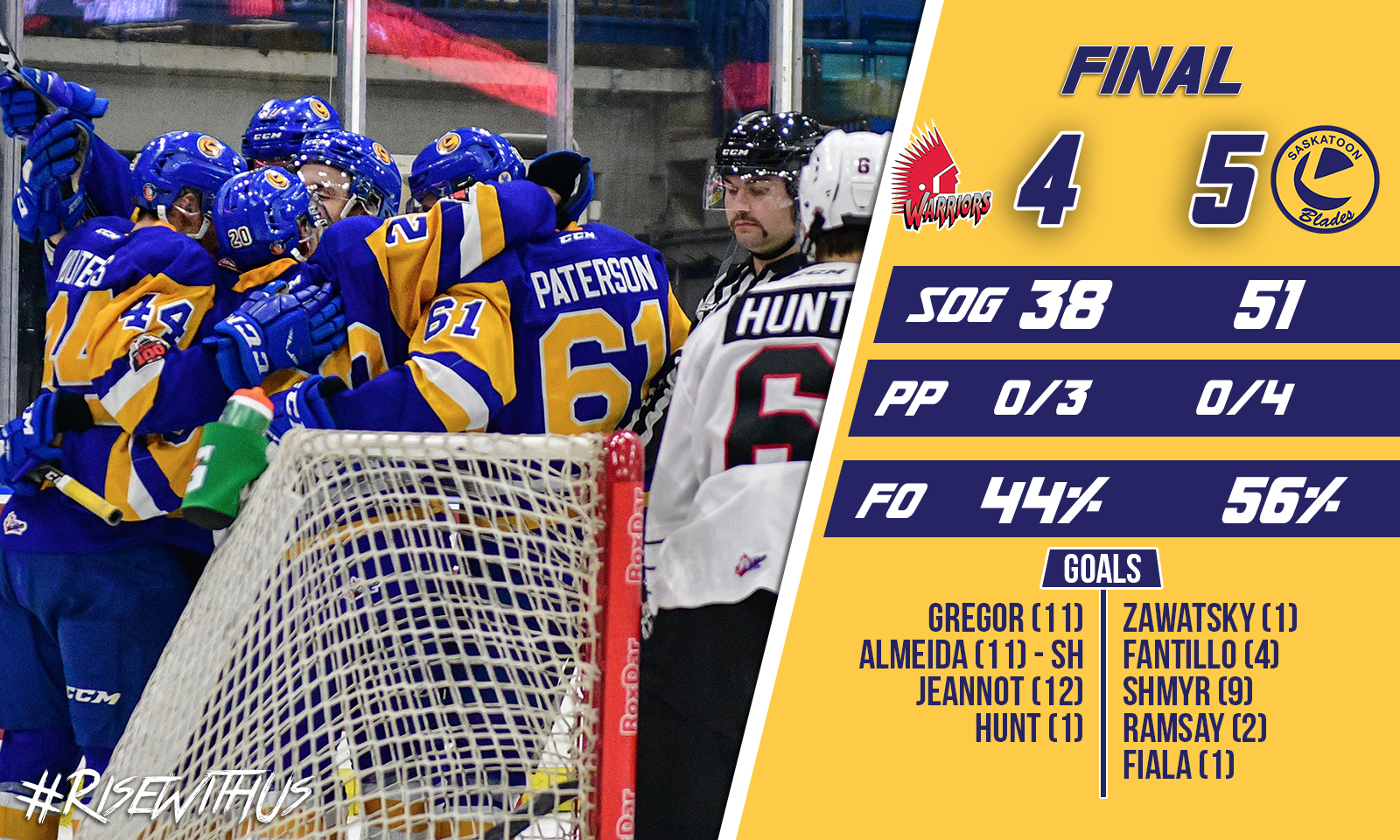 Next up for the Blades is meeting number three on the season with the Brandon Wheat Kings on Friday night at SaskTel Centre. It’s the Blades’ annual First Nations Night, game time is 7:00pm.