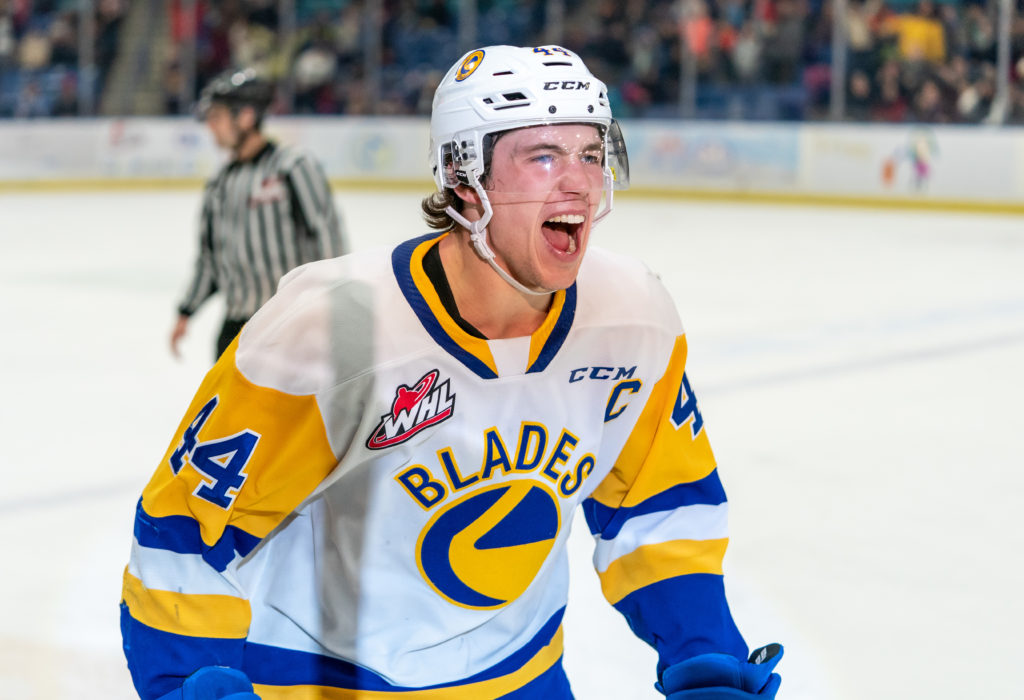 Saskatoon, SK – The Saskatoon Blades battled back from a 1-0 deficit to defeat the league leading Edmonton Oil Kings 2-1 in the shootout on Friday night in Saskatoon, despite playing with only 17 skaters.

Koen MacInnes made 36 saves to go along stopping four of Edmonton’s five attempts in the shootout. Chase Wouters tied the game late while Colton Dach’s fifth round shootout goal stood as the winner.

“It’s a challenge with 11 forwards, no doubt” said Blades’ Head Coach Mitch Love post-game. “But that was the cards we were dealt tonight based on the trade deadline today and I thought our kids did a pretty good job today given the minutes they had tonight.”

The game started slowly with only four shots in the first five minutes before Blades ran into some penalty issuese. Saskatoon took back-to-back penalties and had to kill off a 5 on 3 for over a minute but with the combined efforts of  Wouters, Nolan Kneen and Scott Walford, as well as Koen MacInnes keeping strong in net, the Blades killed off the penalties to hold the Oil Kings at bay. Tristen Robins had the Blades’ best chance of the period as he beat an Oil Kings defender to the puck but was unable to convert on the partial breakaway. Saskatoon took their third penalty of the period at the end and were once again successful on the kill as MacInnes finished the period stopping all 15 shots he faced.

The second frame saw both start slow once again with few shots on net. The Blades’ best change came as Riley McKay stayed onside and then beat his man to the net but was unable to get it past the Oil Kings’ goaltender Beck Warm. The period ended 1-0 to the visitors as Edmonton found the back of the net with just over six minutes to go on an odd man rush.

Again the third period begun with hesitant pace. Rhett Rhinehart left his mark in his first game as a Blade with a big hit at centre ice to bring some energy to the building, and despite strong goaltending by both netminders, Saskatoon was able to tie the game late. Walford and Kneen played before Walford fired on the net where Wouters got a piece of it to tie the game with 32 seconds left in regulation.

ON THE LAST BREATH!

Saskatoon carried the play for most of overtime as their best chance came off a Robins shot in the slot which caught iron.

The Oil Kings opened the scoring in the first round of the shootout and which was unanswered until the third round where McKay deked around Warm’s poke-check & got the puck over his pad  to keep the game alive. Two shooters later and Dach went in for his first career attempt and made no mistake to give the Blades the edge. On the Oil Kings ensuing shot attempt, MacInnes successfully poke-checked his shooter to seal the 2-1 victory for Saskatoon.

The Blades are is back in action immediately on Saturday evening for Kirby Dach Bobblehead Night presented by Brandt, as the Blades will attempt to make it three wins at home in a row.

Doors open at 6pm and puck drop is at 7pm. Click here to buy tickets. 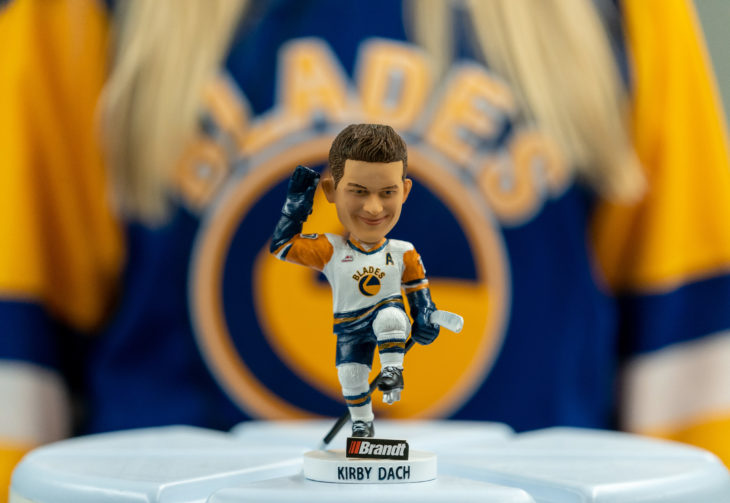