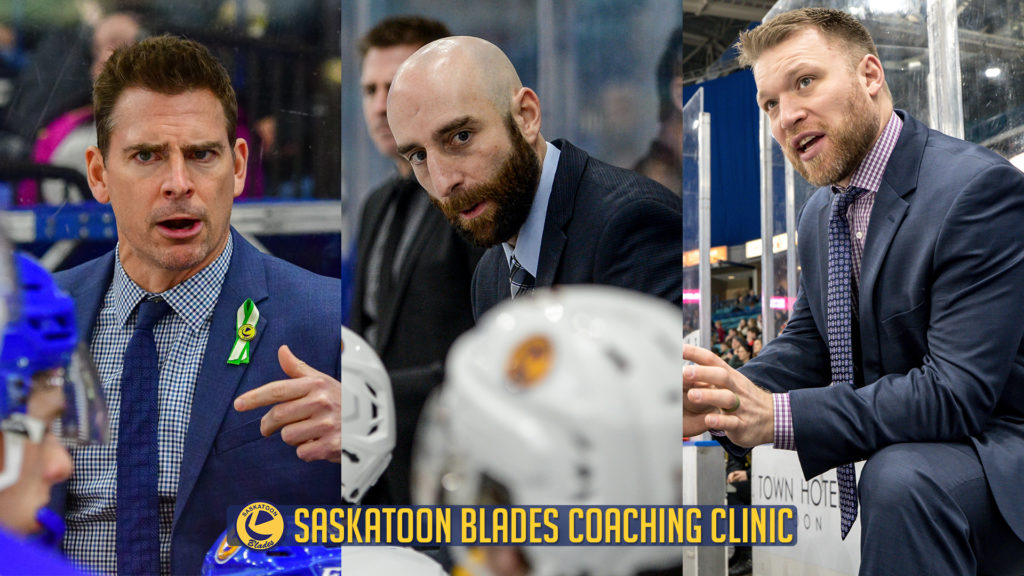 The Saskatoon Blades have opened registration for the first session of their 2019 Coaching Clinic, in partnership with the Saskatoon Minor Hockey Association (SMHA).

The Blades are excited to invite all current and aspiring minor hockey coaches to attend the first session of the coaching clinic series led by Mitch Love, Ryan Marsh, and Ryan Keller. The coaching clinic includes a practice viewing, video session, lunch with the Blades’ coaching staff, and a ticket to the Blades’ home opener.

Mitch Love is entering his second season as the Blades bench boss, has won a gold medal with Team Canada at the 2018 Hlinka-Gretzky Cup, and will serve as an Assistant Coach for Team Canada at the upcoming World Junior Championship in December.

Ryan Marsh is also entering his second season with the blue & gold and brings a wealth of experience including representing Canada at the World U17 Challenge in 2015 and again this coming November. Marsh is entering his 6th season as a coach in the Western Hockey League.

Homegrown coach Ryan Keller is getting set for his fourth season in the WHL. The former American Hockey League All-Star and Calder Cup Champion has also previously won the Spengler Cup with Team Canada and capped off an impressive playing career by winning the Swiss Cup in 2016.

The clinic will take place on Saturday, September 7th at Sasktel Centre and will begin with a live viewing of a Blades’ practice. This will be immediately followed by a video review session in the Original 16 Lounge. Lunch will be provided during the session which will be followed by an interactive Q & A talk.

The drills in the practice and explanation in the video session will be focusing on early season drills, player evaluation and practice planning and management. Coaches from all age and skill levels are welcome.

Tickets are priced at $40 and may be purchased by contacting Blades’ Business Office at 306.975.8844 or by emailing info@saskatoonblades.com

A second part of the Coaching Clinic series will be hosted in February 2020.