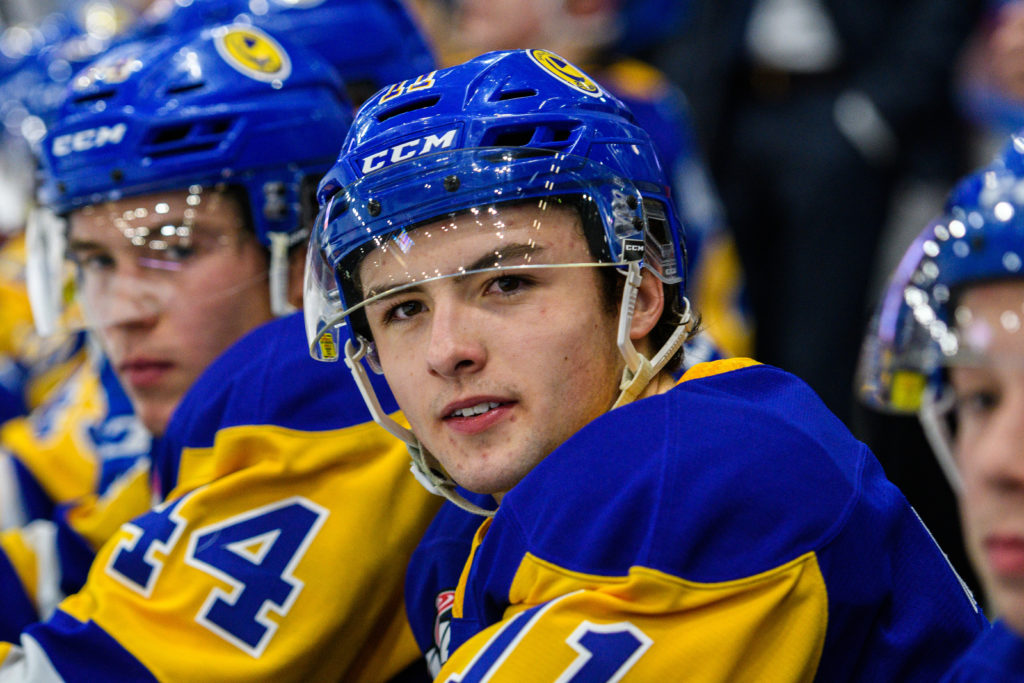 Tristen Robins is the lone Saskatoon Blade to be suiting up in an NHL training camp, along with numerous alumni under contract with various teams around the league.

The National Hockey League is back on the ice.

NHL training camps are in full swing ahead of a 56-game regular season, which begins January 13th. As is the case every year, the Saskatoon Blades have a plethora of alumni lacing up in various training camps. However, there’s a new name on the list of NHL camp attendees this time around, as Tristen Robins looks to leave an impression with the San Jose Sharks.

Selected in the 2nd round, 56th overall in the 2020 NHL Entry Draft, it was clear the San Jose Sharks saw something special in the young, speedy forward from Clear Lake, MB. That was reinforced even more last week, when Tristen Robins put pen to paper on a three-year, entry-level deal with the Sharks. The 19-year-old catapulted up the WHL scoring charts last season, finishing tied for 14th in league scoring with 73 points (33G-30A).

Congrats @tristenrobins1 on signing your first NHL contract with the @SanJoseSharks 👏 pic.twitter.com/k2cao1sWoA

For the record, @tristenrobins1 is currently in Chandler, AZ with the Sharks. He's attending his first NHL training camp after signing his ELC last week, but has another few days of quarantine before skating with the big guys.

This is Robins’ first NHL training camp, joining Prince Albert Raiders forward Ozzy Wiesblatt. Both players are currently placed in a group which must go through a mandatory quarantine, however they’re not locked in their hotel rooms. A mock-up ‘bubble’ gives players in this group freedom to leave under strict guidelines and restrictions. This allows Robins to skate and workout away from the hotel they’re staying at, before linking up with the main camp following isolation next week.

For the first time in Braden Holtby’s professional career, the Stanley Cup-winning goaltender for the Washington Capitals is skating for a Canadian team. The Lloydminster, SK native is one of the numerous goaltenders to find a new home last off-season, and settled on a two-year contract with the Vancouver Canucks. This is the first time Holtby is taking the pipes for a Canadian team since his playing days with the Saskatoon Blades 12 years ago.

Old and new. All looking good in that #Canucks blue. pic.twitter.com/dPNVpJ6oiN

Not only is the scenery new for Holtby, but he’ll also battle against teams he usually doesn’t see too often under normal circumstances. With the NHL’s divisional make-up change, the 31-year-old will only stop pucks from Canadian teams this regular season, giving Flames, Oilers and Jets fans even more incentive to tune in.

The man who famously coined “we’re not going home”, is in the process of leaving his Russian household and returning to the Dallas Stars crease this month. Anton Khudobin inked himself to a three-year contract with Dallas following the Stars magical playoff run — starring Khudobin in a lead role. The 33-year-old posted a 2.69 GAA and .917 SV% in 24 playoff games, helping Dallas capture its first Western Conference Championship since 1999.

According to the Stars, Khudobin is dealing with immigration issues and will miss the start of training camp.

We have an update on Anton Khudobin and Joe Pavelski as we kick off training camp today. pic.twitter.com/6Jxo5cd2ta

Khudobin is one of five goaltenders listed on the Dallas Stars training camp roster, however Ben Bishop is not participating due to a knee injury which could leave him away from the pipes until mid-March.

Bobbing between the AHL and NHL for the last few seasons, Nelson Nogier is hoping to earn his keep on the Jets opening night roster. The 24-year-old from Saskatoon was part of the final cuts in last summer’s pre-playoff training camp, and continues to hone his craft as a versatile, two-way defender. In 58 games with the Manitoba Moose (AHL) last season, he scored one goal and eight assists for nine points — the same output from the previous campaign over 74 games.

Listen to Nelson Nogier’s Blades Uncut interview by clicking the links below!

We did it.
We went Full Nelson.

Entering the final year of his entry-level contract, Libor Hajek is competing for a roster position in The Big Apple. He’s spent the majority of the last two seasons in the AHL with the Hartford Wolf Pack, but has shown glimmers of greatness when called up. In 28 games with the Rangers last season, Hajek collected five assists and 12 penalty minutes, and was routinely used in more shut-down, killing roles.

The New York Rangers have loaned Libor Hajek to @HCKometa of the Czech Extraliga. He's expected to return ahead of the regular season and take part in Rangers training camp. pic.twitter.com/kXY2QvVqxz

Two days prior to Christmas, Brayden Schenn received an early stocking stuffer — a letter “A” to put on his jersey. The Saskatoon product will serve as an assistant captain for the Blues, alongside Vladimir Tarasenko and Colton Parayko, while Ryan O’Reilly is taking over from Alex Pietrangelo as captain. This is the first time in Schenn’s career he’ll serve as an assistant captain for an NHL team.