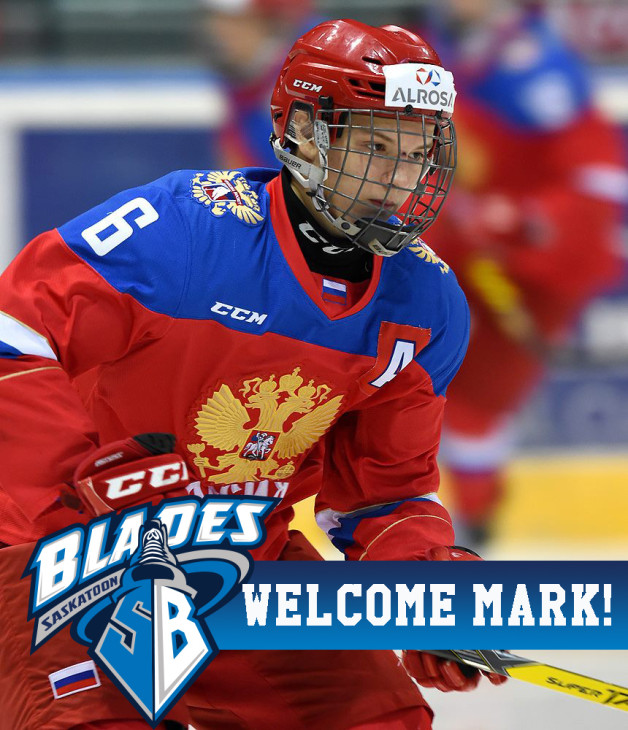 Mark Rubinchik has had a week to remember. First, the 17 year old Russian defenceman won a Bronze Medal at the Ivan Hlinka Memorial Tournament in Slovakia on Saturday. Today, he officially signed with the Saskatoon Blades.

In five games at the Hlinka Tournament, Rubinchik tallied 3 assists and 10 penalty minutes, being named player of the game once. A strong presence on the blue line for Team Russia, the Blades will be hoping Mark can do the same thing for their defensive unit.

“We’re really excited about Mark. He had a great showing at the Ivan Hlinka as one of the best defenceman in the world for his age group,” explained Blades General Manager, Colin Priestner. “I think his game is better suited for North American style, he plays big and physical, and I think he’s going to relish playing on a smaller ice surface.” Priestner also added the transition shouldn’t be too difficult for Rubinchik, who speaks fluent English after spending two seasons playing Bantam hockey in Detroit.

Rubinchik gained plenty of recognition at the Hlinka, which showcases the best players in the world under the age of 18. His hard-nosed style of play mixed with high-end offensive capabilities give Mark a high ceiling for potential. He was an instrumental piece to Russia’s late comeback against Canada last week, proving he can match up with players who already have a year of CHL experience under their belt.

“We know he’s excited about the NHL draft next Spring, and he’ll have the opportunity to improve with us. He’s a versatile player who will get a chance on the power play, penalty kill, and 5-on-5.” said Priestner.

The Blades organization is thrilled to have Mark, and welcome him to our team!