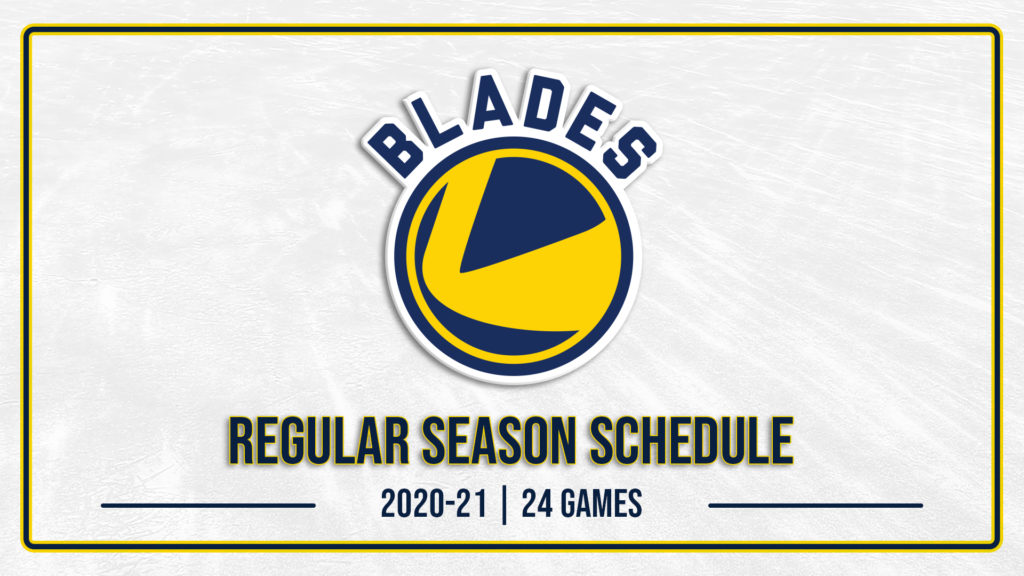 Calgary, Alta. – The Western Hockey League announced today the complete East Division schedule of games for the 2020-21 Regular Season, which is set to begin Friday, March 12 in the WHL Hub Center in Regina.

The WHL’s East Division will begin with a double-header on Friday, March 12, as the Moose Jaw Warriors host the Brandon Wheat Kings (4 p.m. CT) followed by the Regina Pats taking on the Prince Albert Raiders (8 p.m. CT).

The Saskatoon Blades kick off the 2020-21 regular season on Saturday, March 13, playing as the visiting team against the Swift Current Broncos at 4 p.m. CT. That’s the first of back-to-back contests for the Blue and Gold, ironically hosting the Regina Pats at 4 p.m. CT in the home opener on Sunday, March 14.

Blades and Raiders fans will get their first taste of the Highway 11 Rivalry on Friday, March 19 at 8 p.m. CT — the first of four games between the two foes. They’ll collide again on March 30 and April 8 before wrapping up the season series on April 22.

To view the entire 24-game regular-season schedule for the Blades, click here.

As previously announced, the WHL’s East Division will play all 2020-21 Regular Season games exclusively within the Hub Center located in Regina. The seven East Division teams will each play a 24-game schedule, which includes four against the other six Clubs.

The WHL has developed an extensive set of protocols and believe the protective Hub environment will provide a high standard of safety, for not only players and staff, but the Regina community at large. The WHL will implement an ongoing weekly private PCR testing strategy.

Enhanced screening for all WHL players, billets, team staff and officials will take place on a daily basis, including regular temperature screenings as well as symptom monitoring through the WHL Athlete RMS Mobile Application. Masks must be worn by all WHL players at all times with the exception of when participating on ice for games and practices. WHL coaches will be required to wear masks at all times, including while conducting practice and while behind the bench during games.

As the WHL returns to play in the WHL Hub Center in Regina, no spectators will be permitted to enter the Brandt Centre or Co-operators Centre.

WHL fans can look forward to taking in games across the whole league through the newly-launched WHL Live on CHL TV. More details available by visiting watch.CHL.ca.

A reminder for Blades season ticket holders — be sure to contact the Blades by emailing info@saskatoonblades.com or give us a call at (306) 975-8844 to take advantage of a special subscription offer for WHL Live.