MENU
Head on down to SaskTel Centre this week! 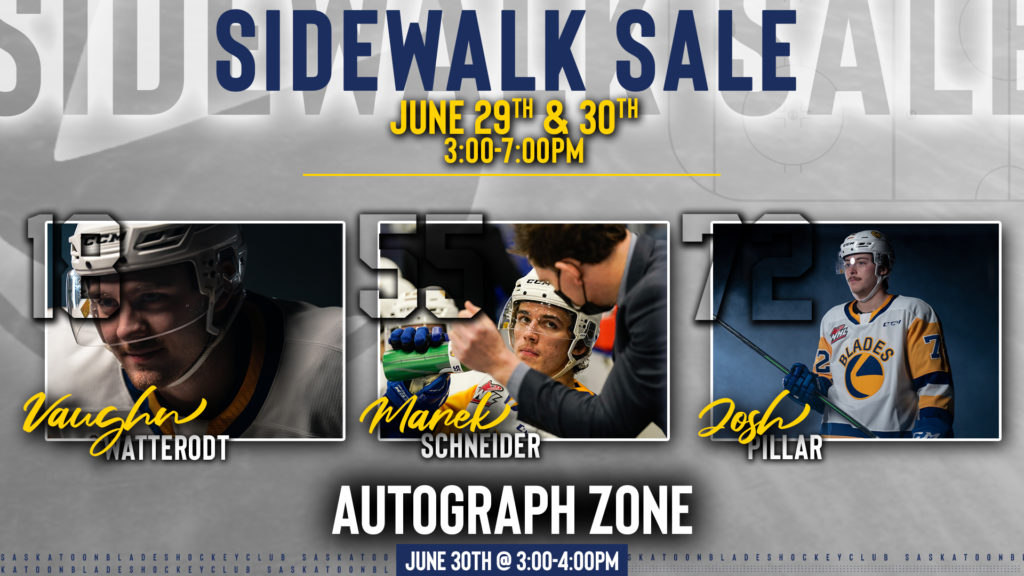 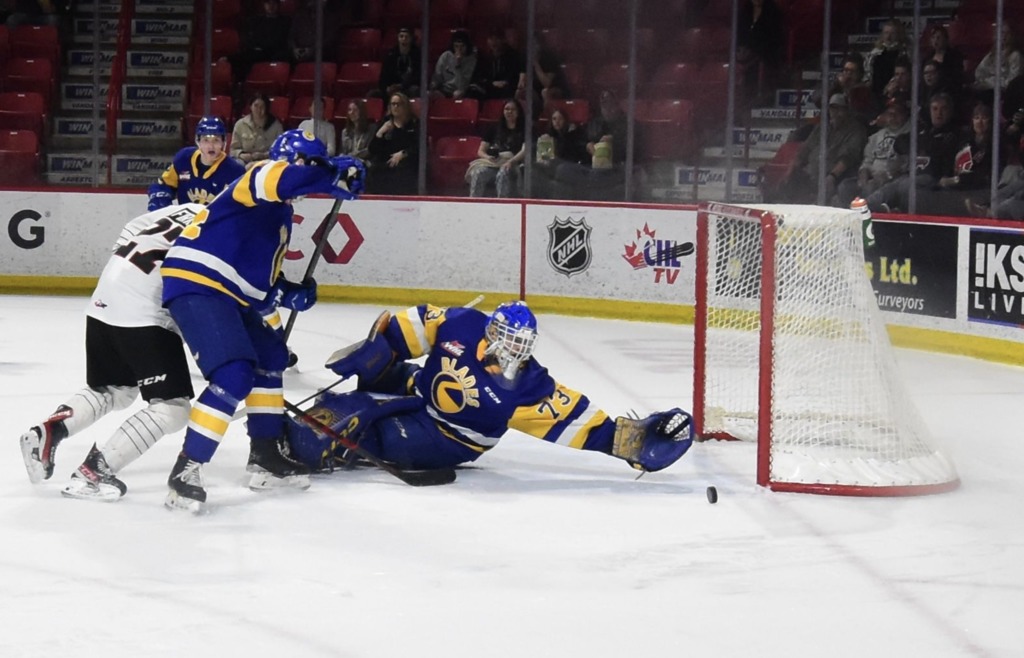 Jagger Firkus scored a pair of goals to lead the Moose Jaw Warriors to a 6-3 win in Game 5 of their opening-round series against the Blades, eliminating Saskatoon with a 4-1 series win.

Wong’s first of the post-season came when it was desperately needed most — trailing by two with less than ten minutes to go. Noah Boyko fed the former first-rounder in the slot and Wong made no mistake.

That was as close as Saskatoon would get. Atley Calvert regained Moose Jaw’s two-goal lead with just under four minutes on the clock. Saskatoon pulled the goaltender, and Robert Baco scored an empty netter.

Tempers officially boiled over with seconds left on the clock.

Jayden Wiens and Thomas Tien dropped the mitts in front of Tetachuk, ending with Tien’s lip bloodied and battered. Wiens was given an unsportsmanlike conduct penalty, while

Robins, who’s nursing a lower-body injury, collected an assist on the team’s first goal midway through the first period. Rhinehart scored the game-winning goal in Sakatoon’s lone victory over Moose Jaw in Game 4.

Maier, weeks separated from setting a new WHL record for most career wins, was sensational all series long. Arguably the greatest goaltender to ever wear the Pacman logo made 35 saves in his final appearance in blue and gold.

Three of Moose Jaw’s wins came at Mosaic Place after winning just twice on home ice against Saskatoon in the regular season. The Warriors will now take on either the Edmonton Oil Kings or the Winnipeg ICE, depending on how the series between Brandon and Red Deer pans out.

Moose Jaw was quick to strike, with Jagger Firkus notching his second of the playoffs 5:55 into the game. The Irma, AB product snuck into the slot and fired a snap-shot blocker side on Maier.

Saskatoon killed off the rest of Lisowsky’s high-sticking minor, and got to work on a powerplay of their own.

Pillar’s first of the night came off a bizarre play that left most of Mosaic Stadium stunned. Tristen Robins set up Lisowsky for a one-timer from the slot. The puck appeared to glance off Pillar before ricocheting straight up in the air. Calder Anderson of the Warriors attempted to swipe it away, but accidentally batted it into the cage with his glove.

Josh Pillar has us within one 😏 pic.twitter.com/ilPfugINx0

Moose Jaw entered the second period leading 2-1 with an 11-8 advantage on the shot tracker.

Firkus’s second of the night regained the Warriors’ two-goal lead at the 8:52 mark of the second period, but Pillar was there with the answer just a few minutes following.

The Minnesota Wild prospect corralled a rebound in the slot and fired it over the shoulder of Tetachuk, putting Saskatoon within one.

Back within one thanks to #72 🎯 pic.twitter.com/OET4VPPW2r

Just over a minute into the third, Trevor Wong was given a glorious opportunity to tie on a partial breakaway, but Tetachuk was there with one of his 26 saves on the night.

Moments later, Thomas Tien, playing in his WHL debut, capitalized on a breakaway to make it 4-2.

The roller-coaster contest continued with Wong parked in front, and breathing life back into Saskatoon’s sails. The Vancouver, BC product picked a great time to score his first of the playoffs, but it would ultimately end up short of a comeback.

Saskatoon now heads into the off-season, with its sights set on training camp in early August, and a fresh perspective on the 2022-23 regular season. Blades season ticket holders are encouraged to get in touch to renew their season tickets.

Blades Welcome Ashley Callingbull to the Organization
2 days ago