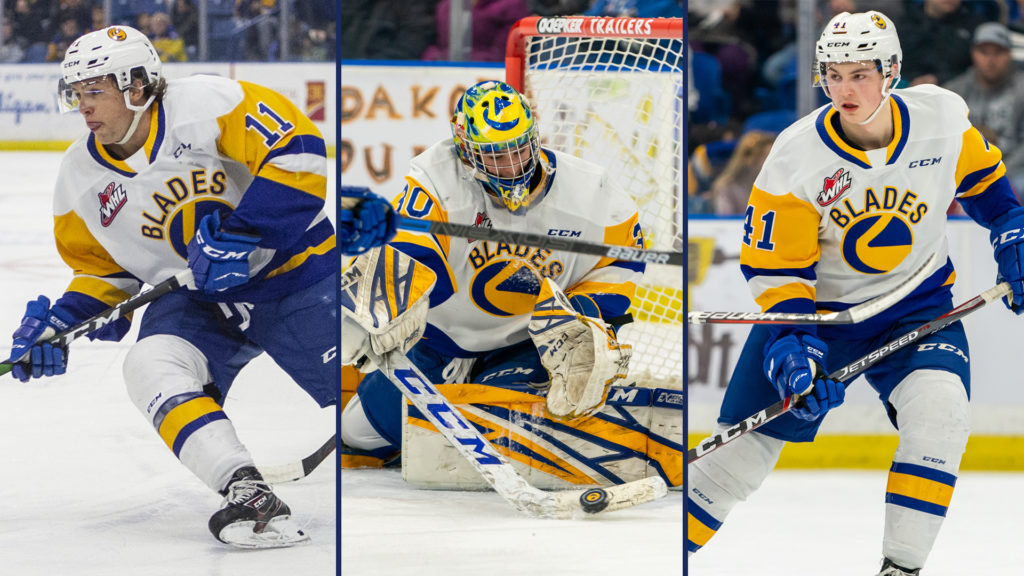 Rhinehart is ranked 111th of all top prospects in North America, projecting him to be drafted in the 4th round of the 2020 NHL Draft. The 6’4″, 205 pound blueliner has 15 points (3G-12A) through 38 games this season. Rhinehart made his Blades’ debut on Friday night after joining the team from the Prince George Cougars ahead of the WHL Trade Deadline.

Joining him on the rankings are sophomore forward Tristen Robins, who is ranked 134th, and rookie goaltender Koen MacInnes who is ranked 31st of all top goaltending prospects in North America.

Robins, projected to be drafted 5th round, makes the midterm rankings after being graded as a ‘C’ for the November edition of Central Scouting’s “Players to Watch” list. Though he will turn 18 this year, Robins’ late birthday means that this season is his first of NHL draft eligibility. He leads the Blades in both total scoring and assists with 37 points and 22 helpers. Additionally he is ranked second on the team in goalscoring with 15, and leads the team in shots on goal with 130.

MacInnes, who is in the midst of his first WHL season, cracks the midterm rankings which are the initial ranking from Central Scouting for goaltenders. Through 13 games played, MacInnes is carrying a .910 SVS% and a 3.00 goals against average. He won his first WHL start on the 2nd of October in Lethbridge, making 36 saves. On November 17th, MacInnes made 20 saves to for his first WHL career shutout against the Moose Jaw Warriors.