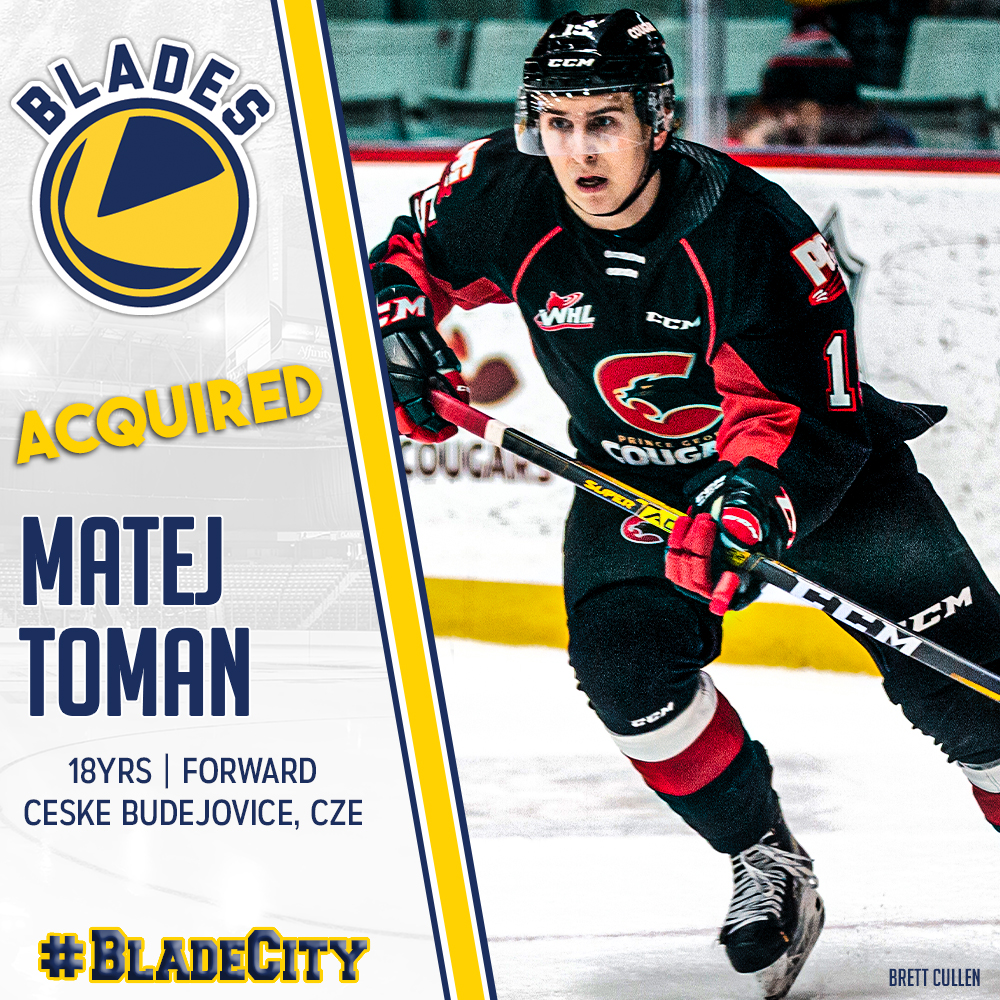 Saskatoon, SK –  The Saskatoon Blades have acquired ’01 Euro Import forward Matej Toman from the Prince George Cougars in exchange for a 6th round selection in the 2021 Western Hockey League Bantam Draft.

“Matej is a versatile forward who has experience playing all three forward positions,” said Blades’ General Manager Colin Priestner. “He has won over 56% of his face-offs this year and we feel he adds depth to our forward group. He was a high euro draft pick last year and has a strong international resume in addition to the WHL experience he gained in Prince George.”

Hailing from Czech Republic, Toman was selected 5th overall by the Cougars at the 2018 Canadian Hockey League Import Draft. Prior to being drafted by Prince George Toman, now 18-years-old, played for his hometown team HC Ceske Budejovice at the Under-18, Under-20 level and with the men’s team in the Czech Third Division.

Internationally, Toman won Bronze with Czech Republic at the 2017 World Under-17 Hockey Challenge, leading the Czech team in scoring with three goals in six games. He also represented the Czechs at the 2018 Hlinka Gretzky Cup in Edmonton and Red Deer, Alberta.

Since joining the Western Hockey League last season, Toman has recorded 26 points (12G-14A) in 82 games played. So far this season he has 6 points (3G-3A) through 16 games with the Cougars. Additionally, Toman represented the Czech Republic at the 2019 IIHF U18 World Championship in Sweden, scoring one goal in five games played.

Toman fills the open import spot on the roster which was opened earlier today following a trade that saw Saskatoon move Czech blueliner Libor Zabransky to the Moose Jaw Warriors. Toman is expected to join the Blades in Saskatoon immediately and could play as early as this weekend.

~ Chase Wouters & Nolan Maier are with Team WHL when they take on Russia in Saskatoon on November 13th for the 2019 CIBC Canada Russia Series, click here to buy tickets ~