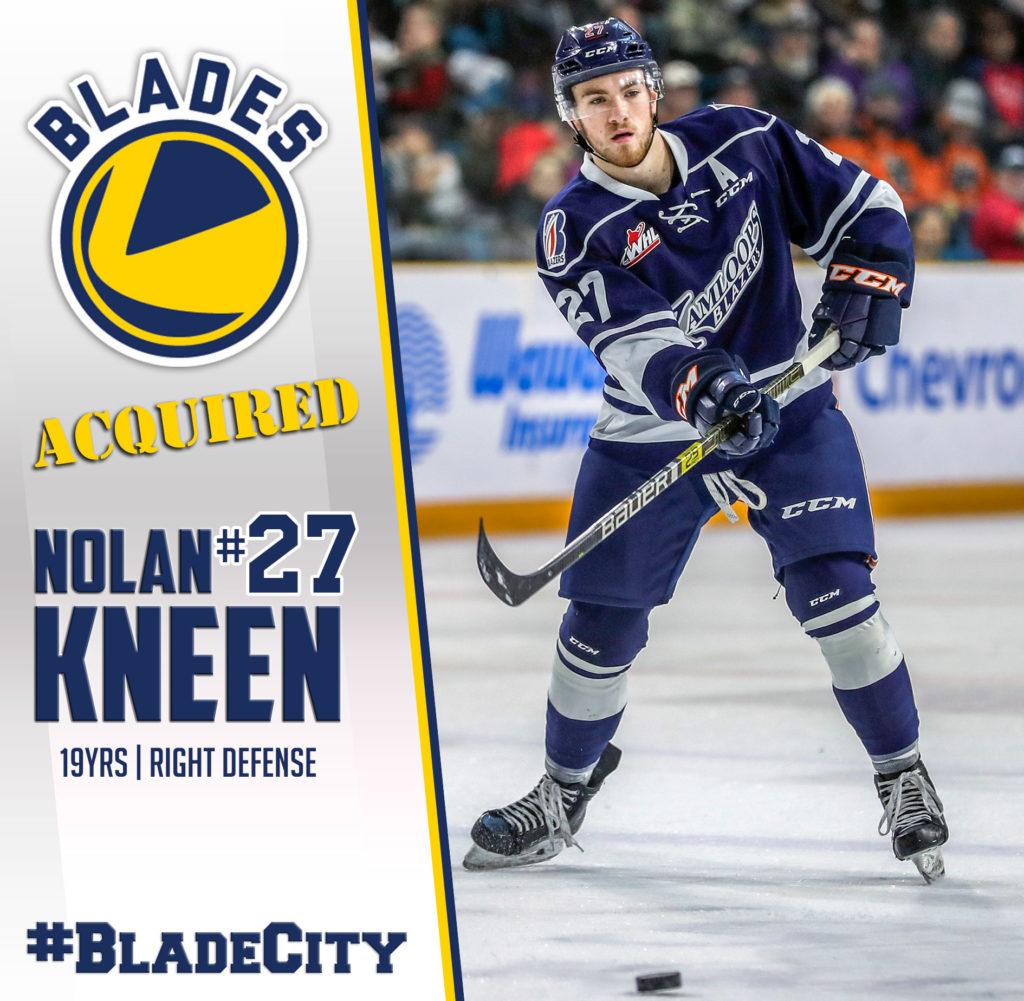 Langley, B.C. — The Saskatoon Blades have acquired 1999 born defenseman Nolan Kneen from the Kamloops Blazers in exchange for fellow 1999 born defenseman Jackson Caller, a 2nd round draft pick in 2020, and a 3rd round draft pick in 2020. The 2nd round pick going to Kamloops was acquired last season from the Regina Pats and the 3rd round pick was acquired earlier this season from Kelowna in the Michael Farren trade.

“Nolan is a top flight, right shot d-man who combines skill and toughness. Since last year’s (trade) deadline Nolan has been a top 10 point producer in the league amongst all defensemen and we feel he adds a lot to our group both this year and next,” stated Saskatoon Blades general manager Colin Priestner.

Kneen, a 6’0″ tall former 3rd overall WHL bantam draft pick, comes to the Blades with 216 career regular season games in the WHL along with 13 playoff games. During his career, Kneen has 14 goals, 60 assists, and 196 penalty minutes in those 216 regular season games. Born in Kelowna, British Columbia, but calling Duncan, B.C., home, Kneen has 4 goals and 20 points this season in 22 contests– good for 8th among WHL defensemen. He will join his former Blazers defence partner in Saskatoon, Dawson Davidson, who currently sits fourth among WHL defensemen scorers.

“There’s always a significant price to pay to add a top end 19-year-old, but we still have Regina’s 1st, Swift’s 2nd, and our 3rd round picks in 2020 so we feel we had the assets to make a deal like this happen,” Priestner explained before adding his thanks to Jackson Caller. “Jackson is an outstanding young man and did a great job for us both on the ice and in the community; he will be missed. Being able to send him to his hometown was a big reason we were comfortable in doing this trade and we’d like to thank him and his family for everything over the past two and a half years.”

Nolan Kneen is expected to join the Blades Monday in Langley and could make his debut in the pacman sweater as early as Tuesday when Saskatoon visits the Vancouver Giants. He will wear jersey #27.