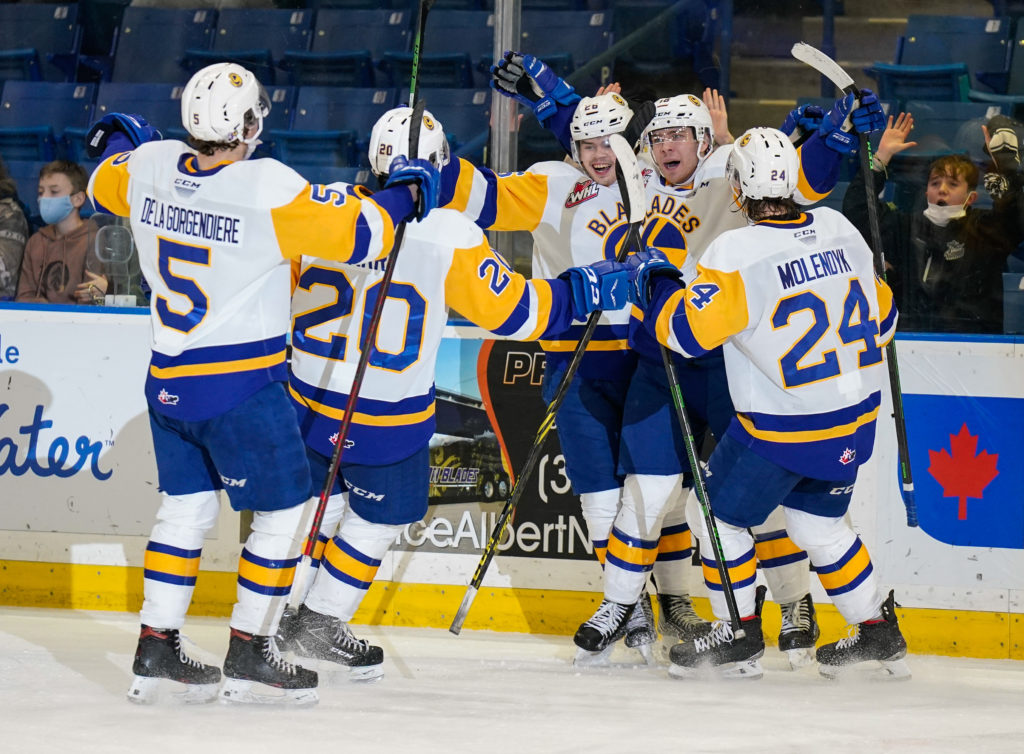 SASKATOON, SK — Vaughn Watterodt waited 30 games to feel what it’s like to score in the Western Hockey League, and it came at the perfect time.

The Rosetown, SK product’s first career goal was the insurance marker in a 4-1 victory for the Blades over the Swift Current Broncos at SaskTel Centre on Saturday.

Watterodt sent a wave of relief to the thousands of cowboys and cowgirls celebrating Western Night at SaskTel Centre, dropping to one knee in celebration while ripping the figurative monkey from his back.

Following the game, Watterodt told reporters this was the first game his grandma witnessed him play in the WHL, adding to the special occasion.

The Blades win completes a home-and-home sweep over Swift Current, following up a 6-4 decision at Innovation Credit Union iPlex on Friday.

Nolan Maier earned the game’s first star with 28 saves, while alternate captain Kyle Crnkovic scored twice to increase his team-lead total to 21 goals. Crnkovic is now up to 50 points on the season, second among all players in the WHL.

Fellow alternate captain Tristen Robins netted a goal and added an assist to follow up his hat-trick the previous night in Swift Current.

Saskatoon will look for a third straight victory next Friday, hosting the Medicine Hat Tigers in Girls Rock! Night and donning a record of 19-14-1-1.

6:41 into the first frame, Crnkovic and defenceman Tanner Molendyk came together for a beautiful play to open the scoring. Molendyk threw a delicate saucer pass to the front of the net, and Crnkovic chipped home his team-leading 20th of the campaign.

Kyle Crnkovic's 20th of the year is a thing of beauty 🤩 pic.twitter.com/UYCm33vzaZ

Following up his third career hat-trick the previous night, Robins continued his scoring surge later in the frame. The San Jose Sharks prospect ripped a one-timer set up by captain Aidan De La Gorgendiere on the powerplay, giving the Blades a 2-0 lead.

Tristen Robins is on a heater, folks 🔥 pic.twitter.com/Cd99H6o889

Swift Current found the scoreboard early in the second period, cutting Saskatoon’s lead in half. Broncos alternate captain Caleb Wyrostok netted his eighth of the season while Molendyk sat in the box for a questionable holding penalty.

No shortage of boiling tempers between these two provincial rivals, with both squads throwing several punches at times throughout the second. Import forward Egor Sidorov got tied up with Wyrostok after a faceoff was called back in the attacking zone, earning both players unsportsmanlike conduct minors.

Seconds later, Robins caught a Broncos forward with a high-stick and earned a two-minute minor, joining Sidorov in the box. Saskatoon killed off the ensuing 4-on-3 powerplay.

Nolan Maier rose to the challenge when Swift Current began applying pressure late in the second, stopping several point-blank opportunities. The veteran tender stopped 21 of 22 shots through the first 40 minutes of play, and continued to provide the Blades backbone in the third.

It took more than 17 minutes of third period action for Watterodt to net the insurance marker. It came off an odd-man rush in the attacking zone, with Spencer Shugrue, a defenceman bumped up to centre, throwing a hard shot on goal. Watterodt’s hand-eye came in good use, deflecting the puck behind Poulter for his first of his career.

Next up, Saskatoon will welcome the Medicine Hat Tigers to SaskTel Centre for Girls Rock! Night next Friday. Doors open at 6:00pm with puck drop set for 7:00pm.