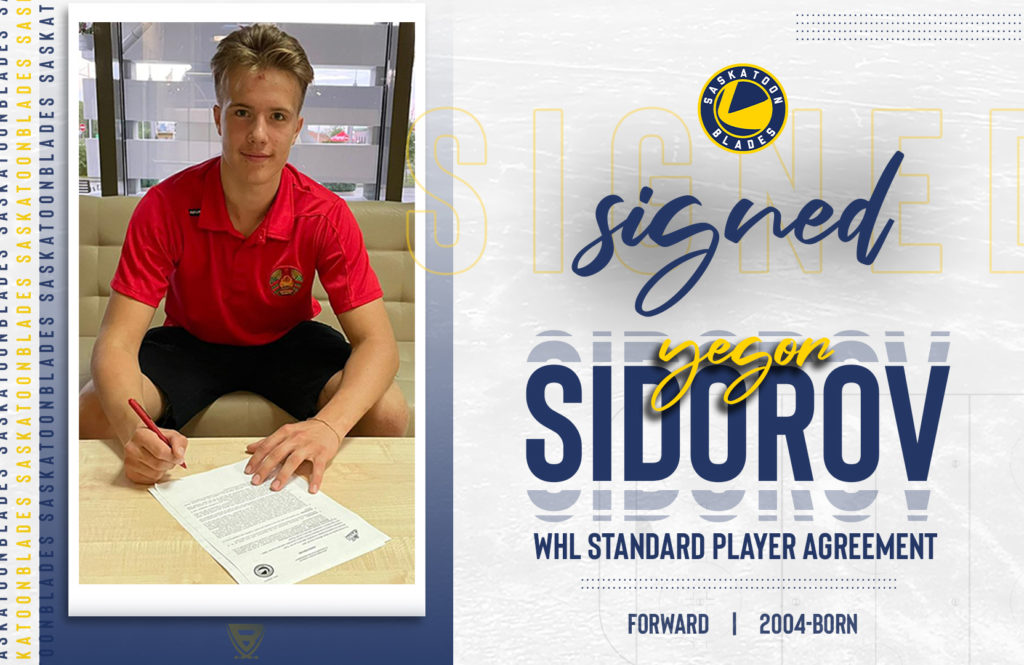 SASKATOON, SK — The Saskatoon Blades have signed European forward Yegor Sidorov to a WHL Standard Player Agreement. Sidorov was selected in the 1st round, 20th overall in the 2021 CHL Import Draft, and is expected to fly to Saskatoon later this summer and join the team for training camp ahead of the 2021-22 regular season.

Born and raised in Vitebsk, Belarus, Sidorov spent last year playing and training under his home country’s national U17 and U18 development programs. The majority of his workload came as an underage forward in the U18 ranks, dressing in 24 games and racking up 14 points (7G-7A) along with 10 penalty minutes.

In April, the 5-foot-10, 154-pound playmaker left a noticeable impression in the U18 World Hockey Championships. Sidorov wore his nation’s colours as an underage forward, and led Team Belarus with five assists in five games, finishing 2nd in team scoring.

“Yegor had an outstanding tournament in Dallas this year as an underaged player at the World U18’s showing an elite level of vision and playmaking,” stated Blades General Manager Colin Priestner. “We feel he has a lot of upside and the potential to be an early selection in the upcoming NHL Draft. We’re thrilled to have him commit to us this season to help him achieve his hockey dreams.”

Sidorov is the first Belarus-born player to be selected by the Blades since the CHL Import Draft was introduced in 1992. He was one of two players to hear their name called by the Blades in this year’s draft, preceding 107th overall pick Moritz Elias of Germany. He’s eligible to be drafted by an NHL team in 2022.

The Saskatoon Blades Hockey Club would like to welcome Yegor and his family into the organization, and are thrilled with his decision to continue his development in Blade City.

Season ticket renewals along with new memberships for the 2021-22 regular season are now on sale for as low as $17 per game for adults, and $5 for children. Fans are encouraged to contact the Saskatoon Blades front office by calling or texting (306) 975-8844, or by emailing info@saskatoonblades.com for more information. We are thrilled to bring our passionate fanbase back into SaskTel Centre in a safe, healthy environment for all.