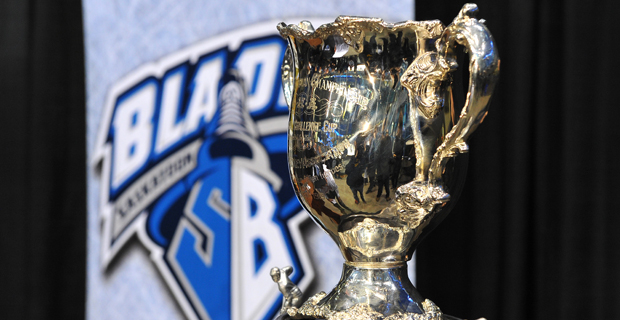 The Saskatoon Blades are very proud to announce the acquisition of left-winger Michael Ferland from the Brandon Wheat Kings.

In exchange for the 20 year old Calgary Flames prospect, the Blades have dealt a 1st round pick in the 2013 WHL Bantam Draft.

Ferland was recently re-assigned to the WHL from the Abbotsford Heat of the AHL and is currently in his 4th WHL season.  The product of Brandon, Manitoba has appeared in 4 games this season, posting a goal and an assist.  Last season he had a career year for the Wheat Kings, putting up 47 goals and 96 points in 68 games.  He also put up 84 PIMs and a +17 rating last season for Brandon.

Ferland is a former teammate of Blades captain Brenden Walker and was drafted in the 5th round, 133rd overall, in the 2010 NHL Draft by the Flames.

“Michael is a player who really generated some interest after being sent back to the WHL recently,” said Blades Head Coach and General Manager Lorne Molleken. “He’s a big, power forward who we are really familiar with.  He comes from a  great program in Brandon and we think he can be a big difference maker for our club down the stretch and looking ahead to the playoffs.  He’s really a well-rounded kid who can do a ton of things on and off the ice.”

The Saskatoon Blades would like to welcome Michael and his family to the organization.